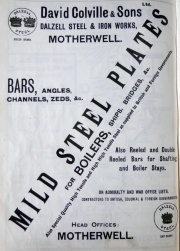 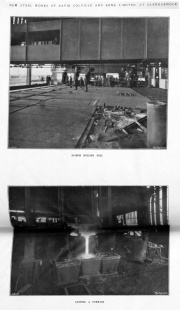 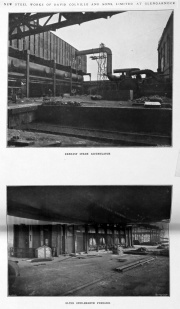 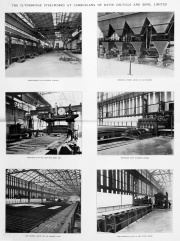 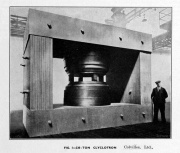 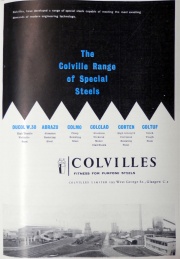 Colvilles, of Dalzell Steel Works, Motherwell, near Glasgow, and Ravenscraig.

1880 The firm switched to steel production. To meet the rapidly-growing demand for mild steel in boilermaking and shipbuilding, David Colville built the Dalzell steel works on ground adjoining his ironworks, manufacturing steel by the Siemens process. The new plant was completed by February 1881[1]

1880 'HUGE CASTING. Yesterday morning operations were commenced at Dalzell Steel Works Motherwell, for casting an anvil that has been in process of moulding for a steam hammer. The weight of the block is 140 tons, being the heaviest in Scotland. The base is 12 feet 6 inches by 11 feet and 7 feet in depth. The anvil is cast upon the seat it is to occupy with the top side down, to ensure strength and solidity of metal. When cooled, which will take a month, it will then be turned upside down with screw-jacks. The cupola, which was a temporary erection, melted 10 tons of metal per hour. Every charge of the molten metal flowed into the bottom of the mould, and a foot of sawdust was kept upon the top of the metal to keep it in a boiling state. This being the largest casting that has ever taken place in this part the country, it was visited during the day by a large concourse of spectators, and was very satisfactorily concluded about nine last night.'[2]

Previous attempts at making steel using the high phosphor content Scottish pig iron had failed but the adoption of a new open-hearth method by Colvilles allowed the firm successfully to burn impurities and carbon out of the crude material, thereby mass-producing steel cost-effectively.

Steel quickly became cheaper to produce than wrought iron and demand from the Clyde’s shipbuilding industry, plus new industrial projects, ensured that the Dalzell furnaces were much in demand as the 19th Century drew to a close.[3]

1895 The loans from J S Napier were repaid John was elected to Parliament. The company was incorporated as a private limited company. John Colville was the first chairman of the limited company.

1898 David Colville died. David junior was the driving force behind the policy of expansion and continuous modernization which by the eve of the First World War made the firm the largest in the Scottish steel industry and second only to Dorman Longs in Great Britain. His brother Archibald grappled with the commercial and financial implications of his David's plans. David sought and adopted the latest steelmaking practices, dealt ruthlessly with the growing and increasingly well organized labour forces and secured the loyalty of the senior managers by offering them shares in the company.

1916 Colvilles also purchased Glengarnock Iron and Steel Co and, as enemy submarines had become active, the Ministry requested Colvilles to undertake large expansions, to meet the acute demand for steel plates to build Standard Ships. The enlargement of both works began in October 1916, at a cost of £1½ million.

Also gained control of the Fullwood foundry, and purchased the ordinary shares of a major colliery company, Archibald Russell Ltd, in order to safeguard fuel supplies for the steel works.

1916 Both David and Archibald died. John Craig took on the management of the firm.

1916 Harland and Wolff with John Brown and Co acquired a large share in the Motherwell steel works of David Colville and Sons, together with their collieries, to supply the yards.

1919 The Engineer published a summary of the company's history, read it here.

1931 The Lithgow brother agreed to merge their holdings in James Dunlop and Co with David Colville and Sons, as a consequence of which they joined the board of the Colville companies, forming Colvilles. It was decided to centralize pig iron manufacture at the former Dunlop's Clyde Iron Works. This resulted in the blast furnaces at Glengarnock closing down and the old rolling mill was also closed down.

"The Clydebridge Steel Works of David Colville and Sons, Ltd., are equipped for an output of over 5000 tons of plates per week, and, so far as the new portion of the works is concerned, represent the latest methods in steel works practice. Before giving a detailed account of the new plant, which we propose to so in what follows, reference may be made to the origin of the Clydebridge works and the development which has taken place during the last ten years." From The Engineer 1923/08/31.

Read the articles on The Clydebridge Steel Works: