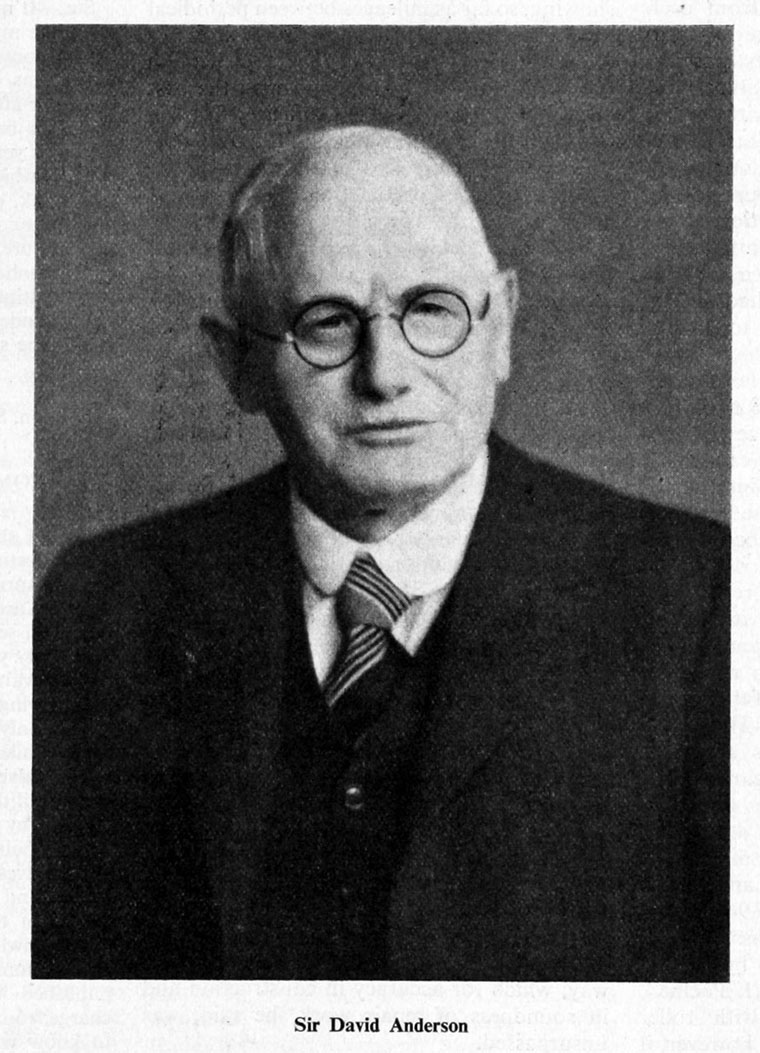 We regret to record the death of Sir David Anderson, which occurred on March 27th, at his Scottish home, Dura House, Cupar, Fife. Sir David was president of the Institution of Civil Engineers in the session 1943-44, and was well known for his work on the design of bridges and tunnels.

He was born on July 6, 1880, at Leven, Fife, and his general education was at Dundee High School; he studied civil engineering at St. Andrew's University and obtained his degree (B.Sc.) there in 1900.

He then served a period of practical training first at the Glasgow works of Sir William Arrol and Co., Ltd., and later, in 1905, he came to London and served under Sir Benjamin Baker.

Sir Benjamin Baker had delegated the construction work on the widening of Blackfriars bridge to Mr. (later Sir Basil) Mott, and Sir David was appointed resident engineer for that widening work in 1906. Sir Benjamin died early in 1907.

Sir Basil Mott had been associated for some years with Sir Benjamin on the design of the City and South London tube railway and the Central London tube railway, and Sir David took part in many later works on these railways. He was also engaged on several important bridge works at about this period, notably the new Southwark bridge across the Thames and, at Rochester, the bridge across the Medway. He was chief assistant to Sir Basil Mott at that time.

In the first world war Sir David served in the Royal Engineers and completed his military service as a captain.

In 1923 be became a partner in the firm of Mott, Hay and Anderson, and from that date until his death he continued in practice as a consulting engineer.

Sir Basil Mott and Mr. David Hay had been in partnership for a number of years prior to 1923, and had been responsible for some important bridge and tunnel works. The firm entered a period of great activity following the war, and Sir David, in collaboration with his partners, was concerned with the design and construction of numerous important projects for bridges and tunnels. The best-known of them was, undoubtedly, the Mersey Tunnel between Liverpool and Birkenhead, which was opened after about nine years' work, by H.M. King George V in 1934. The Mersey tunnel was the first subaqueous vehicular tunnel to be built in this country since the internal combustion engine revolutionised transport on the roads; it was the largest work of its kind in the world, with a length between portals of 10,584ft, the length with branches being 13,800ft, and was considered a masterpiece of its kind. A description of the design and construction of the Mersey tunnel, and a statistical comparison with other contemporary tunnels was given in our issues of July 13 to 27, 1934.

However, the firm was also concerned with other tunnel projects of some magnitude, including the Dartford-Purfleet tunnel under the River Thames. This work was started and the first part of it - the pilot tunnel - was completed, but the construction of the full-size vehicular tunnel was deferred and has not yet been started. Sir David's firm was associated in this work with Messrs. Coode and Partners.

Sir David's firm also car1ied out a great deal of work on London's underground railway systems; two of their achievements may be given by way of example - the North-Eastern extension of the Central line, the Ilford extension, as it is sometimes called, and, earlier, the Morden extension of the Northern line.

With the austere conditions which have prevailed since 1945, new tunnelling works have been virtually at a standstill; however, the paper presented by Sir David at the 1951 Joint Engineering Conference, entitled "Underground Railway Planning and Construction," described some new works which have been designed, although they have not yet been built, and gave an interesting survey of the problems faced to-day in the construction of new underground lines. A particularly interesting discussion was stimulated by Sir David's paper, as noted in a leading article in our issue of June 22, 1951.

Apart from the design of tunnels and bridges, Sir David's firm has, in recent years, undertaken the civil engineering design of several of the British Electricity Authority's new power stations, notably at Bankside and Deptford in London, and at Ferrybridge, in Yorkshire.

Sir David's position as senior partner of the firm brought him no little responsibility for these works, as with all the schemes which the firm undertook. But one of his principal interests lay with the design of several ambitious projects for bridges. The Severn suspension bridge, designed by Sir David's firm in collaboration with Messrs. Freeman, Fox and Partners, has been described in these columns on several occasions, and will be familiar to many readers on account of the extensive wind tunnel tests carried out on models of the bridge.

Another design for a long-span suspension bridge upon which he was engaged was that of the bridge across the River Forth. Construction of these bridges has not been possible under existing Governmental policy, but we understand that work will soon be commenced on another bridge project with which Sir David was particularly concerned, the proposed bridge across the River Mersey and the Manchester Ship Canal between Runcorn and Widnes.

Sir David Anderson's work included service on a number of technical committees for the Government, some of them of no little importance. He was chairman of the Professional Institutions' committee on improved Methods of Steel Utilisation, which was set up by the Ministry of Works in 1949, and included in his other work of this nature was membership of the committee assisting Sir John Anderson (now Lord Waverley) on shelter policy prior to the war. Sir David was technical adviser to the Minister of Home Security during the war, and he was a member of the Building Research Board of the D.S.I.R.

He was created a Knight Bachelor in 1951, and in 1936 he received an honorary degree - of LL.D. from the University of St. Andrews. He was a member of the American Society of Civil Engineers, and the author of several papers read before the Institution of Civil Engineers. As mentioned earlier, he was president of the Institution in the session 1943-44; his presidential address in that session was of particular interest, in that it was concerned, not with purely technical matters, but with the part which engineers should play in the direction of the country's affairs generally, a subject upon which Sir David held firm and progressive views. The skill and ingenuity that had been used for purposes of destruction in time of war could and should be used, Sir David emphasised, for purposes of construction and improvement in times of peace.

The heavy responsibilities carried by the modern civil engineer were largely ignored by the modern layman, he contended. "It is high time," Sir David said, "that the engineer who has perhaps rashly and blindly created modern life, should now be associated with the control of it and help in directing its future shape. Let all of us refuse to sink into the position of being merely technicians - of which there is a real danger in our absorption in our profession; let us rather take the position of planners and leaders. We shall need to equip ourselves for such a position. That is a difficult problem and will require careful consideration."