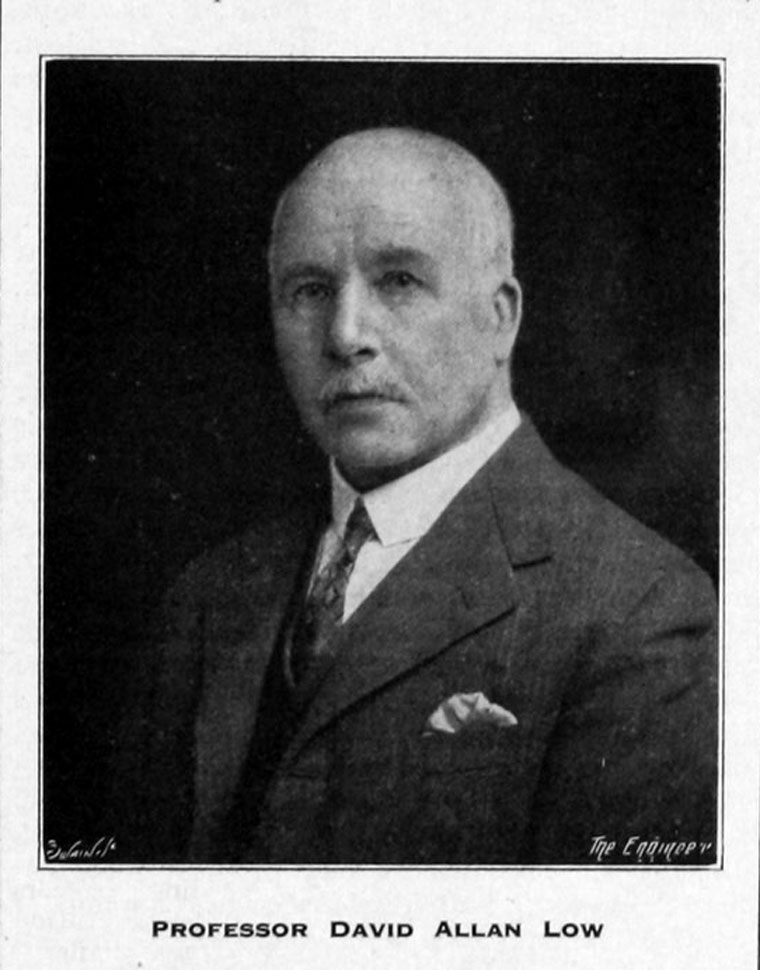 1887 Lecturer in engineering and head of the technical department of the People's Palace Technical School, London.

1888 Joined the Inst of Mech Engineers

Professor DAVID ALLAN Low will be remembered not only for his remarkable gifts as a teacher of engineering, but also for his famous textbooks, " A Manual of Machine Drawing and Design" (written in conjunction with Mr. A. W. Bevis), "Applied Mechanics," and "Heat Engines." He was also the author of "Practical Geometry and Graphics " and the compiler of a valued "Pocket-Book for Mechanical Engineers."

Professor Low was born at Dundee in 1857 and was educated there at the West End Academy. He was apprenticed from 1871 to 1876 to Messrs. Baxter Brothers, of Dundee. In the following year he obtained a Whitworth Scholarship and studied at Owens College, Manchester. After a year's employment in Sir Joseph Whitworth and Company's works he went to the University of Glasgow, where he continued his studies for two years. He received his first teaching appointment, as lecturer in mechanical engineering at Allan Glen's Institution, Glasgow, in 1880. In 1887 he became headmaster of the Day Technical School for Boys at the People's Palace, Mile End Road, London, where he also lectured on engineering subjects. This school was known from 1896 as the East London Technical College (later known as East London College and included in the colleges of the University of London, and now renamed Queen Mary College) and in that year Mr. Low was appointed Professor of Engineering. During the following years he gained his remarkable reputation as a teacher. On his retirement in 1913 he was made emeritus professor. His long association with the Institution dated back to 1888, when lie was elected a Member. During his retirement he was connected with the development of the Whitworth Society, and acted as Honorary Editor of the "Whitworth Book," published in 1923. Much of the material for this work was gathered in the Institution Library. Professor Low died at his home at Ilford, on 24th March 1937.