Grace's Guide is the leading source of historical information on industry and manufacturing in Britain. This web publication contains 146,106 pages of information and 231,598 images on early companies, their products and the people who designed and built them. 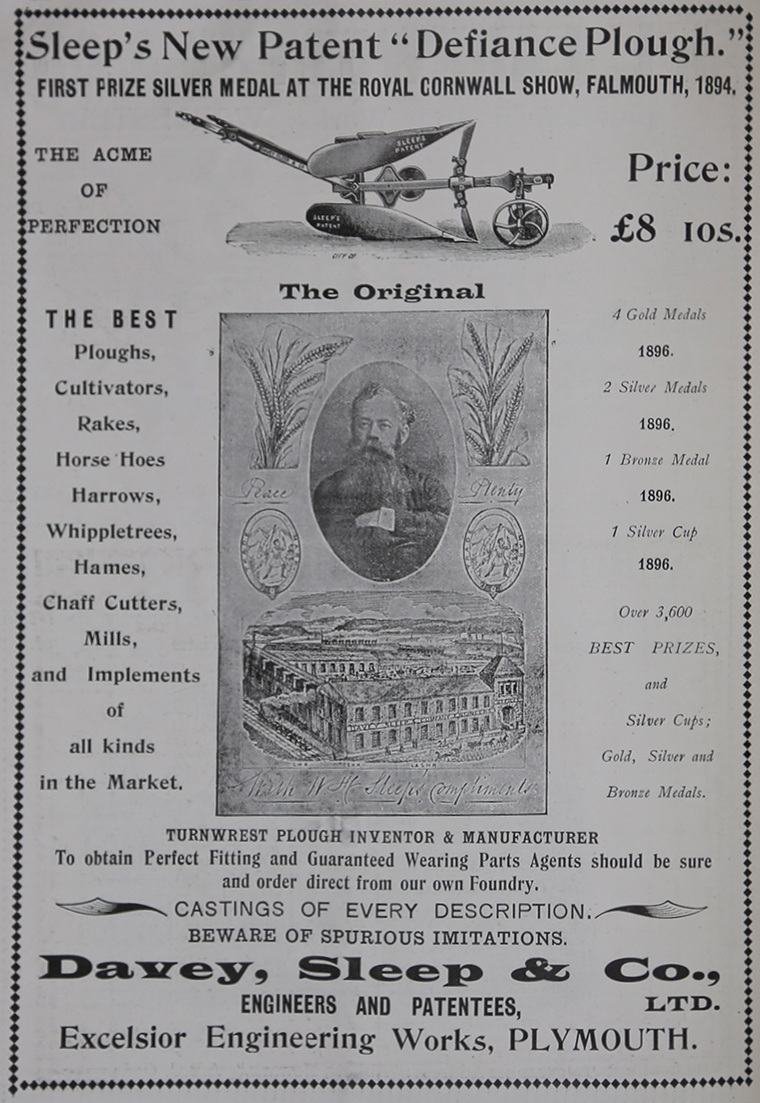 1893 Royal Agricultural Society’s Show, Chester. MESSRS. DAVEY, SLEEP, HARRIS & CO., PLYMOUTH. A good assortment of the agricultural implements made by this firm was exhibited, including a variety of their turn-wrest ploughs, of which four different kinds have been awarded prizes from the Royal Agricultural Society of England, and two gold medals and diploma of merit at the Melbourne International Exhibition. Mr. Sleep has brought these ploughs to their present high state of perfection, as the result of experiment and experience, always aiming at simplicity in the design and construction, and special attention has been given to ensure their being easily managed in work by ordinary farm labourers. The " Invincible " plough is fitted with a lever neck, by means of which the point of the share can be regulated to any desired depth, and the plough is so constructed that it can in two or three minutes be converted into a digging plough by simply changing the breasts, which can be done by any ordinary labourer. The firm's portable "Acme" horse-rake (Sleep's patent) is a very excellent machine, and is remarkable for its simplicity of construction, perfection of detail, ease in its management, and lightness of draught. Being made almost entirely of steel, it is exceptionally strong and durable....[3]

1894 Excelsior Works, Embankment Road, Plymouth. In the Western Counties no firm enjoys, or has enjoyed, a higher reputation than that of Messrs. Davey, Sleep & Co., of ‘Excelsior’ Works, Embankment Road, Plymouth, who hold a leading position in their own line of operations, maintained by a consistent application of the latest scientific improvements to all the work for which they are responsible. The works occupy a triangular piece of ground of considerable extent at the north-eastern extremity of the town, and comprise a spacious block of buildings having an area of 103,000 square feet, fitted up with all necessary appointments for the carrying on of their extensive business, and for the manufacture of the many machines with which their name is identified. Mr. William H. Sleep’s experience has been quite a page in the romance of trade, for, according to a writer, he began life almost friendless and penniless, yet by honourable industry and thrift he finds himself, after a long and useful career, the head of one of the West of England’s well-known agricultural engineering firms, and this at an age (56) when, in the ordinary course of affairs, the business world should for some time yet continue to benefit by his presence. Born in 1837, and left an orphan at the age of ten, he began life as a farm boy at Mevagissey, Cornwall. Later on he became apprenticed to the village blacksmith, where, not content with shoeing horses, he occupied a scanty and hard-earned leisure by teaching himself “the three R’s.” The five years of his apprenticeship having expired, he obtained work under another smith, and brought out a new plough. It was favourably received, and from that time the young inventor’s active brain was constantly at work, thinking how he could improve the, at that time, somewhat primitive types of agricultural implements with which the British agriculturist was then content. His list of honours embraces prizes and medals from most of the leading agricultural societies, and upwards of 3,116 prizes is the record in this direction; during one year the firm were awarded forty-seven prizes, two silver medals, and one silver cup, whilst at the Warwick trial in connection with the Royal Agricultural Society of England, 1892, they were awarded the first and second prizes for their celebrated turn-wrest ploughs. These facts speak volumes for the excellence of their productions. It is the same with other articles – rakes, cultivators, harrows, rollers, drills, whippletrees, distributors, cutters, cake breakers, horse gear, elevators, etc; in every direction improvement has followed improvement, until each of the finished articles is as perfect as a combination of ingenuity and mechanical skill can make it. A large number of competent workmen, under the direction of skilled foremen, are employed in the several departments of the trade, supervised by Mr. William H. Sleep, whose portrait we give; and no effort is spared to render the establishment perfect, or as near to perfection as it is possible to attain in such an elaborate concern.[4]

1907 Royal Cornwall Agricultural Show, Liskeard. Stand 29. Davey, Sleep & Co Ltd., are exhibiting their celebrated Horse Rakes, Hoes, Ploughs &c. All interested in agriculture should call at this stand, where recent improvements in this firm’s manufactures can be inspected and explained.[6]