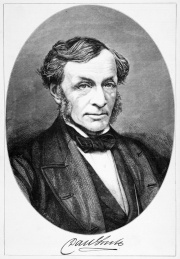 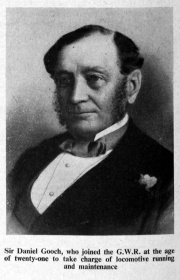 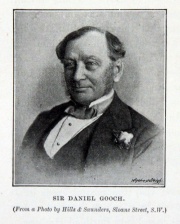 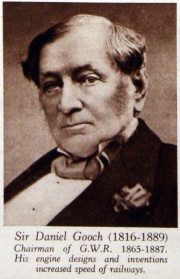 1846. The Lord of the Isles engine for the Great Western Railway.

1847. The 'Corsair' engine for the Great Western Railway.

1851. The Lord of the Isles as shown at The Edinburgh Exhibition.

1816 August 24th. Born in Bedlington the son of John Gooch of Bedlington and his wife Anna the daughter of Thomas Longridge of Newcastle.

As a young boy Gooch met George Stephenson and, as soon as he was old enough, he became an engineer at the the locomotive factory owned by Edward Pease and Robert Stephenson, in Newcastle-upon-Tyne.

Gooch went on to work in the Tredegar Ironworks foundry, in South Wales.

1837 Aged twenty-one, Gooch was appointed locomotive superintendent of the Great Western Railway and soon took advantage of the broad gauge favoured by Isambard Kingdom Brunel who was the company's chief engineer, as his locomotives were much faster than those previously made. Gooch's locomotives could haul a large load at 60 mph (96 kph). Gooch designed 340 locomotives in all and these included the Great Western and the Iron Duke.

1849 The 4-4-0 saddle tank engines built in 1849, were amongst the most interesting of Gooch's designs. The type of bogie, which with minor modifications was in use until May, 1892, swivelled on a ball and socket joint, the socket being connected diagonally with the horn plates by four strong forgings, 5in. deep by 11 1/8in thick.[1]

1864 Daniel Gooch worked for the Great Western Railway for twenty-seven years, but resigned in 1864 to concentrate on developing telegraphic communication. Gooch became chairman of the Telegraph Construction and Maintenance Co (Telcon) and director of the Anglo-American Telegraph Co.

1865 In the General Election Daniel Gooch became MP for Cricklade. Later that year, when the Great Western Railway got into financial difficulties, he agreed to resume chairmanship and the company's profits soon returned. As chairman of the company he fully supported Brunel's proposal to build the steamship, the Great Western.

1885 On leaving Parliament, Gooch continued as chairman of the Great Western Railway.

Fortunately, Gooch kept voluminous diaries, and collected extracts were first published in 1892, and reissued in 2006 [4]. Approximately half of the book is devoted to a fascinating account of his work in connection with the first successful transatlantic telegraph cables.