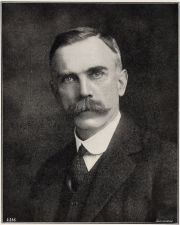 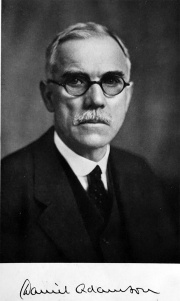 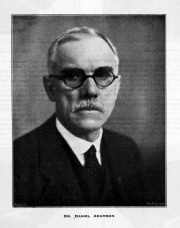 Dr. DANIEL ADAMSON died on 11th October 1930, less than a year after the end of his term of office as President of the Institution. He had been an active Member of the Institution since 1897 and was elected to the Council in 1918, becoming a Vice-President in 1923. It was during his Presidency, whilst at the Manchester Summer Meeting, that the honorary degree of Doctor of Science was conferred upon him by the University of Manchester.

Dr. Adamson was born in 1869 and commenced his apprenticeship in the shops at the age of 16, at the same time attending evening classes at the Manchester School of Technology.

His apprenticeship was divided between the works of Messrs. Scott and Hodgson of Guide Bridge and those of Messrs. Joseph Adamson and Company of Hyde, founded by his father in 1874. In 1893 he was promoted to be works manager, and in 1904 he and his brother Harold entered into partnership with their father.

Since 1925 he had been sole proprietor of the firm. Dr. Adamson was a pioneer in the development of the electric crane, for after a visit of his to the United States in 1893, the firm commenced the building of electric cranes by constructing one of the first three-motor overhead cranes in this country. The firm also innovated the flanging of boiler ends by hydraulic machinery, and in addition to complete Lancashire and waste-heat boilers, manufacture flanged plates for many other boilermakers.

Dr. Adamson took a keen interest in engineering research throughout his career, and it was in recognition of his valuable services in this respect that he received his honorary degree. His Paper on Wire Ropes before the Institution in 1912 preceded the work of the Wire Ropes Research Committee of which he was for many years Chairman, and in 1917 he was awarded the Institution's Thomas Hawksley Gold Medal for his Paper on Spur-Gearing.

He was also a member of the Cutting Tools Research Committee and had been instrumental in organizing the experiments with high-speed cutting steels carried out by the Manchester Association of Engineers, of which body he was President in 1895. One of the last achievements of his career was the Institution's newly formed Welding Research Committee for which he was mainly responsible.

Since 1904, when Dr. Adamson visited the Continent to investigate the possibilities of water-gas welding in connexion with steam-boilers, he had been keenly interested in the subject of welding, and as long ago as 1920 he suggested lines along which such a research might be undertaken by the Institution.

Dr. Adamson was also a Member of the Institutions of Civil Engineers and Electrical Engineers.

Born at Newton Manor in 1869, he was the son of Joseph Adamson, boiler-maker and engineer at Hyde, and grand-nephew of Daniel Adamson, the pioneer of the Manchester Ship Canal.

His apprenticeship was divided between his father's works and those of Messrs. Scott and Hodgson, while he attended the Manchester School (now College) of Technology as an evening student.

In 1904 Dr. Adamson and his brother Harold were taken into partnership in their father's business; in 1925 he became sole proprietor of the firm with his two sons as partners. Dr. Adamson took an active part in the formation of the Manchester Association of Engineers; he served on the Committee for many years, and in 1922 was elected president.

He was elected to membership of the Iron and Steel Institute at the May Meeting of this year, only a few months before his death.

It is with very deep regret, and a real sense of the loss of a forceful personality to the engineering world, that we record the death, following an operation, of Dr. Daniel Adamson, head of Messrs, Joseph Adamson and Co, Hyde, on Saturday. October 11. The loss is the more marked as Dr. Adamson, though he had already contributed to his profession to a degree which would have satisfied many other men, might, from the vigour of his character, have been relied upon to continue his activities for many years beyond the age of 61 at which his labours have been so suddenly terminated. Bearing a name notable in the earlier days of engineering, Dr. Adamson was justly proud to be able to refer to the achievements of his forebears during the past century. He would point out that a great-grandfather had built the first railway station in the world, and that the first locomotive-hauled passenger train had started from the same ancestor’s house some five years before the Rocket ran in the famous trials. A great-uncle, whose name he bore, had been the pioneer of the Manchester Ship Canal. His father, Mr. Joseph Adamson, had been largely concerned with the introduction of steel plates in the boilermaking industry, and had initiated the practice of flanging boiler ends by the hydraulic press.

Born at Newton Moor on August 26, 1869, Dr. Adamson received his early education at a private school at Hyde, and then, following the family tradition, commenced, at the age of sixteen, an apprenticeship to engineering, first with Messrs. Scott and Hodgson, Guide Bridge, and then with Messrs. Joseph Adamson and Company, Hyde. This period terminated in 1899, and during it, like so many of the engineers of the day, his technical education was carried on simultaneously with his practical training, in evening classes at the Manchester Technical School and Owens College, Manchester. The year 1890, found Mr. Adamson, as he then was, foreman of the turning, fitting and pattern shops of Messrs. Joseph Adamson, and, in 1893, promotion to the post of works manager followed. In that year, too, he paid a visit to the United States to study the development of electric transmission, a venture which bore practical fruit in the following year in the production, by Messrs. Adamson, of the first electric three-motor overhead travelling crane, and later in the installation of electric cranes and other electrical equipment in the works at Hyde. A paper entitled “ Electrical Power Transmission,” giving the results of tests on these cranes, read in 1895 before the Manchester Association of Engineers, may be said to he Dr, Adamson’s first contribution of importance to technical societies. Thereafter, his connection with the Manchester Association was close and continuous, while the development of the works with which he was connected was also energetically carried on. Thus, in 1900, he was responsible for the erection of a new power station there, while 1907 saw the installation of a hydraulic 1,000-ton flanging press, with tables 14 ft. in diameter.

Meanwhile, in 1902, Mr. Joseph Adamson had taken Dr. Adamson and a younger brother into partnership, and Dr. Adamson’s connection with technical societies had increased by his becoming a member of the Institution of Mechanical Engineers in 1897. His activities were by no means confined to the study of electrical transmission, for he took up the question of high-speed tool steels after a visit to the Paris Exhibition of 1900, and served on the committee of the Manchester Association of Engineers appointed to investigate this subject. A paper on “ Wire Ropes,” read before the Institution of Mechanical Engineers in 1912, revealed also his close attention to this important matter. This was followed, in 1916, by a paper on another subject, viz., “ Spur-Gearing,” also read before the Institution, for which the author was awarded the Thomas Hawkesley Gold Medal in 1917. The Constantine Gold Medal of the Manchester Association of Engineers was awarded Dr. Adamson in 1926, for a paper on “ Electric Cranes.” In this year, also, he contributed a paper on the “ Economics of Engineering ” to the Institution of Mechanical Engineers.

By this time, his whole-hearted interest in the latter Institution had been recognised by, first, his election as a Member of Council in 1918, and secondly to the office of Vice-President, in 1924. Eive years later, in 1929, Dr. Adamson occupied the presidential chair, and his address in that capacity showed how thoroughly he had grasped the aims, advantages and importance of the Institution to mechanical engineering. Its summer meeting, during his presidency, was held in his native city, Manchester, and the record attendance and crowded functions gauged the extent of his popularity. It was at this meeting that the University of Manchester bestowed, with laudatory comment, the well-deserved honorary degree of Doctor of Science on the President. Dr. Adamson was chairman of the Wire Ropes Research Committee of the Institution, and was also a member of the Cutting Tools Research Committee. He was President of the Manchester Association of Engineers in the year 1922, and had also occupied the chair of the Manchester and District Association of the Institution of Civil Engineers, of which Institution he had been elected a full member in 1914. He became a full member of the Institution of Electrical Engineers in 1912, and belonged to the North East Coast Institution of Engineers and Shipbuilders. As late as this year he was elected a member of the Iron and Steel Institute, and attended its summer meeting at Prague. As he had just previously attended the corresponding meetings of the Institution of Mechanical Engineers and the Institution of Electrical Engineers at Bristol and Belfast, respectively, and had then shown little sign of ill-health, the news of Dr. Adamson’s death has been particularly distressing to those members who had met him on those occasions. His connection with the United States was strengthened by his membership of the American Society of Mechanical Engineers, the American Institute of Electrical Engineers, the American Welding Society, and the Association of Iron and Steel Electrical Engineers, U.S.A. Other interests which claimed his attention were the Newcomen Society, and the Literary and Philosophical Society of Manchester.

From 1920, following the death of Mr. Joseph Adamson, the business was carried on by the two sons, but in 1925, upon the dissolution of their partnership, Dr. Adamson became the sole proprietor of the firm, which still retains the name of Messrs. Joseph Adamson and Company, and devoted a good deal of attention to waste heat recovery in connection with boiler plant, though for some years before that he had been responsible for many successful installations. The work of electric crane making was, of course, carried on simultaneously with that of the older activity of the firm, boilermaking. In the latter connection, it may be said that Dr. Adamson, with a characteristic contempt for pretension, often referred to himself, in public, as a boilermaker, thereby identifying himself with a branch of engineering which has, for some reason or other, been treated with wholly undeserved neglect, but which requires a great amount of both theoretical and practical skill and knowledge. Of Dr. Adamson’s personality little need be said, as he was so well known in engineering circles, and there are many who appreciate at its true worth his outspoken sincerity and single-mindedness. Under an apparently brusque manner he bore a real kindliness, and with a somewhat dry humour and sound common sense would strip a doubtful argument of its rhetoric and illuminate the subject in an incisive way. Above all, he possessed that faculty, all too rare nowadays, of never being afraid of finding himself in a minority. His thought for the younger generation was shown in the warm interest he took in the subject of education, both inside and outside the Institution of Mechanical Engineers."