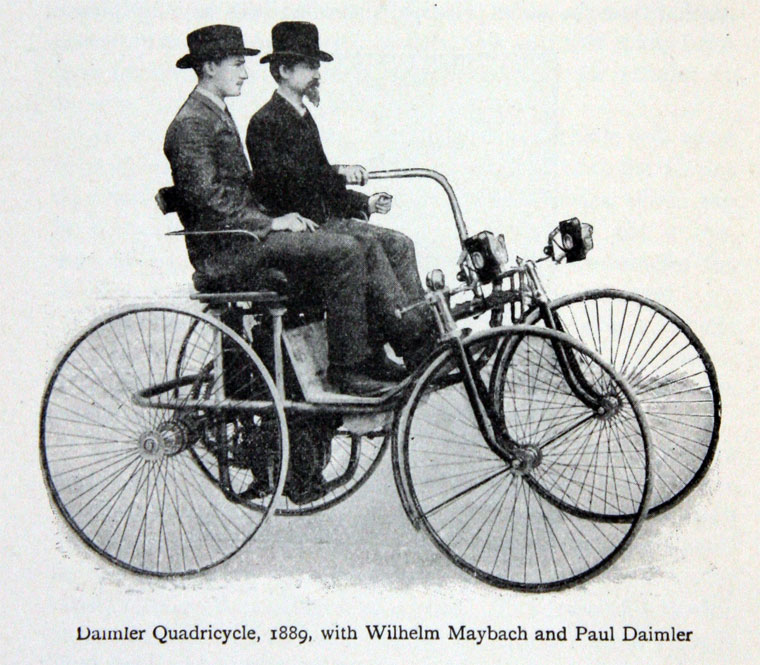 1889. The first Daimler Quadricycle with William Maybach and Paul Daimler.

Daimler-Motoren-Gesellschaft (Daimler Motor Company, DMG) was a German engine and later automobile manufacturer, in operation from 1890 until 1926.

Founded by Gottlieb Daimler and Wilhelm Maybach, it was based first in Cannstatt (today Bad Cannstatt, a city district of Stuttgart).

Daimler died in 1900, and the company moved in 1903 to Stuttgart-Untertürkheim after the original factory was destroyed by fire, and again to Berlin in 1922. Other factories were located in Marienfelde (near Berlin) and Sindelfingen (next to Stuttgart).

The company started as a petrol engine producer, but after the success of a small number of race cars built on contract by Wilhelm Maybach for Emil Jellinek, it began to produce the Mercedes model of 1902, after which automobile production expanded to become DMG main product and it built several models.

Because of the post World War One German economic crisis, DMG merged in 1926 with Benz & Cie., becoming Daimler-Benz and adopting Mercedes-Benz as its automobile trademark. A further merger occurred in 1998 with Chrysler to become DaimlerChrysler. The name was finally changed to just Daimler AG in 2007 when Chrysler was sold.

1894. Daimler Victoria and Phaeton. Illustrations in The Engineer. [1]