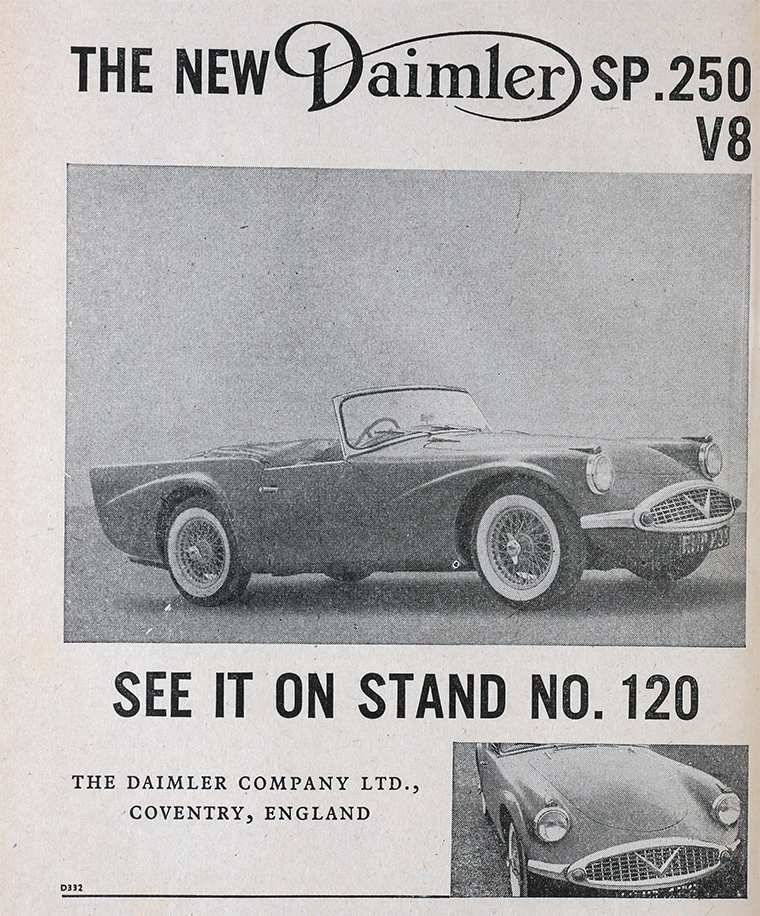 Note: This is a sub-section of Daimler: Cars

Daimler Dart was a sports car built by British manufacturer Daimler in Coventry.

It was launched at the 1959 New York Motor Show, and its greatest success was in the North American market. It had a fibreglass body, four wheel Girling disc brakes, and a 2.5 litre Hemi-head V8 engine designed by Edward Turner. The car was described as a 2+2, however the bench-like rear seat offered very limited leg room unless the front seats were pushed fully forward.

Daimler were soon forced to drop the Dart name when threatened with legal action by Chrysler’s Dodge division, the car was then renamed the Daimler SP250.

A-spec
The original A-spec version could do 120 mph (193 km/h), but the chassis, a “14-gauge ladder frame with cruciform bracing” based on the Triumph TR3, flexed so much that doors came open, marring its reputation.[3]. Bumpers (fenders) were originally an optional extra.

B-spec
Jaguar bought Daimler in 1960, and were immediately concerned about the chassis flex. They brought out the B-spec version with extra outriggers on the chassis and a strengthening hoop between the A posts. There were also other detail improvements, including an adjustable steering column.[2]

C-spec
There was a C-spec version introduced in 1963 with some additional luxuries as standard equipment.