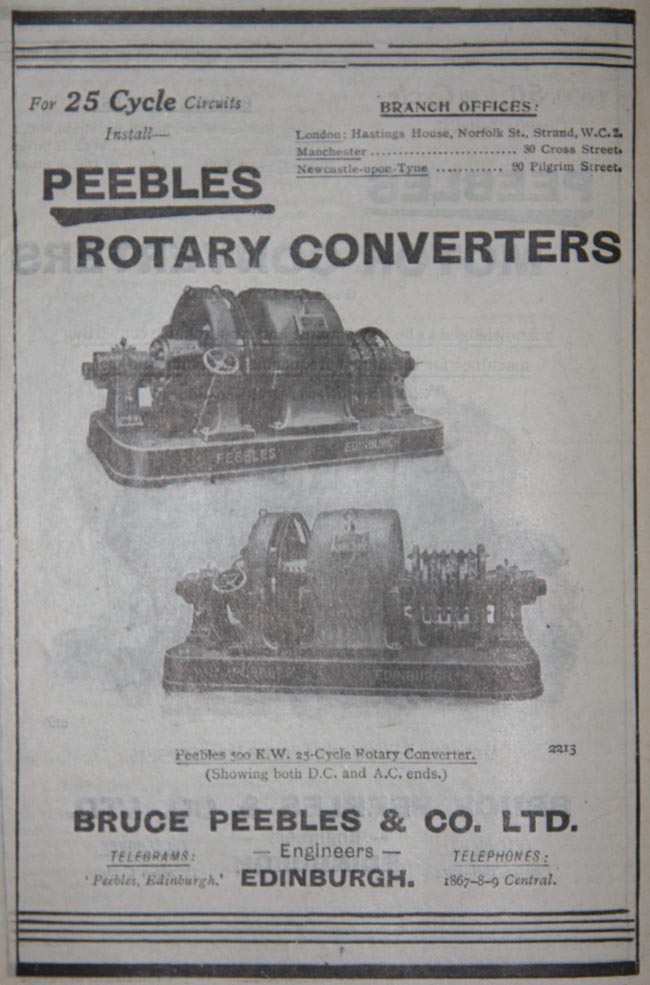 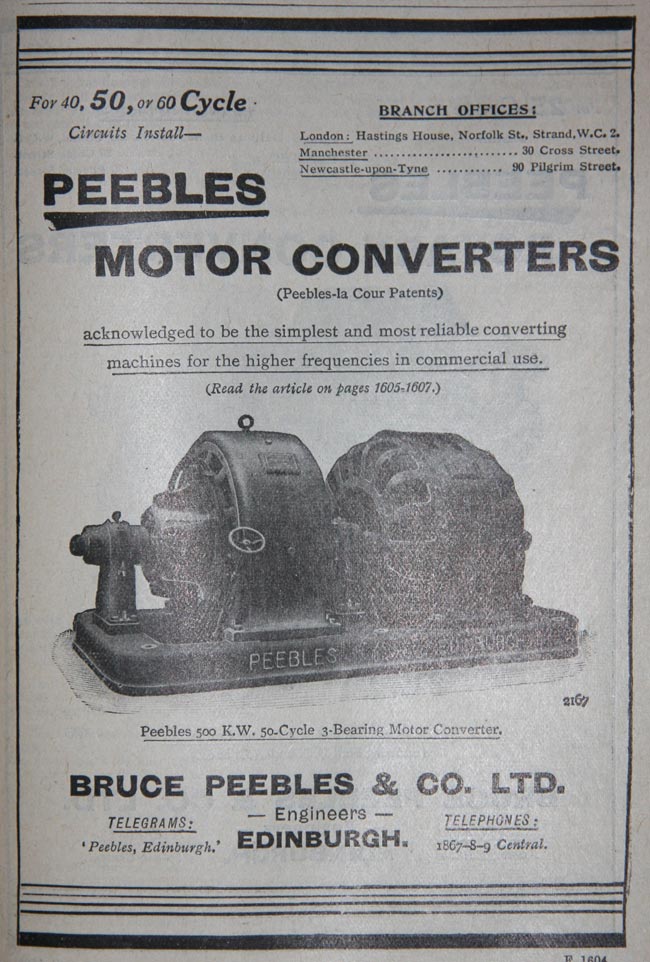 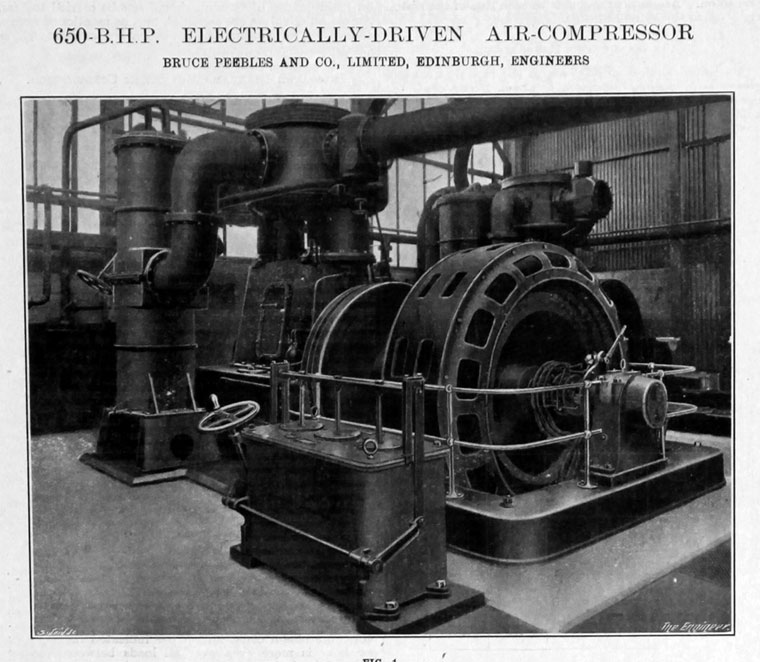 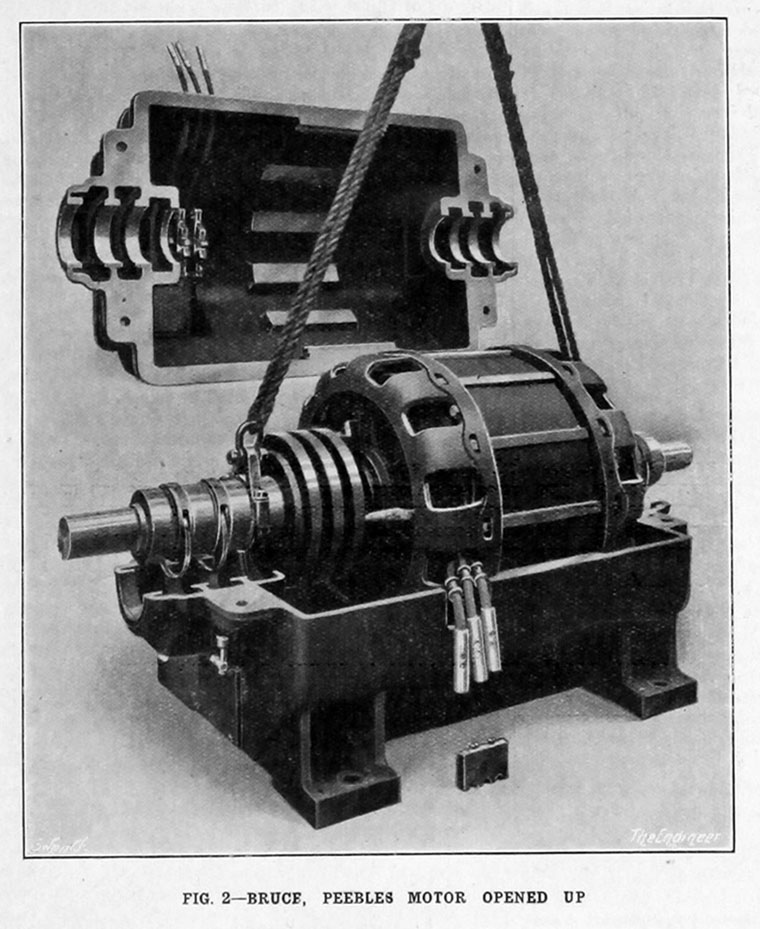 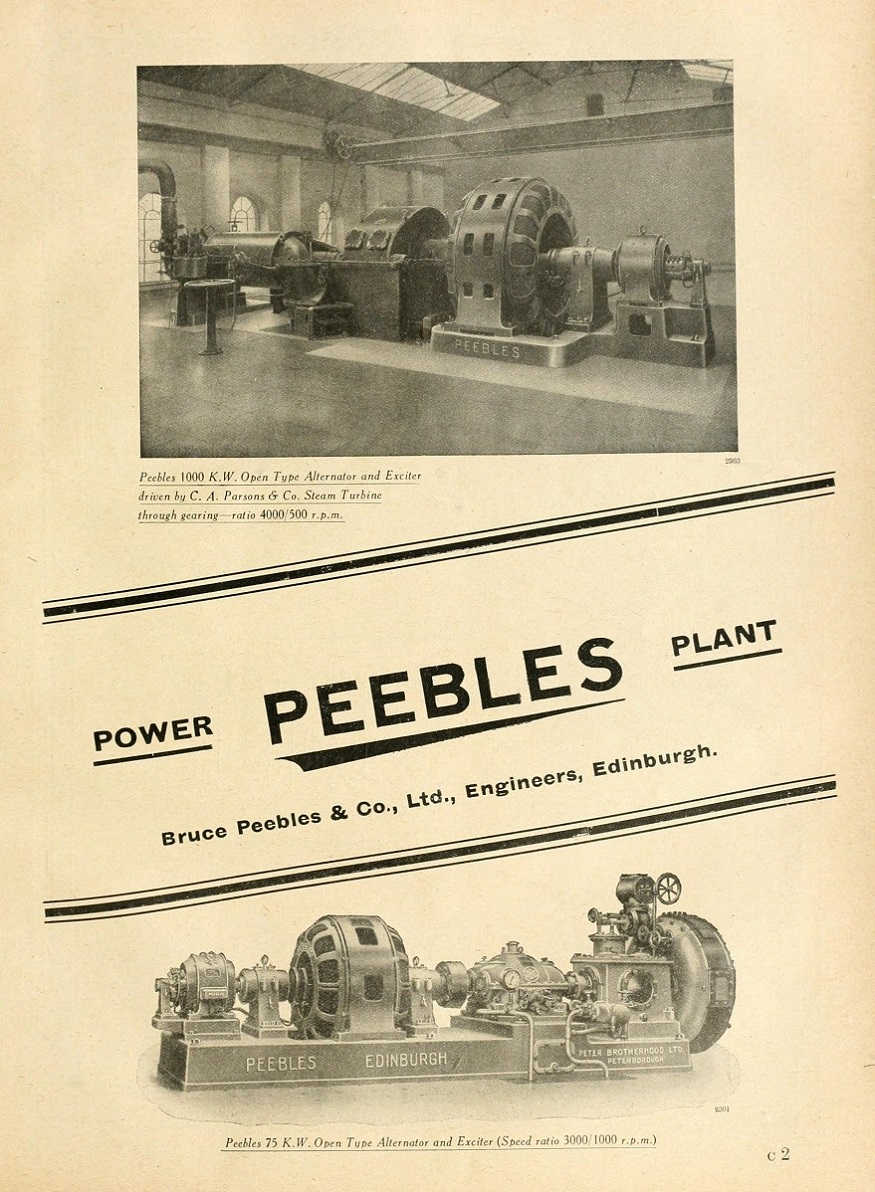 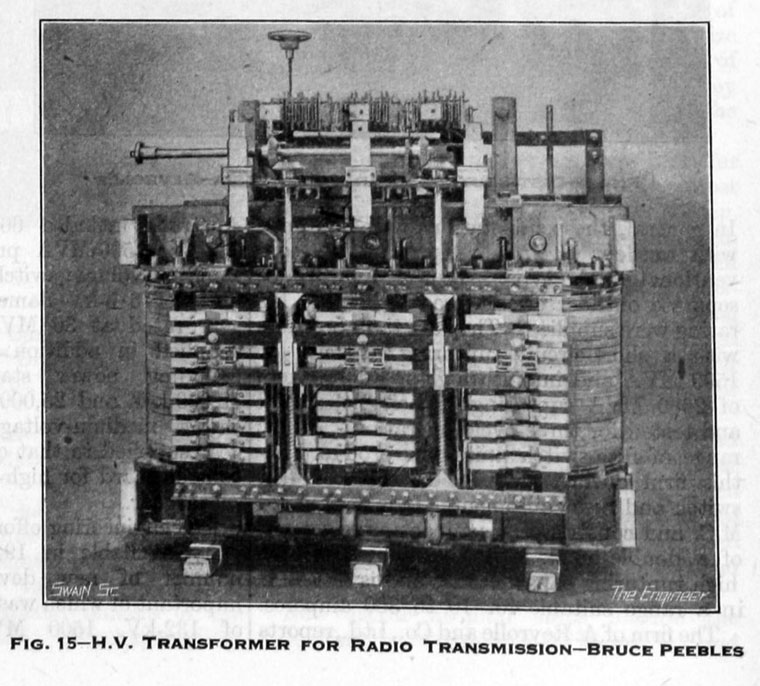 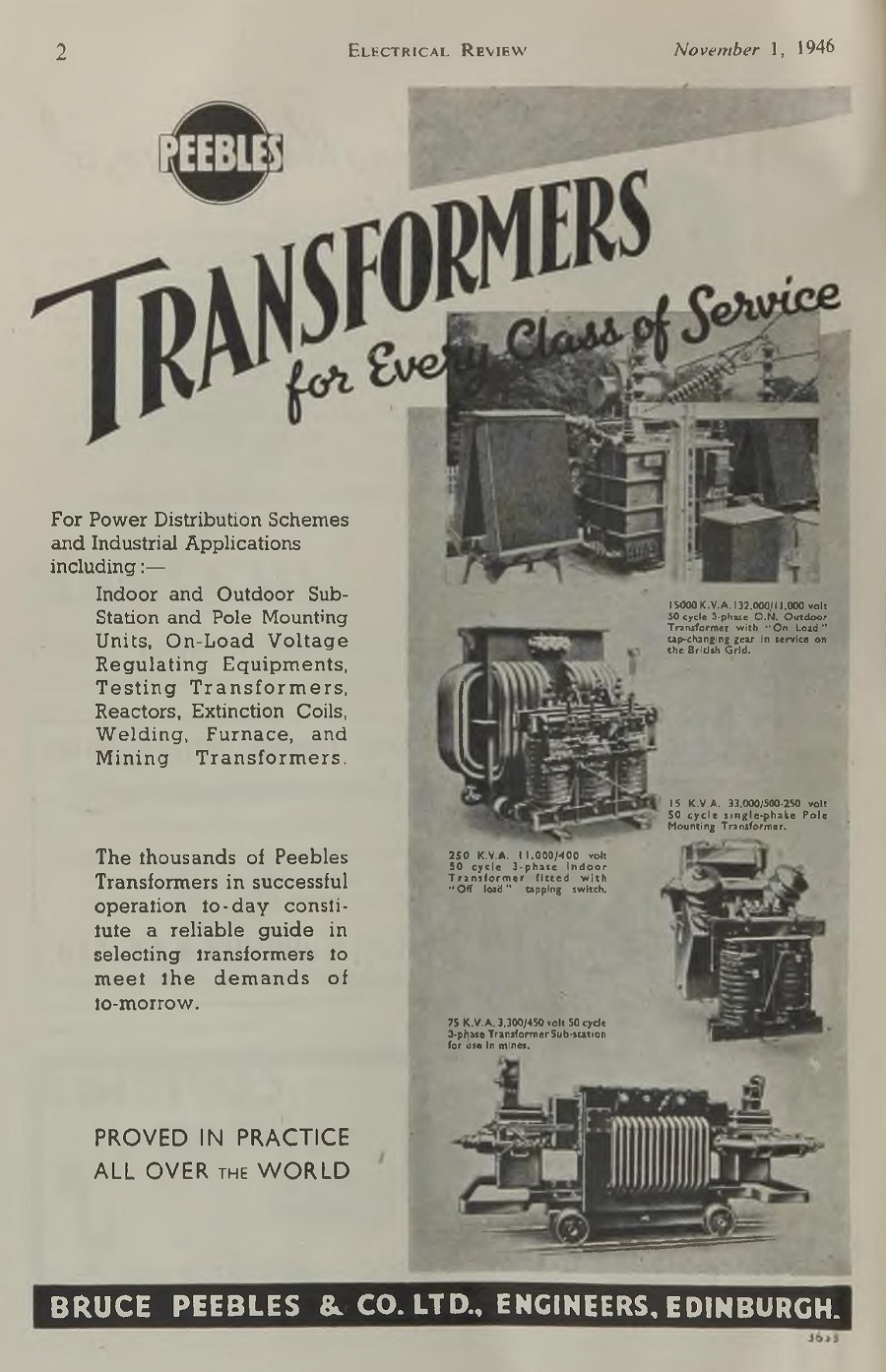 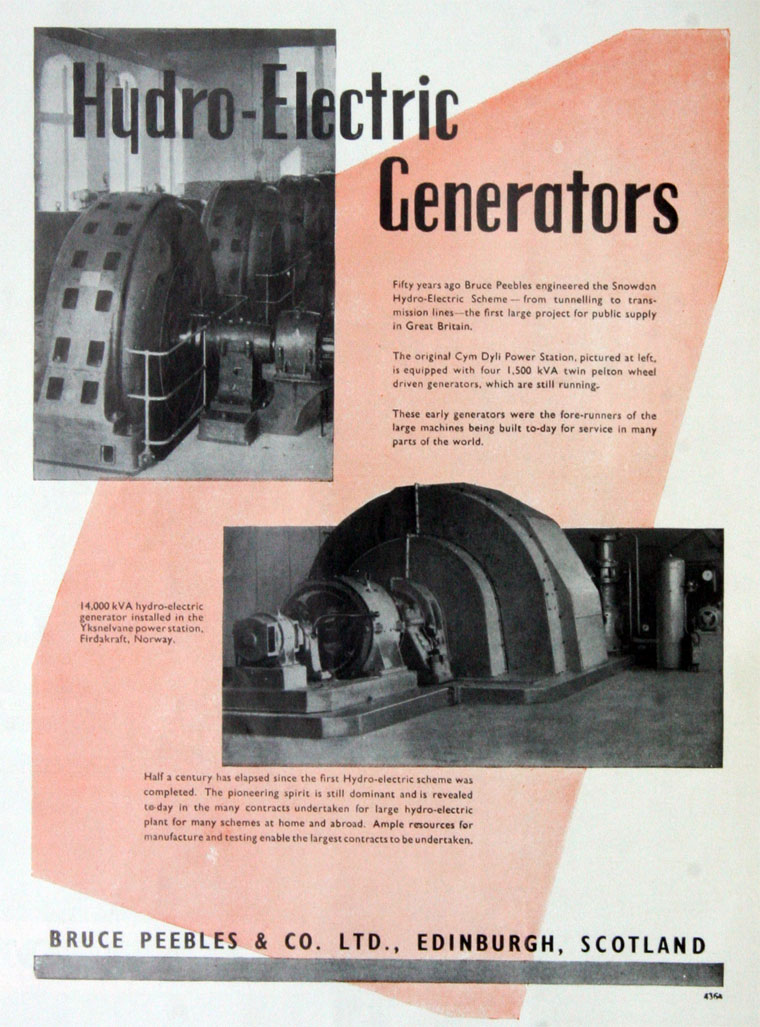 1866 The company was founded as D. Bruce Peebles and Co by Scottish engineer David Bruce Peebles (1826-1899) in Edinburgh. The company initially specialised in gas engineering, for the manufacture of gas meters and gas appliances at Fountainbridge, Edinburgh.

1876 the works were moved to Tay Works, Leith

1902 The name was changed to Bruce Peebles and Co. Ltd.

In 1904 the company opened a new factory at a site in East Pilton, on the north side of Edinburgh. This grew to become one of the largest producers of power transformers in Europe, employing 3,000 at its peak in the 1950s.

c.1906 Held a licence from Ganz of Budapest for their system of railway electrification.

By 1911 the company was concentrating on electrical plant[6]

The company held the British manufacturing rights for the Cascade converter and a licence to manufacture three phase electrical equipment designed by Ganz of Budapest.

During both world wars, the works produced shells, submarine and aircraft parts, tank and electrical equipment such as mobile searchlights and mine sweeping units.

It also manufactured at least one (from an order of ten) electric locomotives for the Portmadoc, Beddgelert and South Snowdon Railway.

1924 Appointed Sellar Inglis and Co of Glasgow, as their agents fro the West and North of Scotland.[11]

1947 It was the main sub contractor for the electrification of the Manchester - Sheffield railway line (the Woodhead route) from 1947 - 1954, a major engineering achievement. Throughout this period it specialised in large scale transformers for power stations, including the worlds largest 400kV 'quadrature booster' for the UK national grid. It also produced heavy electrical motors for various uses, including railway locomotives.

The works had its own internal railway system, which was electrified and used electric shunting locomotives built by Bruce Peebles themselves. This was the first electric line in Edinburgh (main line electrification did not reach Edinburgh until the early 1990s).

1984 Concentration of activities in Edinburgh, closing the leased plant in Birmingham and Cleveland, Ohio[15]

By the late 1990s it was owned by Rolls-Royce and the Austrian company VA Tech.