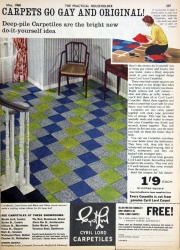 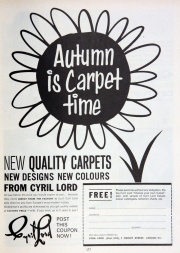 1945 Cyril Lord was established as a private limited company in Northern Ireland in June by Cyril Lord and W. H. McMillan.

By 1954, the company was described as "spinners, weavers and converters of cotton, rayon and synthetic fibres". In May, Cyril Lord Ltd became a public company with an authorised capital of £2.5 million.

Lord acquired several mills in Lancashire where all his manufacturing units were located. These acquisitions were part of a merger activity that was the dominant characteristic of British textiles in the 1950s and 1960s.

Although registered as a Northern Ireland company, Cyril Lord did not begin to develop manufacturing capacity in that region until the mid-1950s. Unlike most other UK regions after 1945, Northern Ireland had failed to achieve full employment and normally had a considerable excess of male unemployment.

1955 By the spring, Lord had decided to move into carpet manufacture and he formed a new company, Cyril Lord Carpets Ltd, to undertake the business.

Lord’s diversification into carpet manufacture was prompted by a major technological innovation – the introduction into the UK of "tufted" carpets from spun yarn (which originated in the USA) rather than manufacture by traditional weaving techniques. It revolutionised carpet manufacture and opened up the prospect of a mass market not for lower income households.

After difficult negotiations, Lord took advantage of improvements in government financial assistance and, after promising to do his best to employ 200 mainly male workers, was provided with a new factory in Donaghadee, County Down, Northern Ireland.

1957 The factory opened - it had the advantage of being both new and purpose-built. This distinguished it from most UK textile mills which were old and often ill-suited to technical innovation and organisational change. Built and equipped to Lord’s specifications, the new factory formed the basis of his carpet business over the next ten years, during which period it was, for a time, the largest of its kind in Europe and the fourth largest in the world.

The factory was extended three times between 1960 and 1966, each time with Government support, and the Ministry of Commerce also provided further assistance to Lord to enable him to operate factories at Carnmoney from 1959 and Rathgael from 1966. In addition, the Ministry provided substantial capital grants towards new plant, machinery and equipment. Eventually the assistance he received totalled some £7 million.

The industry had become increasingly cartelised from the end of WWII, with two agreements, operated by the British Carpet Manufacturers and the Wholesale Floor Covering Distributors’ Association respectively, to regulate production, distribution and sales.

1958/59 The agreements were legally challenged and the court dismissed the industry’s arguments that quality and exports would decline, distribution would suffer, joint advertising would stop and promotional costs increase.

1959 Lord had suffered net losses in three of the years since 1956. There were two particular weaknesses in Lord’s expanding business operations that would damage the company’s reputation: a lack of market research and inadequate testing of new products, both of which derived from Lord’s insatiable desire to expand and innovate.

1965 In March, Lord decided to offer equity to the public but there were financial problems.

1968 Cyril Lord stepped down due to health problems. As late as April 1968, the strengthened management, together with a pre-budget consumer boom and the impact of devaluation were all seen as making the prospects of recovery good. The lack of financial control within the group had allowed costs to rise to critically high levels. It was too late to pull the company around, and the scale of the crisis at Cyril Lord became clear over the next five months.

As its difficulties increased the Cyril Lord group belatedly sought professional advice and approached Rothschilds to act as their merchant bankers and advisers, but Rothschilds declined the business. Hill Samuel did accept but only on condition that Cyril Lord himself played no further part in the group’s activities.

Lord’s two principal raw material suppliers in the region were Courtaulds and British Enkalon, who also supplied carpet manufacturers in Britain. Despite their status as competitors, both firms were initially receptive to the idea of joint intervention to keep their major customer in business.

1968 Despite the prospect of numerous rescue bids, each of which failed, by late November, there was not even enough money to maintain a share list so trading ceased and the company disappeared from the Stock Exchange List, on which it had been quoted since 1954. The company was put into receivership.

The impact of Lord’s factories in Northern Ireland had been enormous, especially given that they were established in small towns - most of the male workforce now faced the prospect of unemployment.

After weeks of uncertainty, Lord’s three factories in Northern Ireland and his Lancashire mills were bought by Viyella International. Viyella did not, however, buy either the shops or the direct selling operation. The carpet company was renamed Donaghadee Carpets[2]

Surplus stock was acquired by Allied Carpet Stores, giving that new entreprise an edge on its competitors in London[3]

1979 The owners, Carrington Viyella, put in a company doctor, Bob Brown. Considerable reorganization was undertaken and, in 1980, the company's plants were amongst the few in the industry working full time. Held off the cuts proposed by the parent's management consultants. Installation of a BDA printer at Blackburn enabled the company to respond quickly to changes trends and allowed low stock levels to be maintained.