Grace's Guide is the leading source of historical information on industry and manufacturing in Britain. This web publication contains 148,380 pages of information and 233,851 images on early companies, their products and the people who designed and built them. 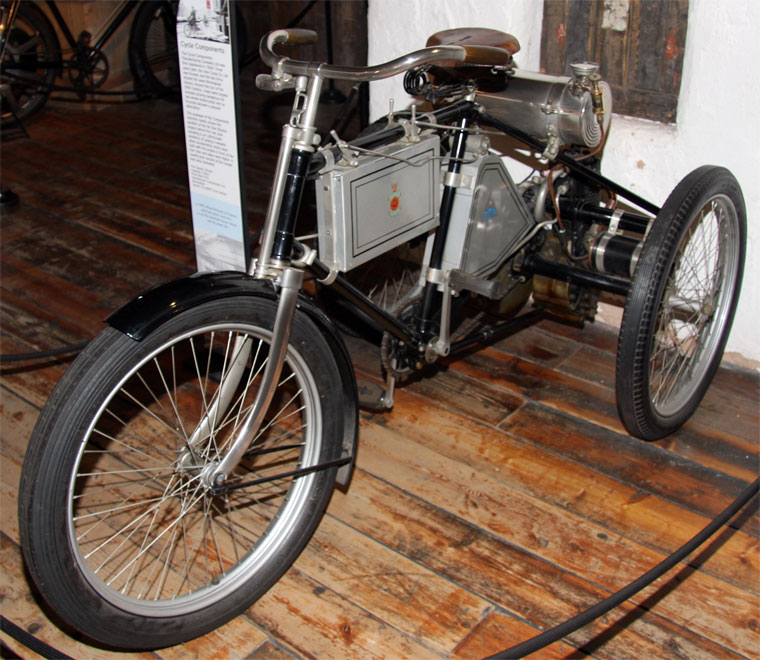 1899. Exhibit at the National Motor Museum.

1894 The Cycle Components Manufacturing Co was formed by Harvey du Cros (of South Hill, Co. Dublin) to make fittings for the cycle trade. Other directors were R. F. Hall, Frederick Warwick, Walter Evans and Arthur Du Cros of Coventry. The company was to acquire and carry on the businesses of[2]:

1894 Acquired the Simplex Manufacturing Co which was subsequently liquidated[3].

1895 The tube manufacturing part of the business (based on Hudson and Co) was making substantial profits[4].

1896 Sold the Westwood Rim patents and the machinery for their manufacture to Dunlop Pneumatic Tyre Co[5] in order to raise capital for the business[6].

1896 September 16th: Charles Sangster became a director of the company[7] and subsequently managing director[8]. At this time he saw the need to separate the tubes business as this conflicted with making and supplying components to the cycle trade.

1897 Acquired the Ariel Cycle Co. For a summary of the various users of the Ariel name see Ariel - an overview.

While the Components company continued to supply ready to build fittings for the trade, a kindred concern was started in a section of the factory to manufacture Ariel cycles, under the direction of Charles Sangster. These cycles were ridden to victory in the world's championships of 1897 by J. W. Stocks (professional) and E. Gould (amateur) and paced by Ariel multi cycles, Sangster's new marque quickly achieved commercial success, the agency being much sought after by retailers throughout the country and abroad.

1898 J. W. Stocks, after his retirement, wrote "Stocks on Training" which was published by the makers of his bicycles, Ariel Cycle Co[11].

1898 At the delayed AGM at the end of the year, it was reported that depressed demand for cycles had reduced profits substantially. The directors were now giving their attention to motor vehicles. The chairman ( Harvey du Cros senior) proposed to transfer to the company a licence for a half-right in the De Dion "motor", for which the company had received large orders[12].

1898 Built the company’s first motorised tricycle. It had a De Dion engine made under licence. After that year only the Ariel marque name was used. More tricycles were produced.

1899 Ariel Cycle Co replaced the Yerburgh Bowl belonging to the Cheshire Cycling Club, which was lost from the company's stand at the Agricultural Hall exhibition[13].

1899 J. W. Stocks, of the Ariel Cycle Works, Birmingham, was fined for speeding on a motor tricycle on the Great North Road[15].

1900 The Cycle Components Manufacturing Co of Birmingham issued a catalogue of parts.

1901 Quadricycles were added to the product line in 1901 as the Ariel brand was extended to car production. The retailing of Ariel motorcars was handled by Ariel Motors Ltd of Long Acre, London.

1902 The name was changed to Components Ltd