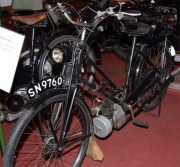 Cyc-Auto were motorcycles produced from 1934 to 1958. From 1938 they were owned by the Scott Motor Cycle Co. They were the first British autocycles to be produced.

The original design came from Wallington Butt in the early 1930s.

1934 The marque first appeared, with the firm based a Park Royal, London. The machine was fitted with a 98cc two-stroke engine with vertical cylinder and the crankshaft running along the axis of the machine. The magneto went on the crankcase front and the drive came back to a worm and wheel built into the bottom bracket of the bicycle frame with chain drive to the rear wheel. Lubrication was by petroil.

1935-1936 Different versions of that model were offered and the main engine components were set in-line.

1938 Butt sold the firm to Scott who built the engines at their Yorkshire works, while assembly moved to East Acton in London. The original Cyc-Auto was taken over by Scott. The design continued with a 98cc two-stroke engine with a crankshaft set along the machine axix to drive back to a worm and wheel, with a chain-driven rear wheel.

1953 A motorcycle carrying the Scott name and using the same engine, two-speed gearbox and shaft drive was shown at Earls Court. It had a loop frame, telescopic forks and plunger suspension, but nothing came of it.

1958 Having continued for several years, the line then came to a halt.

Scott Cyc-Auto was a motorcycle produced from 1938 to 1958. The engines were built in Yorkshire and the machines assembled in London.

1953 Manufacture had passed to Winsmith of Finchley, London. At the Earls Court show they exhibited a prototype motorcycle that used the existing engine with a two-speed gearbox and shaft final drive. The loop frame had telescopic forks and plunger rear-suspension. Nothing further came of this design.

1958 The Scott Cyc-Auto ran on until that year.