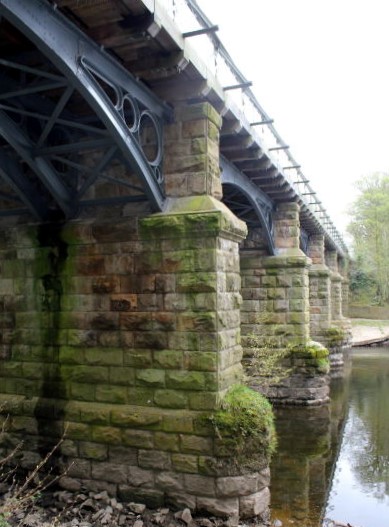 The spandrel components are each made from two pieces of angle iron, riveted together....

.... or made from one piece of T-section iron

across the River Lune at Caton, near Lancaster

There are two former railway bridges (west and east), recently restored for use by walkers and cyclists.

There is also a handsome masonry viaduct carrying Low Road over the River Lune.

The North Western Railway opened a line in 1849 from Lancaster to Wennington. Between Halton and Caton, the line had to cross a crook-shaped loop in the River Lune by two viaducts.

Wrought iron arches spring from sandstone-faced piers. There are six arches on the west viaduct and five on the east, supporting wooden decks.

An 1849 article on the opening of the railway refers to the viaducts having timber arches.[1]. There is some evidence to suggest that these were replaced in iron in 1867.

A car park and café are located close to the viaducts.