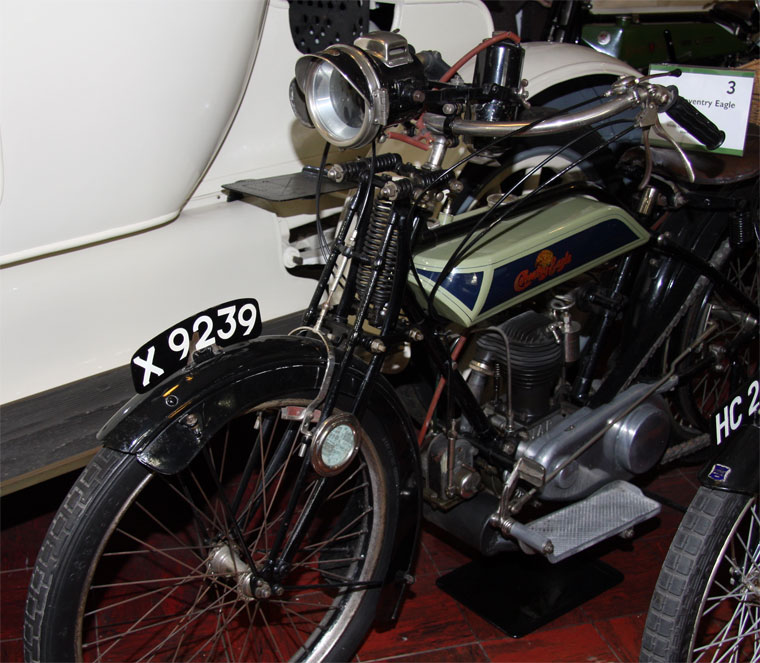 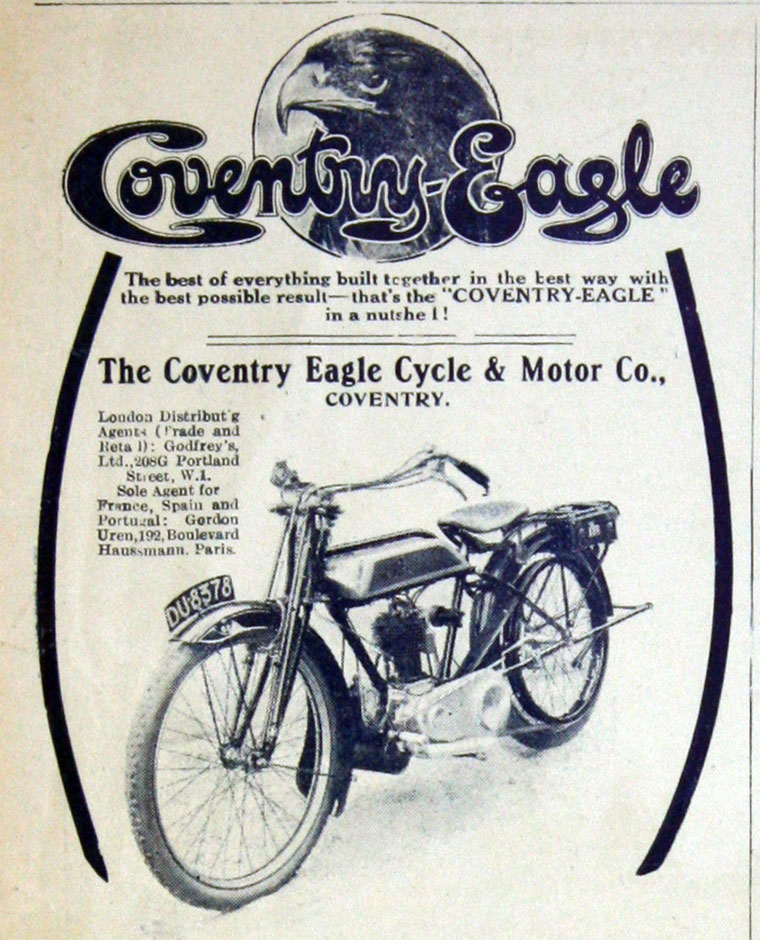 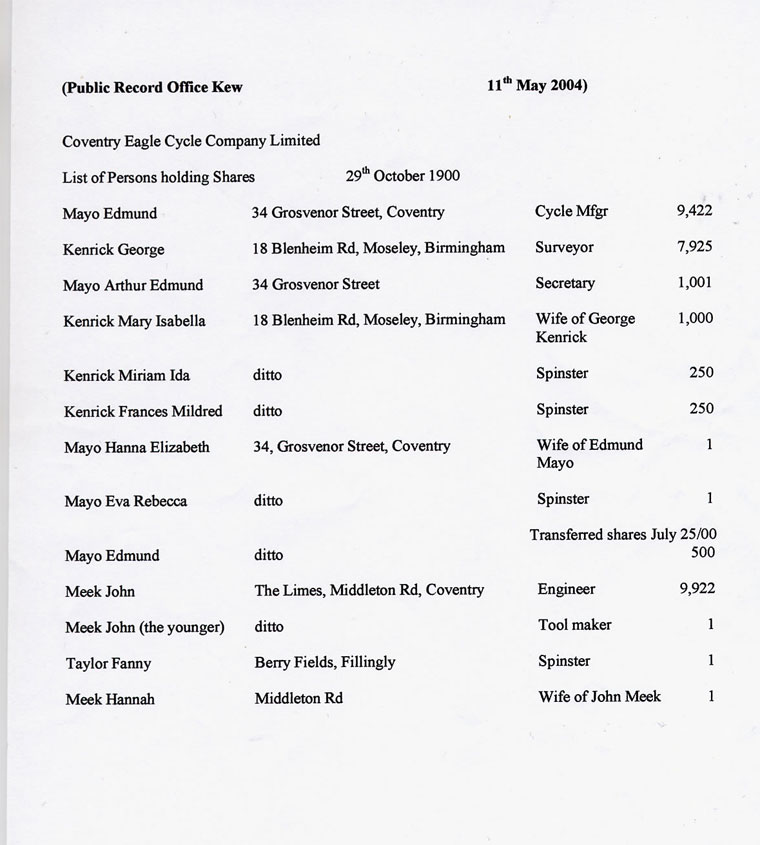 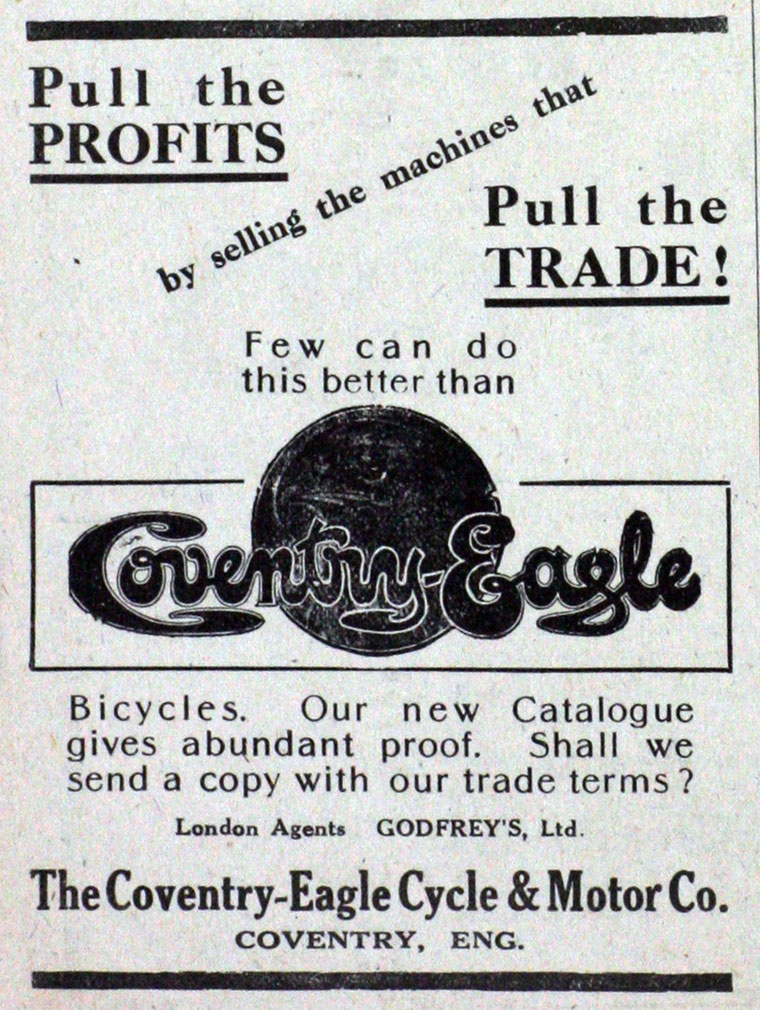 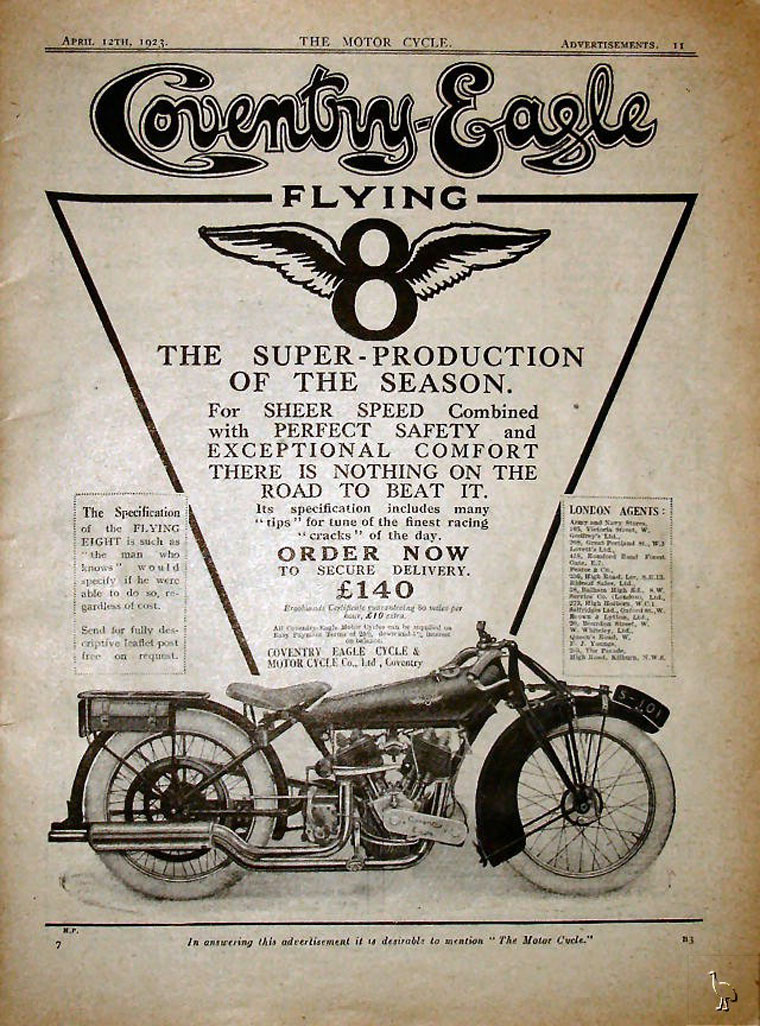 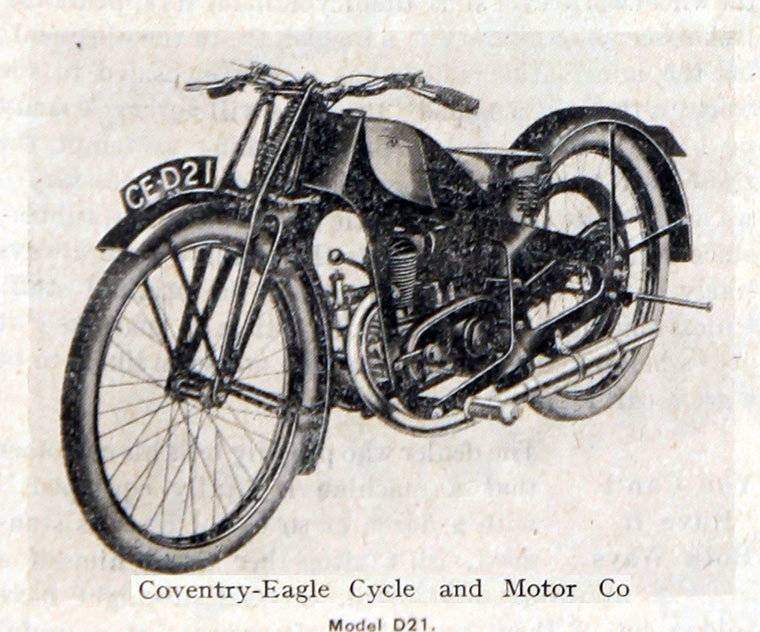 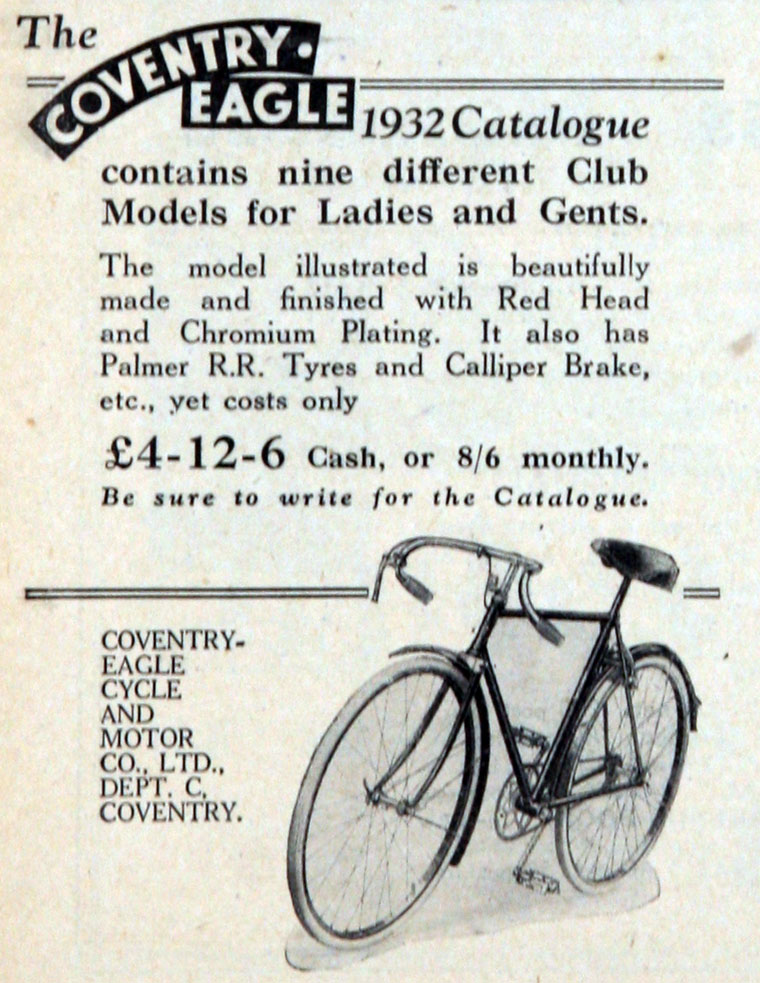 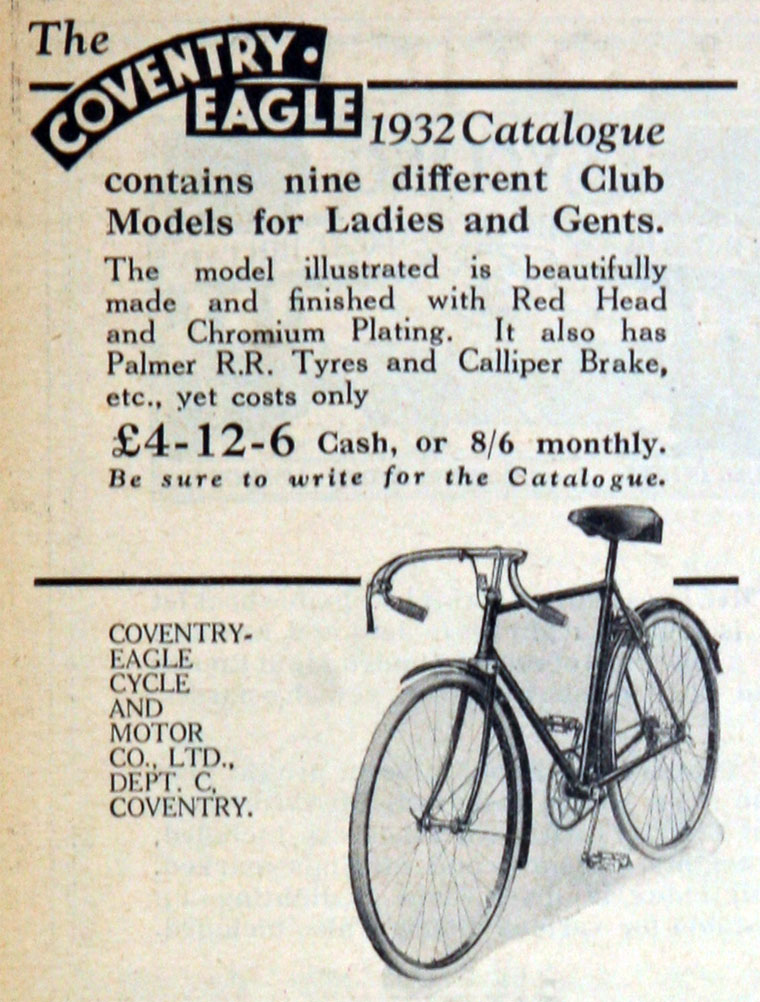 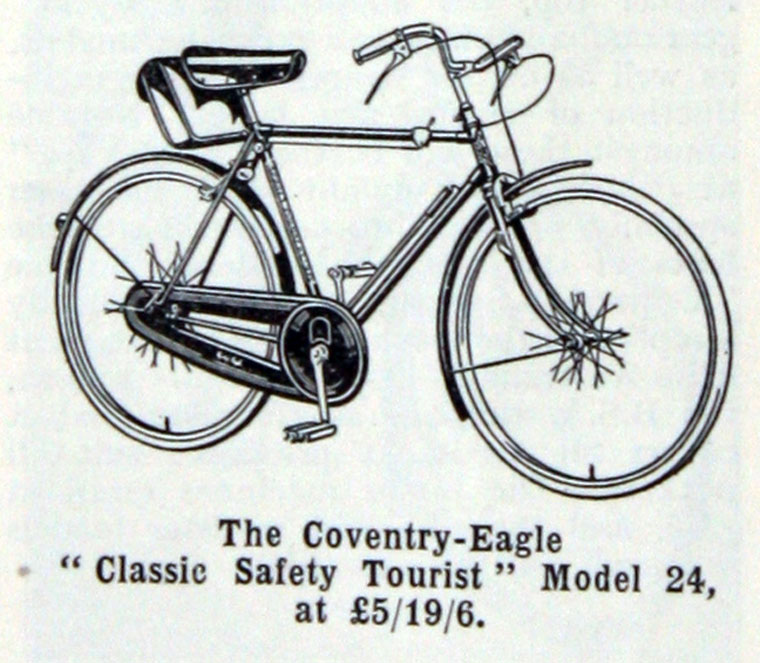 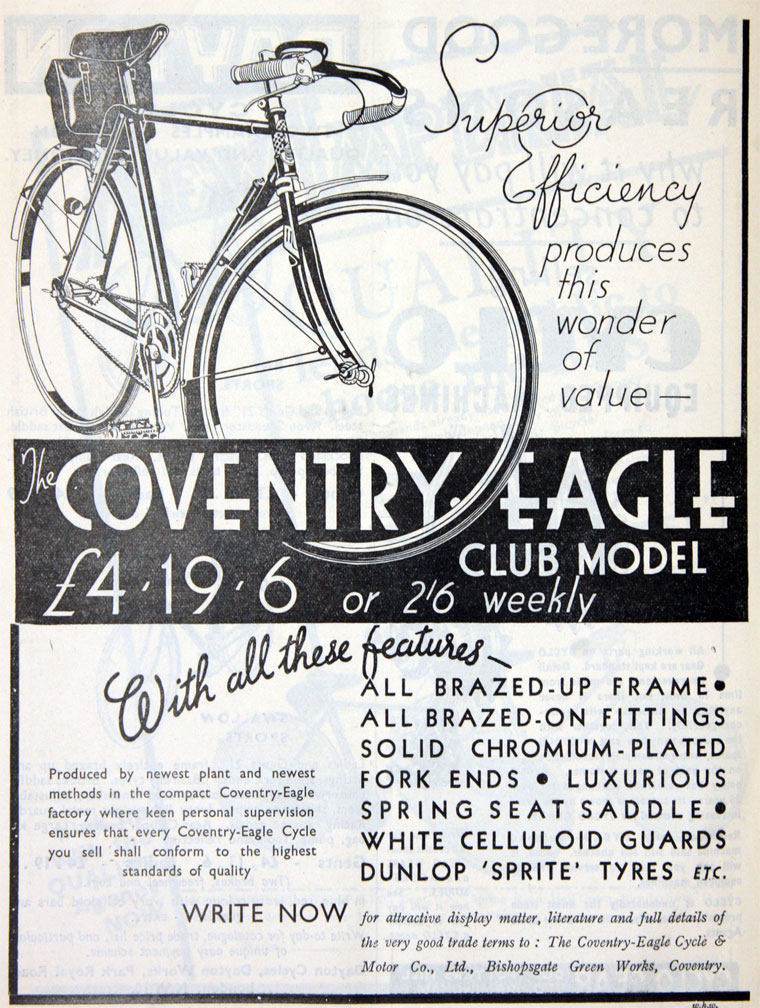 Model B33. 300cc. Exhibit at the National Motor Museum.

Tandem cycle with sidecar. Exhibit at the Dover Transport Museum. 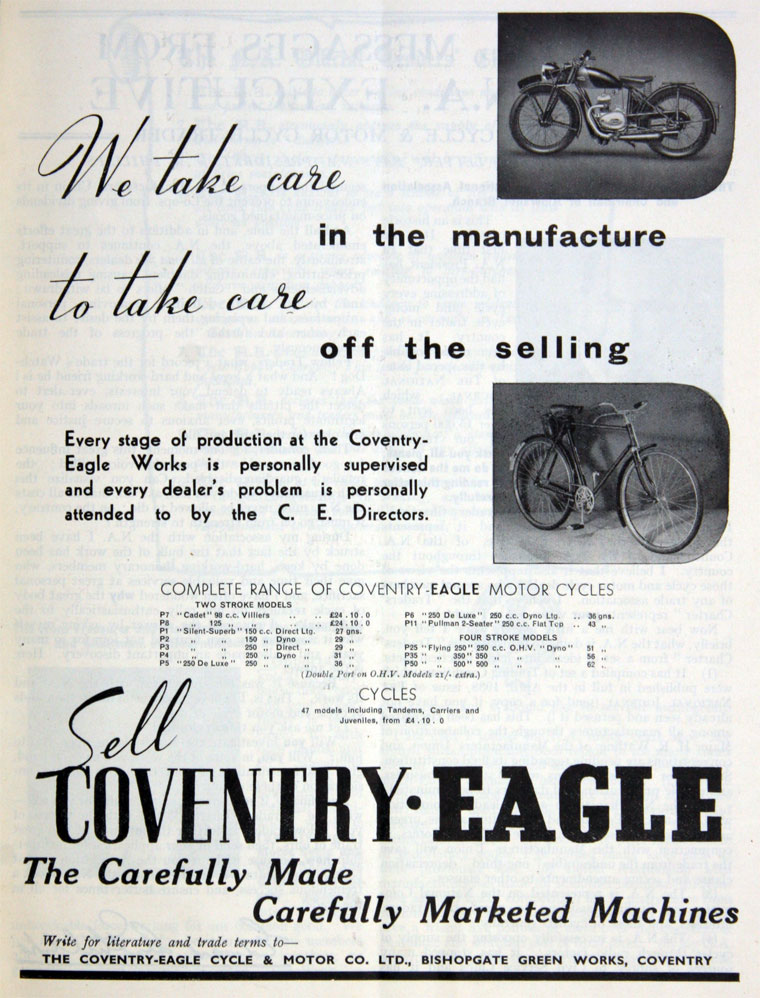 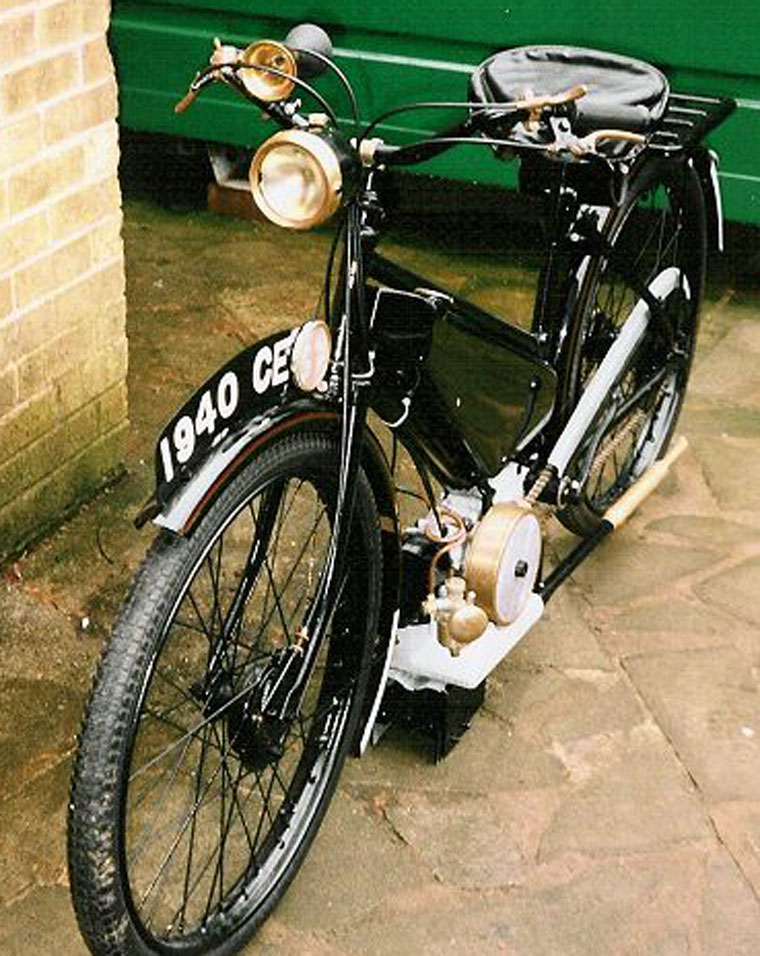 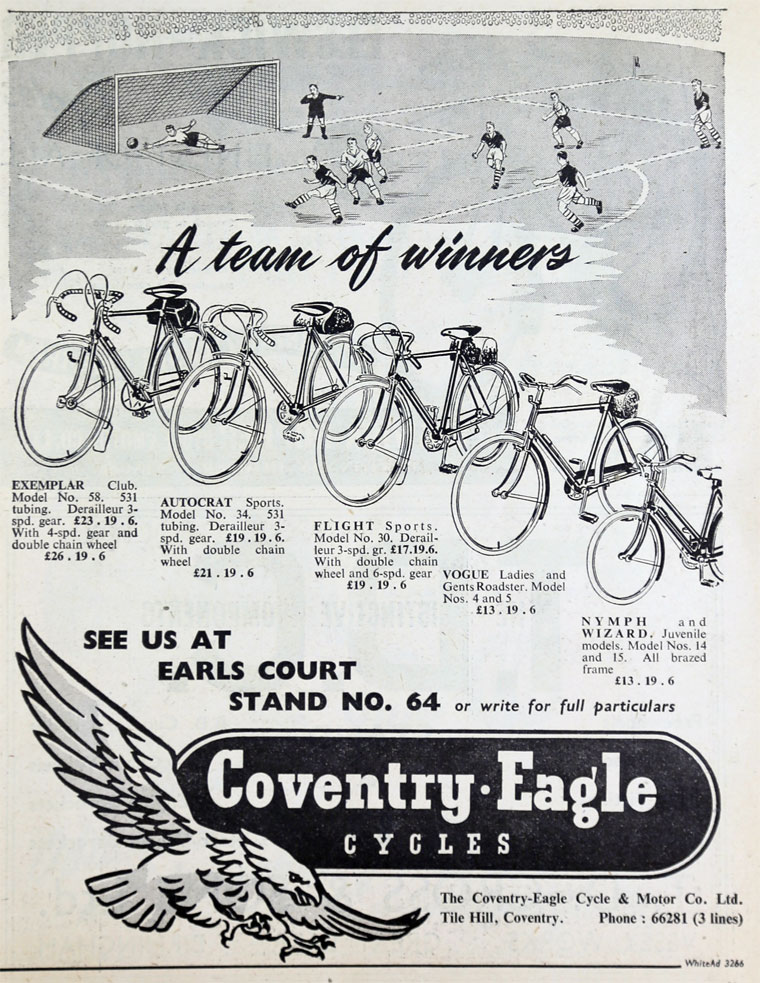 Coventry Eagle of Foleshill Road, Coventry. The company produced motorcycles between 1899 and 1940.

1897 Formerly known as Hotchkiss, Mayo and Meek at Hill Cross Works, Coventry; when Hotchkiss died and John Meek left the company, it came under the control of Edmund Mayo and Bernard Rotherham and moved to Lincoln Street, named as the Coventry Eagle Cycle Co.

Production began with the building of bicycles and then tricycles assembled from bought-in parts. These cycles were well-built and popular, which accounted for the continued success of the firm.

1898 The earliest motorcycle range had included a model with an MMC engine hung from the down-tube and by this time it had increased to a range of singles in loop frames, with sprung forks and belt final-drive. In an attempt to add a passenger, the solo could tow a trailer. There was also a forecar and later a sidecar. During this period they also produced machines under the Royal Eagle name.

1901 The original company was liquidated and reformed as the New Coventry Eagle Co.

1901-10 Royal Eagle were motorcycles produced in Coventry by the Coventry Eagle Co during the Edwardian period.

1903 Bernard Rotherham emigrates to the USA.

1912 Listed in Spennell's directory of Coventry as Cycle Manufacturers. [2]

1914 The range now included three models. The smallest was lightweight and powered by a 269cc Villiers engine driving a two-speed gearbox by chain and belt final-drive and with Druid forks. It was also available as a single-speed machine The other two models used Abingdon engines as a 3.5hp single and a 5hp to 6hp V-twin, with tree speeds and belt final-drive.

Post-World War I. Only singles were produced.

Sometime they moved to 201 Foleshill Road - also see Coventry Ensign Cycle and Motor Co which was also at this address.

1921 The company returned to V-twins for this year only. There were two sidecar models that had either a 500cc single or a 680cc V-twin JAP engine.

1922 The company produced only singles, once again, using engines from Villiers, JAP and King Dick.

1923 The JAP V-twin returned, together with the appearance of the famous sporting twin Flying Eight. In various forms, this sporting twin would become one of the best remembered motorcycles. There was also a 147cc two-stroke of their own design.

1924 The two-stroke engine was enlarged to 170cc and the Flying Eight was available with sv or ohv JAP engines. With the latter and a Jardine gearbox, it became the second most expensive machine on the market.

1925 The two-stroke engine was enlarged again - to an Aza 175cc, with an Albion two-speed gearbox.

Two-strokes were then dropped altogether for a couple of seasons as the company concentrated on a wide range of four-strokes in single, twin forms and even with sidecar outfits.

1928 The policy of four-stroke only came to an end with the arrival of twin-port, super-sport Villiers engines in 147cc, 172cc and 172cc twin-port, super-sports forms appeared in a set of pressed steel cycle parts. The company also began to use forks from pressed sheet steel. Although this was common in Europe, Coventry Eagle were the first major British company to use this method - a move that proved to be very successful for the following decade.

1929 There were minor frame changes and the arrival of 196cc Villiers and 197c JAP engines brought the range to five models. The Flying Eights continued to progress and a similar name style was used on models with 344cc and 490cc two-port ohv JAP engines, known as the Flying 350 and the Flying 500. Both had a new cradle frame and tubular Webb girder forks.

1930 Most of the range continued and new models were added using dry-sump Sturmey-Archer inclined engines of 348cc and 495cc in conventional tubular frames.

1931 Twins were dropped and only the production of two-strokes continued for some years. Many of the models were stylish and distinctive with large exhaust systems, as on the Silent Superb. The most basic was the 98cc Marvel. Other model names were Wonder and Eclipse, most in a pressed steel frame.

JAP-powered four-strokes returned for a season or two.

1935 The next sensation was the Pullman, with a new type of pressed-steel frame with enclosure of the mechanics and rear wheel. The rear suspension was controlled by leaf springs running along the frame sides.

1937 The four-stroke singles returned, using Matchless engines in three sizes. These, plus a variety of two-strokes, from an autocycle to the Pullman, ran on to the end of the decade.

1940 Production of motorcycles, drastically cut because of the war, soon ceased and never resumed.

WWII Factory used for manufacturing machine guns, partly due to the fact that one of the Hotchkiss family was a co-founder of the company as Hotchkiss, Mayo and Meek.

1959 Moved from Coventry to the Grove Lane Works in Wills Street, Birmingham and remained in business in the town until 1968.

They continued to sell cycles until 1968 under the management of George Kenwrick and A. Douglas Mayo.

1968 Unable to expand at Smethwick but with increasing export demand, Coventry Eagle relocated to part of Elswick-Hopper's aerodrome buildings at Barton upon Humber. The companies were not merging, it was said[4].

On the retirement of owner Douglas Mayo, Elswick took over Coventry Eagle and began to trade as Falcon Cycles.

1978 The acquisition by Falcon of the old Corah factory in Brigg had involved a large investment in new equipment; Ernie Clements, who had established Falcon, decided to sell to Elswick-Hopper, thereby joining the board of directors. He did not fit well into the corporate culture and parted company with them in 1982, taking a new factory in Newtown, Powys, and the Coventry Eagle name as part payment for his shares.