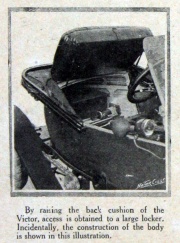 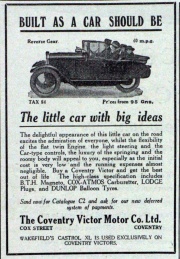 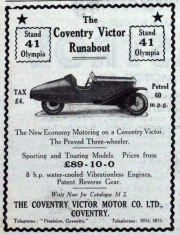 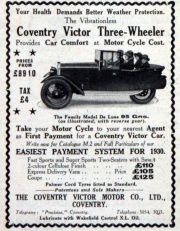 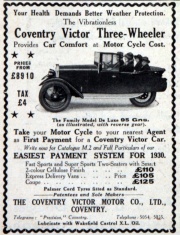 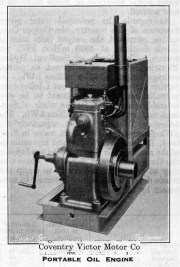 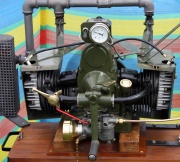 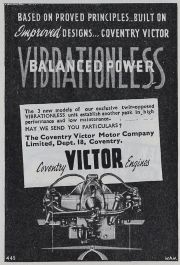 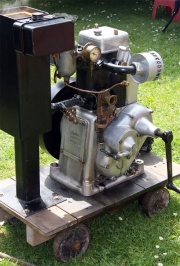 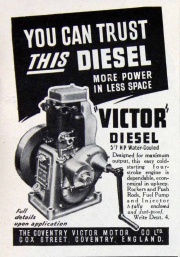 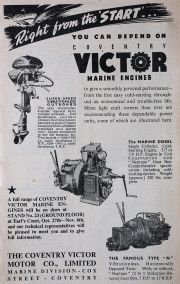 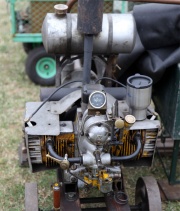 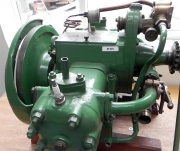 Type N marine engine. Exhibit at the Museum of Power.

1904 Morton and Weaver was a proprietary engine manufacturer in Hillfields, Coventry, founded in 1904

1906 The company started manufacturing horizontally opposed engines in 1904, and in 1906 one powered the first monoplane, the Weaver Ornithoplane, to fly in Britain. It was designed by W. A. Weaver, one of the partners in the company. Later they supplied engines to many motorcycle and cyclecar makers, especially Grahame-White.

1919 'Recently we were able to take a trial run in a little four-wheeler fitted with the first of a new water-cooled engine produced by the Coventry Victor Motor Co., Ltd., who are making a 5-7 h.p. air cooled opposed twin for motor cycles.

'The little car itself is extremely interesting if only for the system of construction, which is reminiscent of the canvas canoe, but, instead of canvas, aeroplane fabric is stretched over a light lathwork of wood. This construction is not obvious, however, and at first sight the body appears to be built of wood. At the rear of the body there is a capacious locker, access to which is obtained by raising the back rest.

'Little can be said at the present time regarding the vehicle as a commercial proposition, but we understand that in all probability a company will be formed to market it. That it is more than the average experimental chassis put together to test an engine or transmission becomes evident when the car is examined. The main object of our rim in the car was to test the engine; and we can say that for a first engine of the batch about to be produced, it struck us as being remarkably quiet and flexible. The capacity is only 750 c.c., the bore and stroke being 80 and 78 mm. respectively, and since the car weighs about 8 cwt., gear changing was naturally somewhat frequent; but on the whole the vehicle had a good turn of speed, and whether in low gear or top, engine vibration was unnoticeable.

'The transmission is the subject of a pending patent, and therefore cannot be described. We think, however, that the designers will be well advised to install larger countershaft pulleys.' [1]

Between 1919 and 1930 Coventry-Victor, using their 688cc flat twin engine, started making motorcycle and sidecar combinations many of which were used as commercial outfits.

1919 The engine first became available and was sold to assemblers including Ayres-Layland, Bulldog, McKechnie and Regent. Throughout its existence the firm produced horizontally opposed twin-cylinder engines.

Between 1919 and 1930 Coventry-Victor, using their 688 cc flat twin engine, started making motor cycle and sidecar combinations many of which were used as commercial outfits.

1921 The company built its first model with a 689cc sv flat-twin engine produced by Morton and Weaver who were closely associated with Coventry-Victor. The model was rated as 5/7hp, with the engine in-line with the frame. It had a three-speed Sturmey-Archer gearbox mounted low down beneath the rear cylinder, all-chain drive and Brampton Biflex forks. It was available in standard or sporting form, and a modified sports model performed well in the Brooklands 500 mile Race that year.

1922 A replica of the Brooklands machine went into production as the Super Six. It was an eye-catching beast with high-level exhaust pipes on the left side and a bulbous-nosed saddle tank.

1923 The Super Six was produced as a true racing model in various forms.

1926 to 1927 The Super Six continued and there was a three-wheel runabout powered by the side-valve twin in either its existing 689cc capacity, or over-bored to 749cc . A supercharged version of the 486cc was listed with a sports 689cc sv model guaranteed to reach 80mph/128kmh.

By 1926, the company found a new scope of activity: they launched their own design two seater, three-wheeler car with the single wheel at the rear. There were four versions, the Standard, the Sports, the De-luxe and the Parcelcar with prices starting at £75. It used their own horizontal twin-cylinder engines of 688cc at first, later enlarged to 749cc, 850cc and finally 998cc. Drive was to the rear wheel via a two-speed gearbox and chain drive. Early cars had a single brake.

1928 The motorcycle involvement was scaled down. The 486cc ohv was named Super-Sports, and the 689cc sv was available in standard or Silent-Six forms.

1929 The company unexpectedly unveiled the Dirt Track ohv model, which was produced until 1932. The three-wheelers were advertised for that year's Olympia show to '...provide car comfort at motorcycle cost'.

1932 There was an updating, with styling by C. F. Beauvais and called the Luxury Sports with three-speed gearbox and costing from £110. The previous models remained available.

1933 Unchanged vintage looks resulted in the machines looking very out-dated, so the Dirt Track was dropped.

1935 The 486cc road motorcycles went out of production soon to be followed by the 689cc sv twin and by the end of the year manufacturing had ceased completely.

After World War II, a prototype codenamed Venus was made with flat four 747 cc engine never reached production. Instead the company concentrated on small diesel engines for the maritime market.