4. Unusually large block in the wall of the dam known as Echo Pond at Warmley 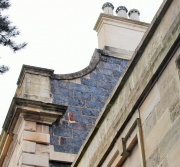 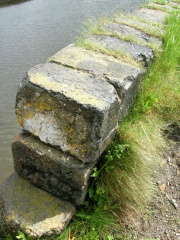 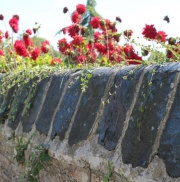 10. River Frome in Bristol, a short distance upstream of the culverted section. Triangular capping blocks used for what could loosely be called 'decorative' purposes.

The smelting of copper in the south west of Britain in the 18th century brought with it the problem of disposing of large quantities of slag, which tended to be dumped in nearby rivers. At the copper and brass works at Warmley, small quantities of rough slag lumps had been used for facing and capping walls.

At some point it was realised that the molten slag could be poured into moulds to produce blocks to be used for building purposes. These were of various shapes, mostly rectangular or, for capping walls, triangular or semi-circular in cross section, and probably cast in iron moulds. The rectangular blocks have no draft angle, suggesting that their moulds were dismantled to release the blocks. The simplest mould might comprise a pair of cast iron L-shaped walls clamped together, and clamped to an iron baseplate. However, R. R. Angerstein visited the Crew's Hole (Bristol) works of The Brass Wire Company and made small sketches showing moulds for copper ingots placed below the tapping holes of furnaces. These are shown as double moulds (for two ingots), whose sides comprised three components: a pair of L shaped sides and one shaped like an E with the central bar of the E extended the full length of the mould. It is quite possible that similar types of construction were used for the slag moulds.

Photo 3 shows a special corner block, probably cast in a standard mould modified by inserting a cast iron 'fillet' in the corner. Note the two round holes - indicating the presence of protruding pins to secure the fillet?

The blocks, largely composed of silicates and iron oxide, are extremely durable, although somewhat brittle. Their durability made them well-suited for use as coping stones on boundary walls.

Blocks can be seen in large numbers close to navigable waterways in areas frequented by vessels in connection with the copper trade, for example the Swansea area, the Wye valley, the River Severn, the Bristol Avon, and parts of Cornwall. Blocks have also been found in Staffordshire, and at Warrington in Bank Hall Park, which was once the garden for Bank Hall, which was built in 1750 for Thomas Patten, who owned copper works at Bank Quay, Warrington and Stanley Bank, St. Helens.[1]

It is not clear when copper slag was first cast to produce building blocks. The former home of Nehemiah Champion III - Clifton Court in Clifton, Bristol (now the Chesterfield Hospital) - has end walls constructed from slag blocks. See photos 5 & 6. Building started in 1742.