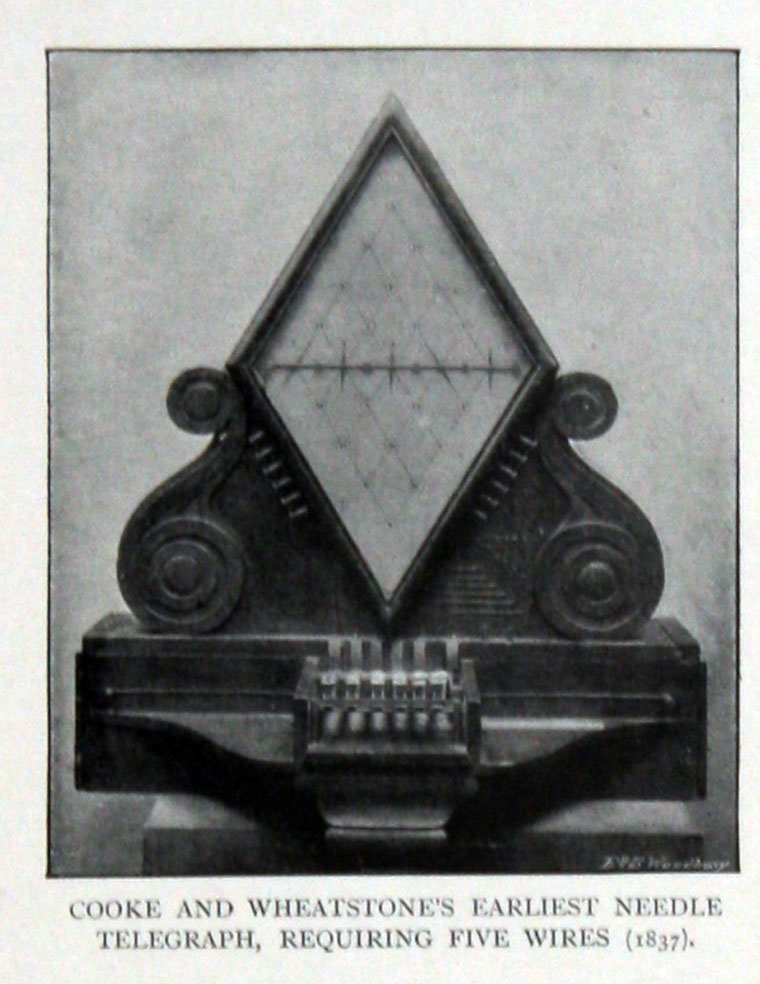 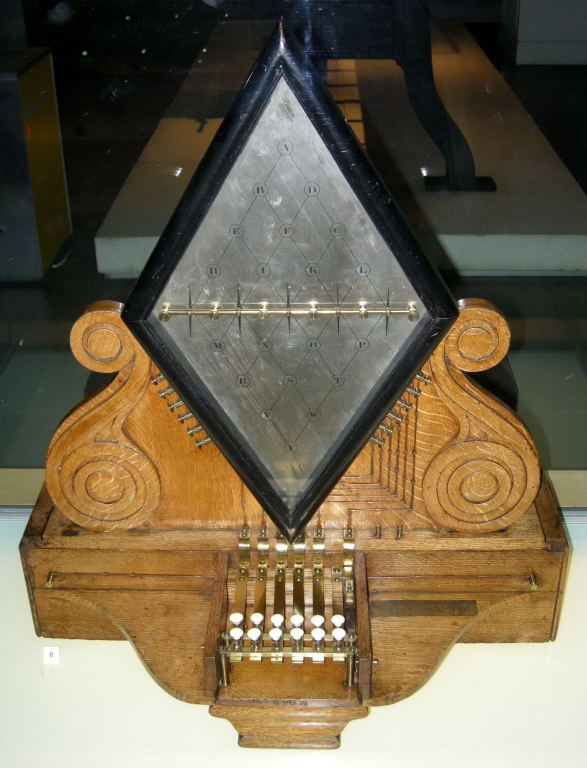 William Fothergill Cooke was a scientist and Charles Wheatstone an entrepreneur. They teamed to pool resources and ideas and produced the needle telegraph.

Wheatstone had the brains for technology and Cooke approached the railway companies with the idea of running their lines beside the tracks.

The only drawback was that the message transmitting code was rather awkward and only used twenty letters of the alphabet. The missing letter were C J Q U, and there were no numbers. One pair of the five needles pointed to the letter being transmitted.

1839 'The Electro-magnetic Telegraph of the Great Western Railway. —
This telegraph, which is the useful and scientific invention of Mr. Cooke and Professor Wheatstone, of King's College, has been, during two months, constantly worked at the passing of every train between Drayton, Hanwell, and Paddington. At the former station it, for the present, terminates. As soon as the whole line is completed, the telegraph will extend from the Paddington terminus to Bristol, and it is contemplated that then information of any nature will be conveyed to Bristol, and an answer received in London, in about twenty minutes. Merchants and others, residing not only at the two extremities of the line, but at any of°the intermediate stations, (at all of which dial plates will be fixed with competent persons stationed to work the telegraph) will then be enabled to avail themselves of the benefits and facilities of Messrs. Cooke and Wheatstone's invention. Two of the boys from the Deaf and Dumb Asylum in the Kent-road have been at the Paddington station for five or six weeks, where they were instructed in the working of the machinery by Mr. Ralph Hutchinson, and they are now perfectly competent to superintend the telegraph at any one of the stations. A piece of machinery, simple but unerring, to which is attached a check-string to indicate to the boys (who cannot hear the signal bell) when the signal is sent up the line to show that something about to be telegraphed, has been invented by Mr. Cook, which enables these lads to perform this duty as efficiently as if they were not suffering under the deprivation of hearing and speech. The telegraph has now been in operation for nearly twelve months, and not the least obstruction to its working by any of the wires, &c. becoming out of order has yet occurred. Should such an event take place (especially when the whole line is open to Bristol) it might occur tp many that there would be considerable difficulty (as all the wired are inclosed in a hollow tube, not more than about an inch in diameter) in ascertaining, throughout the 117 miles, the precise point at which the injury required to be repaired; but this apparent difficulty has been met by Mr. Cook, who has invented a piece of mechanism which is contained in a mahogany case, not more than eight inches square by which means the precise spot on the line where the injury might have been occasioned would be indicated in an almost incredibly short space of time. The invention may now be termed perfect all its details, and only awaits the completion of the line of railway to Bristol to bring it into full operation between that city and the metropolis.'[1]

1845 John Lewis Ricardo bought the singe-needle telegraph patent from Charles Wheatstone and William Fothergill Cooke[2]. Together with George Parker Bidder, Robert Stephenson, and others he formed a Company - which became the Electric Telegraph Co - to provide telegraphic communication for the public.