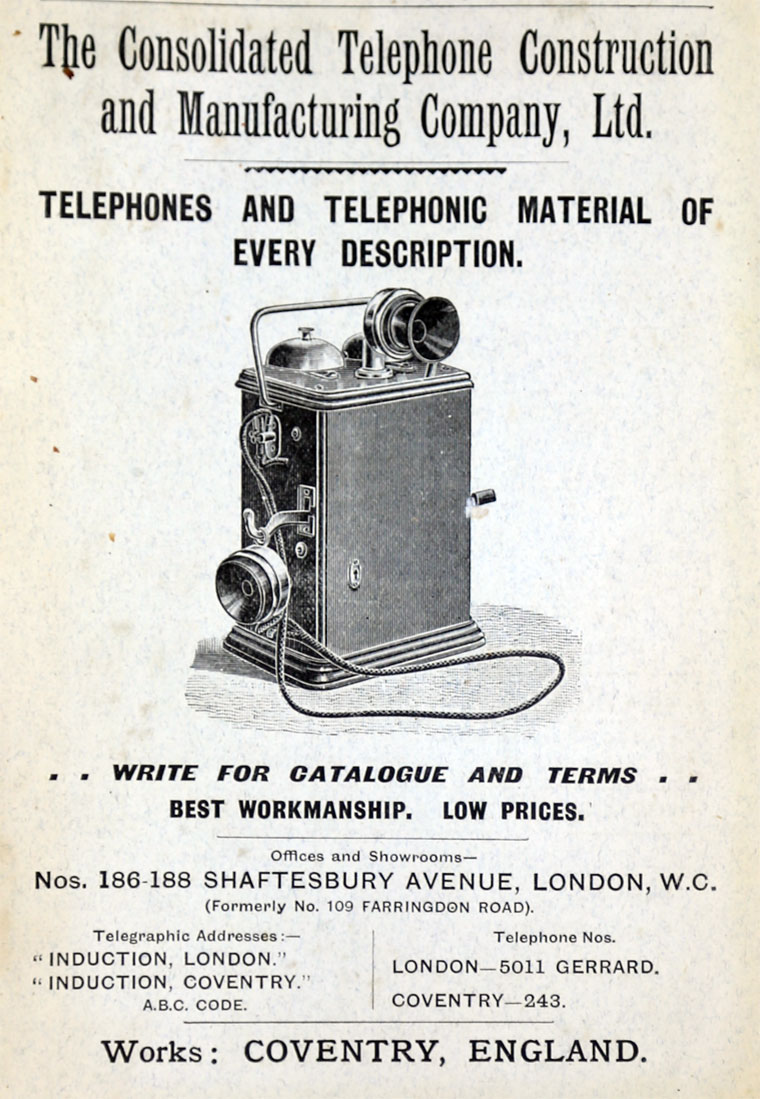 An early manufacturer of telephone equipment including Bell-design phones as well as a few designs of its own[1] with public offer of shares. Factory in London[2] and Coventry (see advert).

1882 Factory was too small to allow expansion[5]

c. 1883 Established the Telephone Company of Austria with 10 year licence[6].

1885 Amongst various orders in process of completion was a considerable one from United Telephone Co on behalf of the Postmaster General; AGM told that company was profitable but not sufficiently so to pay a dividend in view of recent history of rescuing the business almost from bankruptcy[7].

1892 One of 2 telephone exhibitors at the Crystal Palace Electrical Exhibition, the other being National Telephone Co[8] who were also a major user of Consolidated's phones.

1892 Plans by the Duke of Marlborough to purchase Consolidated on behalf of his new company the New Telephone Co were brought to halt on the Duke's death. It was noted that Consolidated were the only manufacturers of telephone equipment in the country, and that its monopoly would end soon as the Edison patents were near expiry[9].

1893 Enforced purchase of the Telephone Company of Austria by the Austrian Government in exchange for a sum of money equivalent to the amount that Consolidated had spent on building the business[10].

1895 Abortive attempt to manufacture typewriters for the Pneumatic Typewriter Co[11].

1898 National Telephone Co placed an order with Ericsson's of Sweden for 100,000 telephones[12] which marked the start of the end for Consolidated.

1900 Annual meeting announced; no further meetings found after this[13].