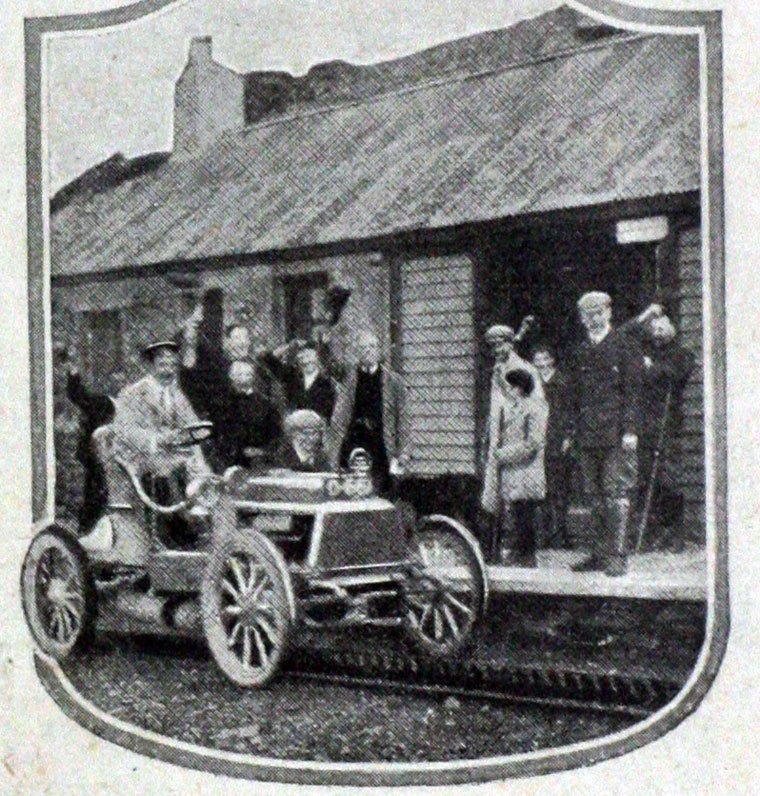 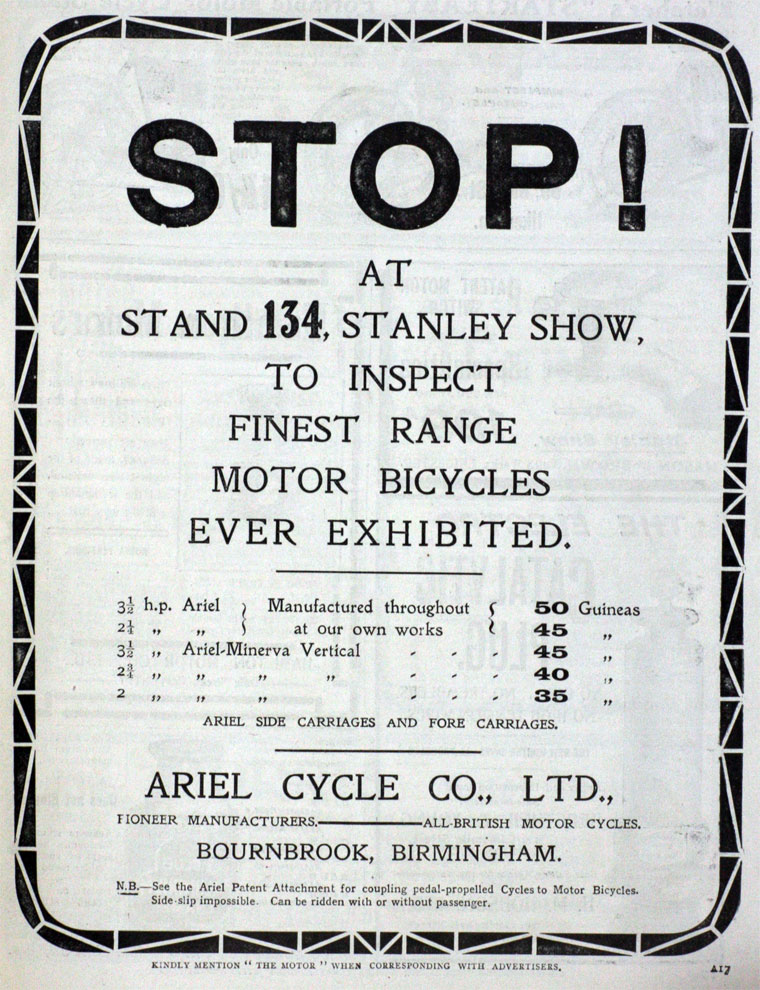 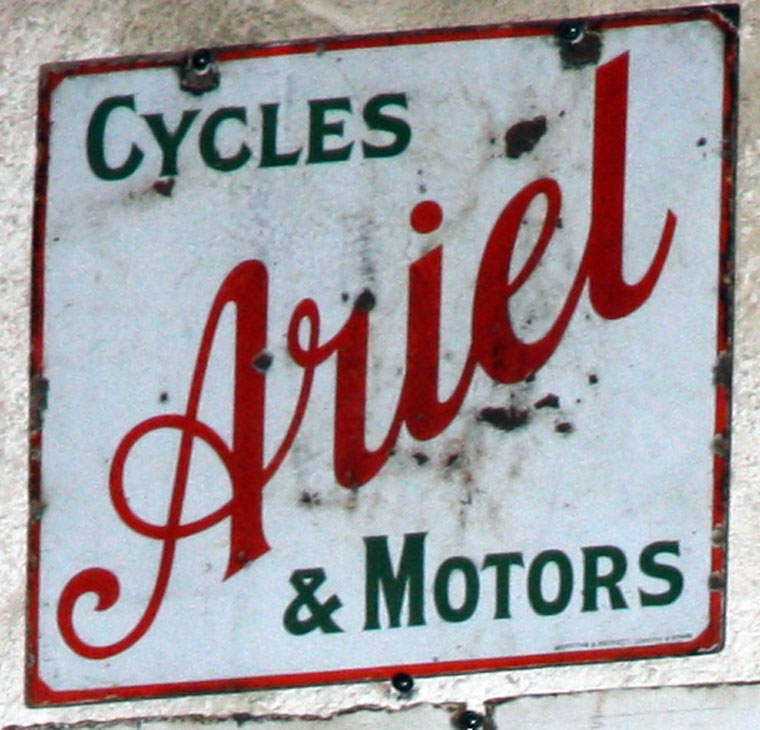 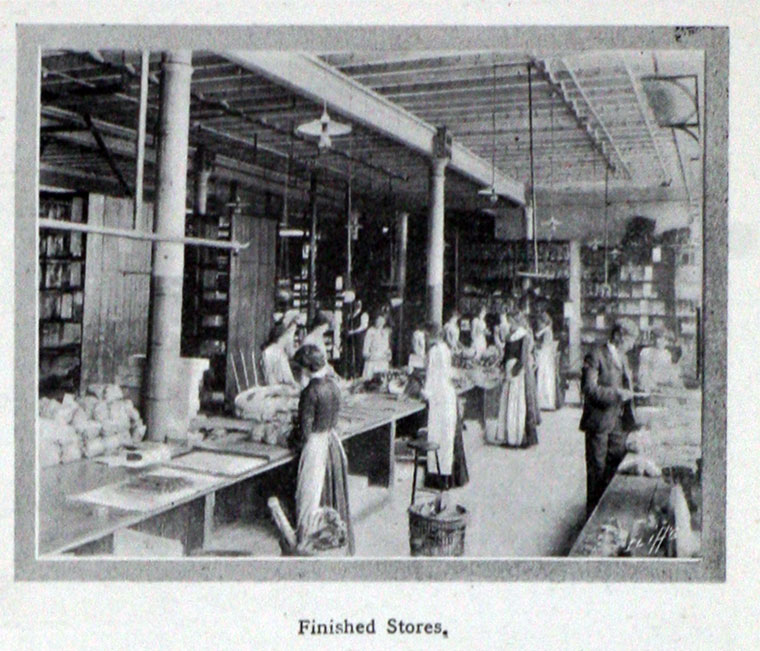 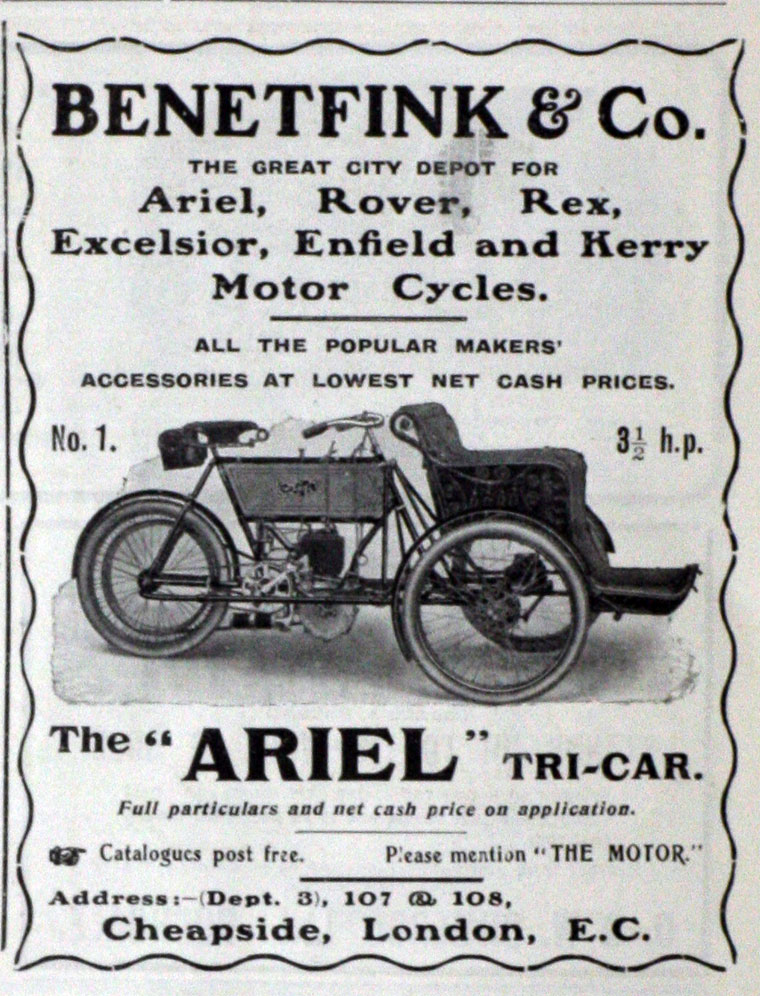 1902 The company was registered on 17 January, in reconstruction of the Cycle Components Manufacturing Co. [1]

1905 The company was a manufacturer of components for bicycles but through subsidiaries such as Ariel Cycle Co they ventured into bicycle manufacture and also into manufacture of motorcycles and motorcars which were retailed by Ariel Motors in London. They also made Fleet motorcycles which were essentially Ariel cycles using 2.75hp and 3.5hp engines mounted vertically in the frame. In common with many other models of the Edwardian era, they offered another variant with a 2hp engine hung from the frame downtube.

1906 Ariel Motors (1906) was floated as a public company to bring together the manufacture and sale of cars and motorcycles. Charles Sangster was MD.

1908 Components Ltd saw little future in cars and decided to dispose of that side of the business to the French car company Societe Lorraine-Dietrich[2].

1910 One basic model of Ariel car replaced all the others. Later that year the new and advanced Arielette was announced. Various engines were used, including White and Poppe, Abingdon King Dick and Motosacoche.

1911 By now, Ariel had purchased the rights to White and Poppe and had begun to make engines themselves, with a much higher capacity. They soon produced models, from tourer to TT racer, with a variety of belt-drive transmissions.

1911 Makers of components for Fleet and Ariel bicycles[5].

1912 Due to the expansion of their motorcycle business, Components Ltd bought back the Bournbrook site in 1912[6].

1917 (or possibly before) Ariel Works was established [7] to handle the motorcycles and motorcar activities (including the racing teams); this name continued to be used until 1932.

There is of course no one connected with the cycle or motor trades who is unacquainted with the name of this firm. The general policy of Components Ltd. has been to do their trade as a trade house through agents, and in order to impress this fact upon the agents, they have adopted a system of personal canvass and direct advertisement, which renders their name absolutely a household word throughout the trade. Familiar, however, as the name of the firm may be, few who have not been over the factory could have any idea of the really enormous scale on which Components, Ltd., carry on business as cycle and motor manufacturers. The full area of the factory is 324,900 square yards, and in order to appreciate the size of this a few other figures may be interesting. Throughout the building there are thirteen miles of telephone wires. The workbench accommodation runs to nearly two and three-quarter miles and there are nine engines and eleven boilers, whilst employment is given to 1,800 work people and nearly 100 clerks, so that it will be easily seen, without the necessity of going more into detail, that the works of Components, Ltd., are organised on no small scale.

Starting in 1895, with the amalgamation of various component parts firms, the company within two years had erected the present enormous premises, and began business as manufacturers of rims, valves, and inflators for the big tyre firms, and the turnover in this direction was absolutely enormous. After a time the company went into the fittings trade, and whilst there was the rage for small makers building their own machines, Components, Ltd., took a large share of this particular trade. The advent of the cheap machine, however, has cut very largely into this class of business, and therefore, at the present time, the company's trade is made up chiefly of the manufacture of Fleet bicycles and the firm's speciality, the manufacture of a really first-class complete cycle, to which can be fixed the agent's own transfer for retailing under his own name. The appreciation of this policy is evidenced by the fact that we were shown drawers containing the transfers of over 700 different agents, who, buying complete machines from the Bournbrook house, keep a stock of transfers there to be fixed to the machines as completed.

Besides this branch of the business, Components, Ltd., are manufacturers on a very large scale of what may be termed the accessories of the agent, such as complete hubs, fork sides (of which they have practically the monopoly of the trade), rims, mudguards, handle-bars, the well-known and varied Liberty parts, such as tyres, free-wheel hubs, brakes, pedals, chains, and other similar articles which are turned out literally by the thousand, and in turning out a quantity the quality is by no means indifferent. The designs of all the goods manufactured by Components, Ltd., are of the most up to date description, and the quality of the material employed is, of course, second to none. The variety and range of choice offered to the agent by the company is remarkable. Take the question of the cyclist alone. The agent who desires to purchase machines to sell under his own name and transfer is offered a selection which would satisfy the most fastidious. He can have featherweight, path-racer, road-racer, a X frame, or diamond roadster, and every variety of ladies' machines, so that whether an agent is just starting in business, or whether he is an old and experienced hand, there is no doubt but that the Components' catalogue is likely to afford him not only interesting reading, but a considerable amount of information and food for reflection.

In connection with the big Components firm is the Midland Tube and Forging Co, and the variety of drop forgings manufactured is very great. We saw samples of revolver stocks, stirrup irons, and other general goods, without mentioning those particularly affecting the cycle trade, which were there, of course, in bewildering profusion. It is hardly possible to conceive any kind of drop forging required that could not be promptly supplied by the Midland Tube and Forging Company.

To go back to Components, Ltd., who, in connection with the Tube Co., boast that they can supply everything from a forging to a motor car, we may notice that the claims of the motor industry have been by no means neglected. One large shop is devoted entirely to the building of Fleet motor bicycles, every part of which is actually made on the premises.

In another department, as we show in our illustration, the most up to date and powerful motor cars are erected and built, and the motors turned out by this company at Bournbrook have, at the first time of asking, made a name and reputation for themselves second to none. It was, we may remind our readers, a motor car built by this firm which first achieved the climb up Snowdon. In a big concern like this lunch, of course, depends upon the organisation, and in this respect Mr. Charles. Sangster, the managing director, is ‘facile princeps’.

In our tour of the works we were particularly struck with the system on which everything is done. Take, for instance, the small matter of agents' transfers, which forms a subject of one of our illustrations. Although the number of these run, as we have said, into hundreds, they are so sorted and arranged that at a moment's notice any particular agent's transfer can be produced. The same organisation is noticeable every department. The packing and despatching room moves with the utmost smoothness. The stores are conducted on a recognisable principle, and not in the haphazard manner which is the case with some firms; and, in fact, everything that organisation can do to ensure success is done by Mr. Sangster and his large staff, and the policy of considering the agents' interest as well as the company's has undoubtedly led to agents throughout the kingdom forming a very high opinion of the Components' methods and their goods.