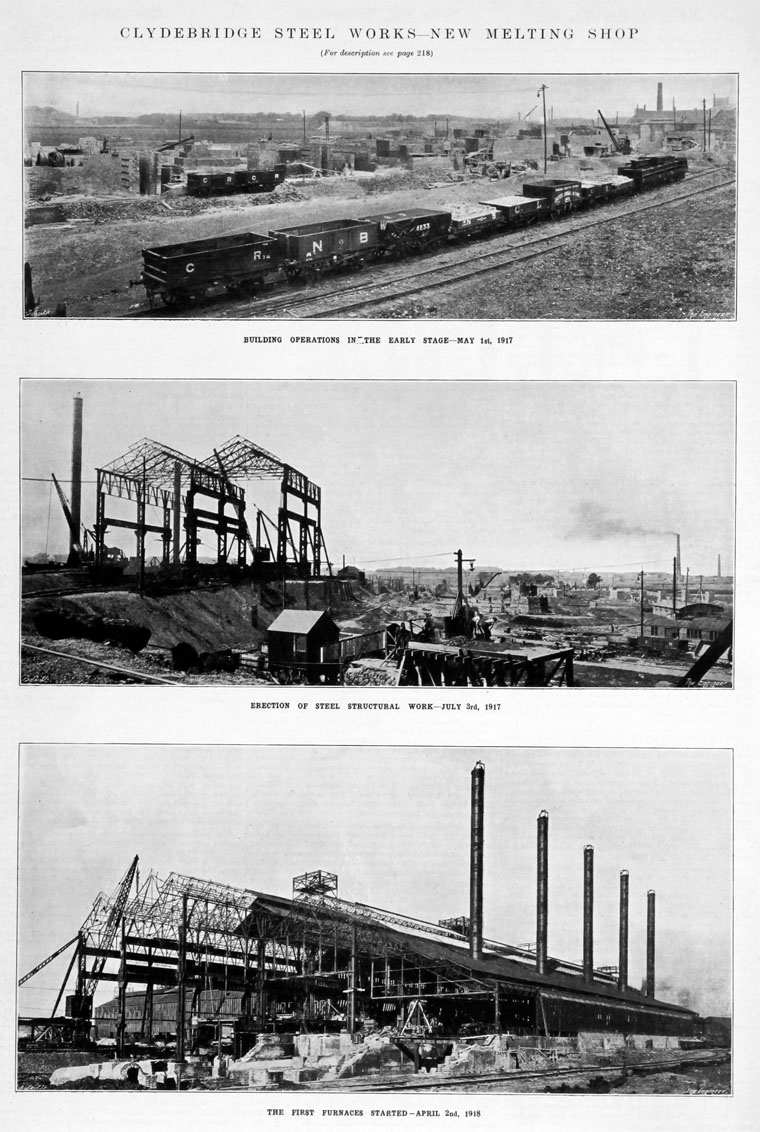 1923. Section and Plan of New Portion of Clydebridge Steel Works. 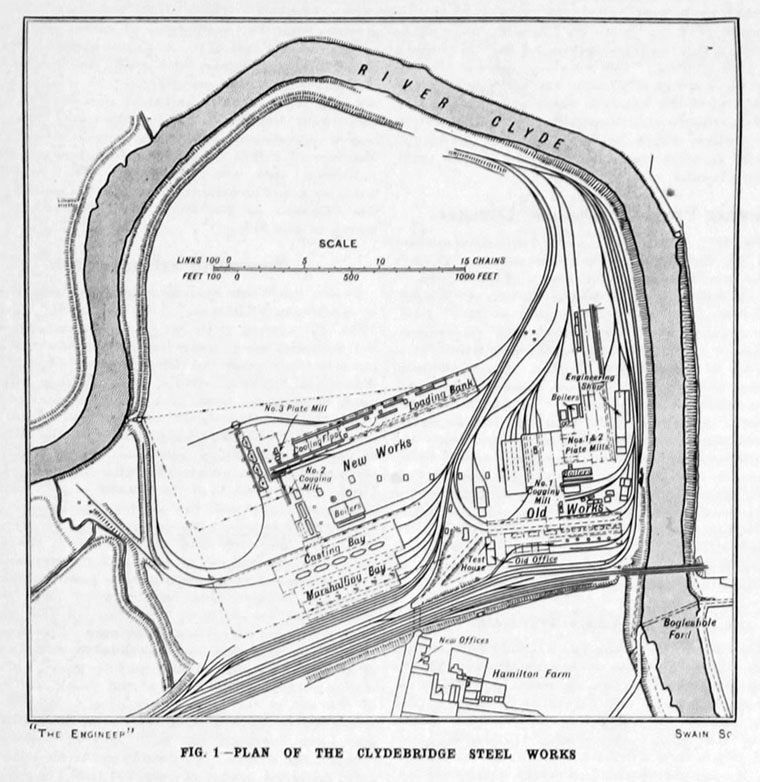 1923. Plan of The Clydebridge Steel Works.

The Clydebridge Works was a producer of steel

1887 Started by Walter and Hugh Neilson, sons of William Neilson (1810-1882) of Mossend, with a sufficient number of partners to make up a private limited company, and at a cost of £90,000, two thirds of which was provided by the Neilson family. The Nielson family were closely related to James Beaumont Neilson, famous for the hot blast process, first tried at Clyde Iron Works in 1828.

Hugh Neilson ran Mossend Iron Co but retired in 1886 to set up Clydebridge. The original manager of Clydebridge was James Neilson, who was regarded as being 'the most vindictive anti-trade union employer in the Scottish iron and steel industry'. This was a boom time in the industry and there had been many strikes by miners and steel workers, which had resulted in wages rising by 15 to 20 % at other works.

By the time Clydebridge started operating, the other steel works could not keep up with the demand from the shipyards. Strikes were also common and wage rises of 15 to 20% were being offered to help keep production going to meet the demand. At this time the early adoption of the open hearth had given Scotland, and Wales, a lead over much of the rest of the UK. However, the initial boom led to increased competition, and increasing production, so not all of the new works survived. The Clydebridge Steel Company was one that only just survived.

By September 1889 the Millmen's Union had established a branch of 50 members at Clydebridge. The management gave notice to 13 of the members and the others went on strike, shutting the works for four months. All efforts to settle the dispute "by arbitration and other reasonable means" failed and "all attempts at conciliation had been met with curt refusal". Even after a change of management, labour problems continued, and efficiency was low.

At Clydebridge new buildings were erected that doubled the size of the works. These comprised a new No.2 melting shop, with five 60 ton open hearth furnaces with stockyard and producer bench, and a new cogging mill bay with soaking pits, etc. The No. 3 'Heavy' Plate Mill, which was used for rolling wide plate, was dismantled and sent to Dalzell works to be converted into a new No. 2 Cogging Mill, and a steam hydraulic guillotine provided to cut the slabs to length. Later, a new engine was put down at the independently driven No.2 'Light' Plate Mill and the No.1 Plate Mill put into good order.

1914 With the outbreak of war there was a sudden demand for steel billets to make high explosive shells and an increased demand from shipbuilding. David Colville and Sons were asked to lease and extend Clydebridge. However, the owners could not agree the terms.

1915 Colvilles decided to purchase the works. The transaction was completed in October 1915

The Melting Shop then contained six 40 ton and two 60 ton open hearth furnaces, and a foundation for another large furnace. A cogging mill supplied the plate mills, of which there were three, so arranged that only two were worked at one time, No.2 being independently driven, while No.1 and No.3 (No. 3 was installed in 1907) had an engine in common. The cogging mill was altered to roll 6 inch and 8 inch shell bars, and a Shell Shop erected, with six batteries of hacksaws to cut the billets to shell lengths. A new 60 ton furnace was built on the spare foundation in the Melting Shop, making the total output of ingots available about 2,000 tons weekly. Extensive alterations were also carried out in other areas, with a view to speeding up the output.

1917 The Clydebridge Steel Company was liquidated in February.

1917 The new works began producing steel at the end of 1917, and in May, 1918, the new cogging mill was put into operation. Thereafter both plate mills were kept fully supplied with slabs, and were able to produce about 1,500 tons weekly; 2,000 were now employed at Clydebridge.

1921 A new 3 high, electrically driven, plate mill was installed at Clydebridge in 1921-1922 to meet the expected demand for shipbuilding. However, the slump in trade closed the works for several months and the brand new mill was idle until the works restarted on the 20th February 1923. At this point in its history Clydebridge had survived its difficult early years and was now set to grow. Following a partial recovery in 1923, there was a decline in 1926 with the general strike and coal crisis. There was a recovery again in 1927 but then another economic downturn in 1930-32. Production gradually recovered again leading up to the eve of WWII.

1923 "The Clydebridge Steel Works of David Colville and Sons, Ltd., are equipped for an output of over 5000 tons of plates per week, and, so far as the new portion of the works is concerned, represent the latest methods in steel works practice. Before giving a detailed account of the new plant, which we propose to so in what follows, reference may be made to the origin of the Clydebridge works and the development which has taken place during the last ten years." From The Engineer 1923/08/31; also see The Engineer 1923/09/07.

1939 With hot metal working from Clyde Iron, Clydebridge became one of the largest integrated steelworks in the UK, setting world records for the production of sheared plates used to build most of the famous ships on the Clyde (and at Harland and Wolff in Belfast) such as the Lusitania, Mauretania, The Empress of Ireland, Queen Mary, Queen Elizabeth, QE2. It would reach its maximum size with the addition of the 4 high plate mill and new shearing facilities in the early 1960s, and the expansion of the heat treatment plant in the 1970s.

1955 Public sale of shares in Colvilles

1977 The peak of production was reached, just before the widespread closure of most of the UK's open hearth melting shops and closure of the cogging mill. At its peak it had employed 3,500 people. Clyde Iron Works also closed, after operating for 192 years. After this, Clydebridge continued to be supplied with continuously cast slabs from Ravenscraig, but with the demise of shipbuilding in the UK the demand for steel plates fell and the plate mill rolled its last plate on 12 November 1982.

The heat treatment and quenching plant survived as it was still new and in demand. Some of the shears plant also survived and the remaining works, run as a satellite of Dalzell Works, are still in operation in 2007, some 120 years after it all started.