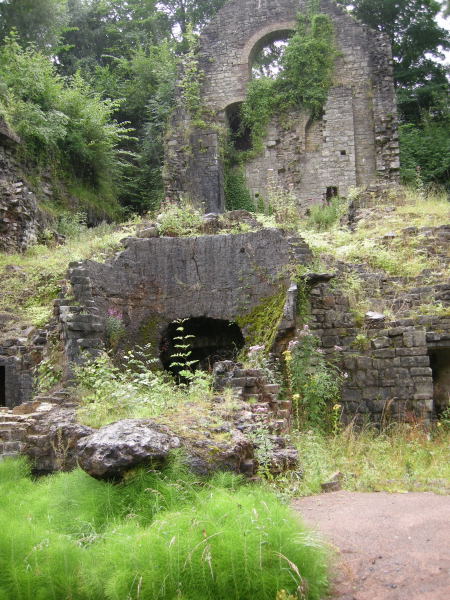 Established in the 1790s with coke-fired blast furnaces

1820 Advert: 'To Smiths, Dealers in Iron, &c.
Edward Frere and Co. of the Clydach Iron Works, respectfully inform the Public that they have established a Depot for the sale of IRON of every description, in the City of Oxford, and have appointed Mr. EDWARDS, the firm of BROWN and HOWARDS, their sole Agent for the City and Vicinity of Oxford ; who has been in the constant habit of vending, as well using it in large quantities for the last Eighteen Years.
N.B. A trial will prove its superior quality.
Premises wanted for an Iron Warehouse, near the bottom of the High-street.'[1]

1826 A third circular furnace was constructed

1842 A fourth furnace was constructed.

In 1986 the site was excavated and partially restored but it was subsequently abandoned. The exposed remains include three furnaces and one charging house, together with the pit for a 12.8m (42ft) diameter cast-iron water-wheel. The air blast for the original furnaces 1 and 2 was provided by the waterwheel; air for furnaces 3 and 4 being provided by a steam engine. [3]

The site is accessed by Smart's Bridge, spanning the Clydach River, which is a cast-iron structure of lancet tracery dated 1824.