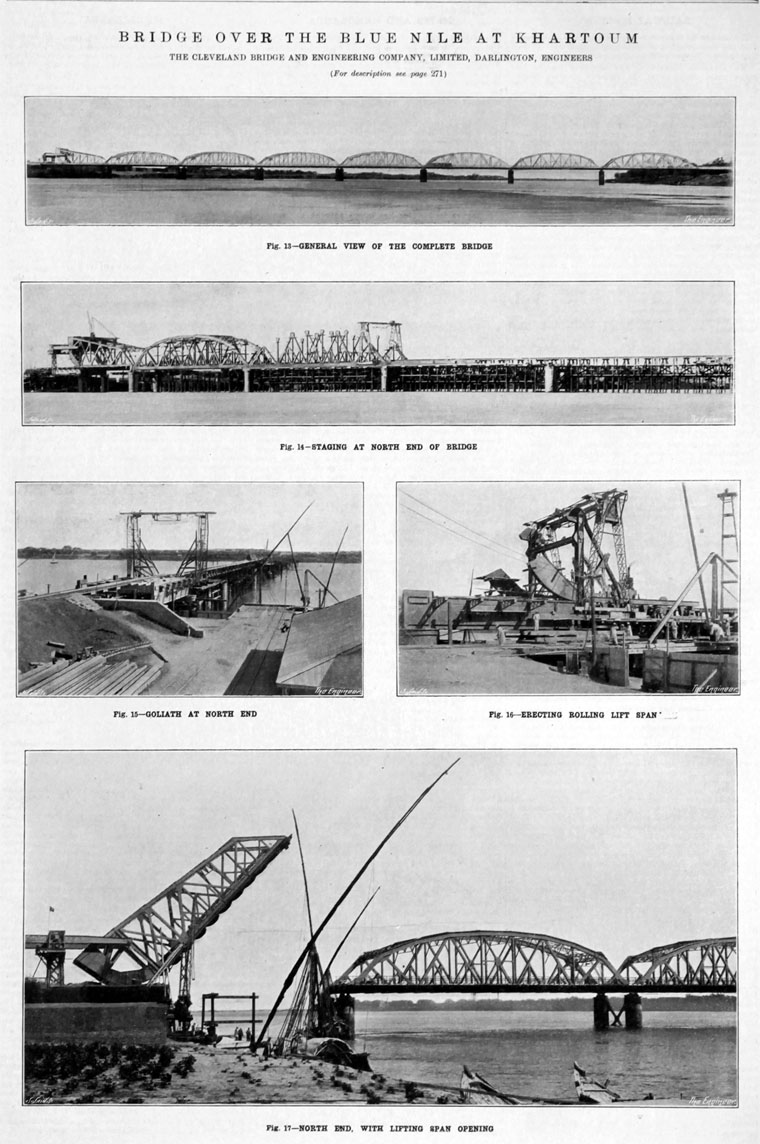 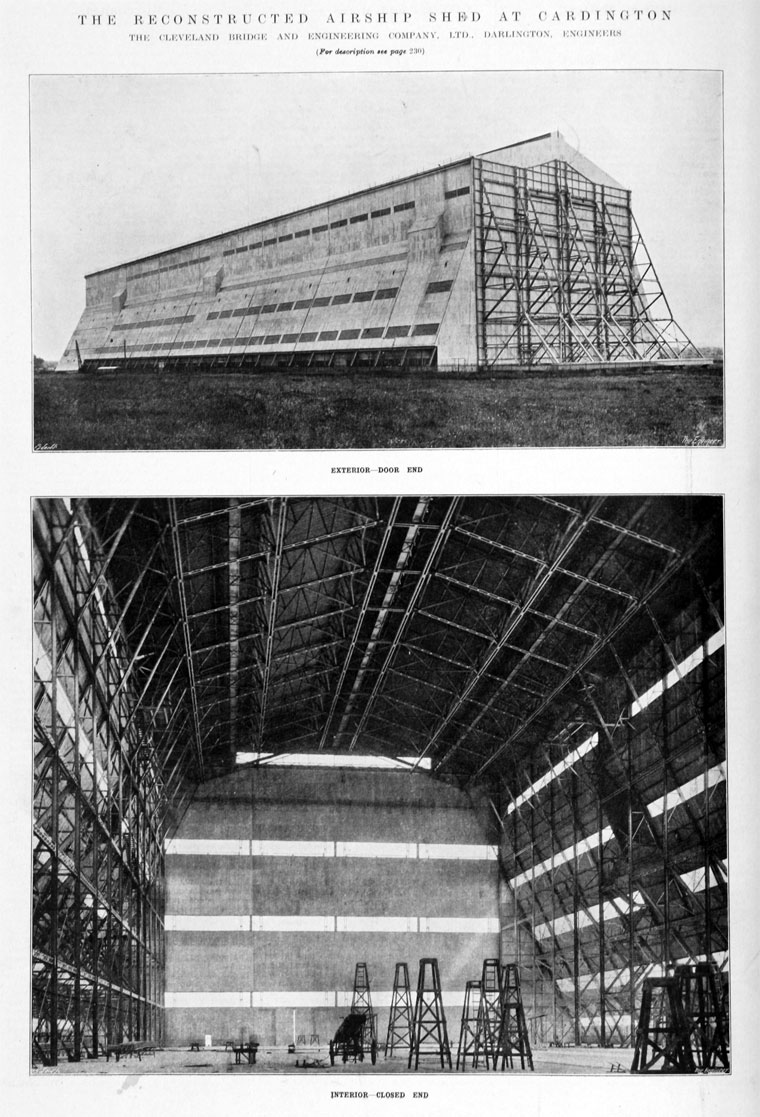 1927. The Reconstructed Airship Shed at Cardington.

1938. Turret and Telescope at Pretoria. 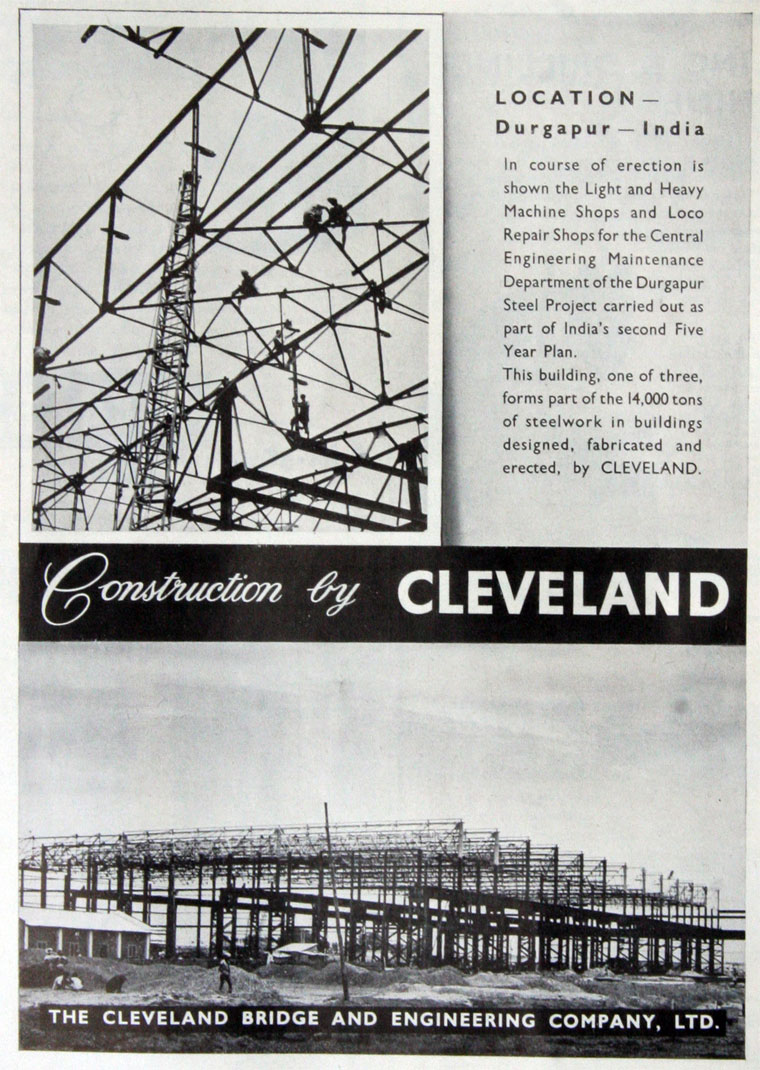 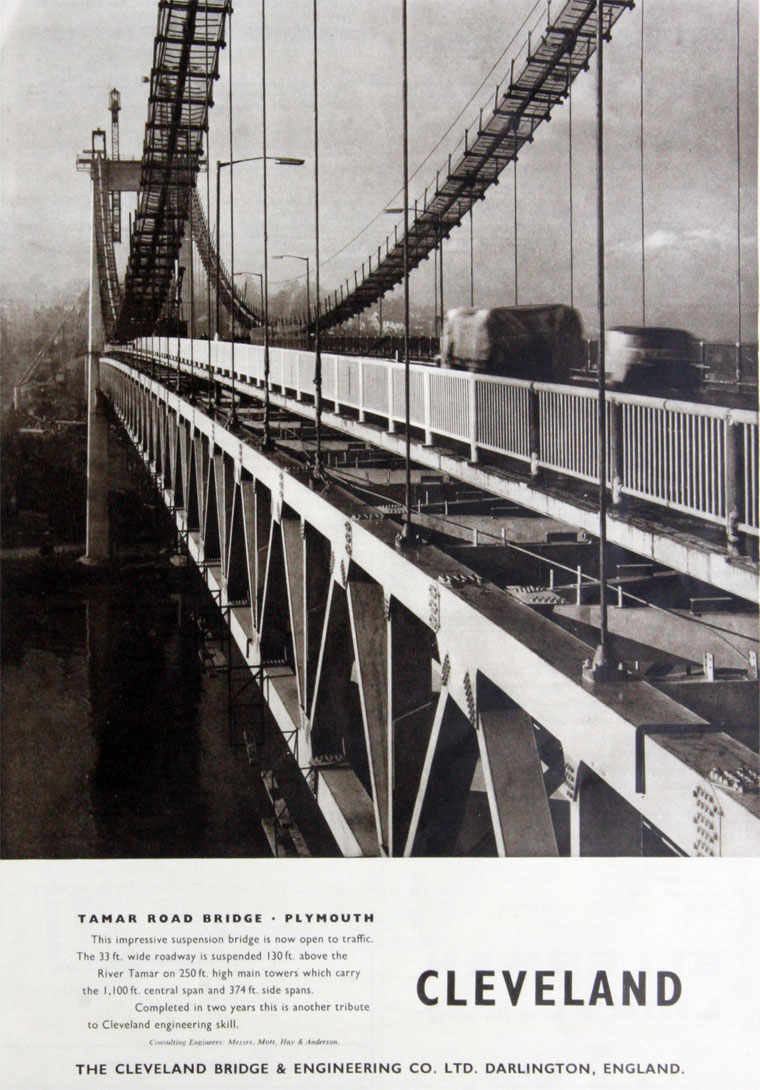 of Bank Top, Cleveland and of Darlington.

The Cleveland Bridge and Engineering Company Ltd of Smithfield Road, Darlington - between Neasham Road and the main railway line at Bank Top.

1877 The company was established. A number of small investors from Darlington, Stockton and elsewhere subscribed to its capital of £10,000, in 200 shares of £5. The stimulus for its foundation is said to have come from former employees of the struggling Skerne Ironworks. Its main shareholders were Henry Isaac Dixon, merchant, and Henry Ernest Dixon, gentleman, both of Sheffield.

1885 The goodwill, tools, stock, land and buildings were sold to Charles Frederick Dixon for £10,500 and the original company wound up. Dixon, sometimes described as the founder, was a younger son of the Sheffield firm of James Dixon and Sons, silver and electro-plate manufacturers. He had been connected with the Cleveland Bridge company since about 1882, apparently as company secretary while H. E. Dixon acted as manager, and was from 1885 managing director as well as main shareholder.

1894 The business was said to have been 'steadily advancing in importance' ever since, and to 'stand unrivalled for high class work and facility of execution'. Its list of bridges was growing, and included the North Eastern Railway viaduct across the Tees at Barnard Castle as well as many others in North and Central America, India and Australia.

By the turn of the century, the company was expanding its plant to keep up with orders. A gas engine had been installed to generate electricity for power and lights - the mains supply came in 1912 - there were new gantry cranes and an hydraulic press. A visitor in 1899 noted that the firm had £150,000 of orders on the books, and that the previous year's output of 7,000 tons had been a large increase on 1897. In progress in the works at that time were the River Avon viaduct, a road bridge for Brazil, a Thames viaduct for Maidenhead, a 700-ton railway bridge to cross the Calder in Mirfield, and various smaller commissions.

1905 The company enjoyed great success during the following fifteen years

1905 Its first major bridge crossed the Victoria Falls. Locally there were the King Edward VII high level bridge over the Tyne at Newcastle, and the Middlesbrough Transporter Bridge (1910-1).

A link with the founding partners of the Skerne works was maintained through William Edwin Pease (d.1926), son of Edwin Lucas Pease, who became chairman of the company some time after his father's death in 1889. He was also a director of the Consett Iron Co.

1911 Bascule bridge over the River Towyn in Carmarthen. [2]

By 1913, the Cleveland Bridge and Engineering Company Ltd was among the town's largest businesses, with 600 employees.

Between the wars, its product range extended to steel structures such as power stations, hangars, pipe lines and dock gates. The company built the world's longest bridge, across the lower Zambesi, over two miles long, and largest rail wagon, a 200-ton bogie, 93 feet in length, for the Russian government. There was also a floating landing stage, 1,100 feet long, at Tilbury, power stations for the City of London, and 17,000 tons of steel pipes to carry Calcutta's water supply.

In the build up to war, the company was producing transportable aircraft hangars for the Air Ministry. To accommodate the increased activity the works had extended over 30 acres, with a main assembling shop 800 feet long. Large structures were temporarily put together in a four-bay erection yard, then marked with identifying symbols to make them more easily rebuilt on site.

The company then had about 400 employees in Darlington, although there were always large numbers - sometimes as many again - employed on site.

1926 Began the work of constructing the Boothferry Bridge over the River Ouse between Howden and Goole. The work was to occupy two years and cost £100,000. [4]

WWII On the eve of the second war there were 525 men in the works, and by December 1942 the company, in common with other engineers in the town, had come to depend upon women, who made up 110 of a workforce of 717. Wartime work was much lighter: small bridges for the Ministry of Supply 'for use in the field'; light hangars; steelwork for fabricated ships. 'We are now ship-builders', they told visiting government economists, and also expressed concern that the pre-war export market in bridges would not return.

Postwar: An immediate problem at the end of the Second War was obtaining supplies of steel, but the company was able to employ more than in 1937, about five to six hundred people.

In 1967 the company was acquired by The Cementation Company which was bought by Trafalgar House in 1970.[5]

Although bridge-building may not have returned to its previous level, for more than thirty years the works was constantly busy with nine major power stations and, later, with off-shore drilling for oil and gas.

1990 Dorman, Long and Co merged with the Cleveland Bridge and Engineering Co, and the business was still involved in the design, manufacture, fabrication and erection of many different types of structures such as bridges, buildings, offshore platforms, airports, etc.