A closer view, which shows more clearly the transverse plates between the ribs and the later steel arches and reinforced concrete lattice structure 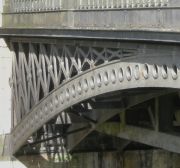 Cleveland Bridge, in Bath, was built as a cast iron arch bridge. It has unusual lodges that adorn each corner in a style that could be likened to miniature Greek temples.

Cleveland Bridge links the A4/London Road in Bath with the A36 via Bathwick Street, at the point where it is joined by St John's Road.

It was built in 1827 by William Hazledine with Henry Goodridge as the architect, on the site of a Roman ferry crossing.

Named after the 3rd Duke of Cleveland, it spans the River Avon at Bathwick, and enabled further development of Georgian Bath to take place on the south side of the river. It was designed to take the traffic of his day, horse drawn vehicles and pedestrians, and was constructed using the warm golden Bath Stone and an elegant cast iron arched span.

A toll house was required to charge users of the bridge for the privilege of crossing. Rather than building merely one, Goodridge decided to install four — one on each corner — in order to maintain the absolute symmetry of his elegant neoclassical design. He provided each of these lodges with columns fronting onto the bridge, giving them the appearance of small ancient temples. Only one of the four (Number 1 next to St John's Road) was actually used as a toll house; the rest were always let to private tenants as small dwellings or shops.

The bridge was constructed using funds subscribed by numerous local wealthy citizens to a specially formed Bathwick Bridge Co with a view to investors making a return on investment through the toll charges.

An Act of Parliament was required and, in a move which would later prove the undoing of the company, the level of the toll was fixed at one penny. Unfortunately for the shareholders of the Bathwick Bridge Company, inflation took hold during the 19th century and, by the early 20th century, a one penny toll was not worth much. By the 1920s, the revenues from tolls no longer covered the costs of operating and maintaining the bridge.

The Bath Corporation Act of 1925 allowed the City Council to take over the bridge from the now bankrupt Bathwick Bridge Company. To much celebration, it was freed it from tolls for all traffic on 20 June 1927 and extensively restored during 1928 and 1929.

1929 the bridge was strengthened with 4 substantial reinforced concrete trusses between the cast iron arches to support heavier combustion-engined vehicles.[1]

After the Second World War, a shortage of cash and materials and a general lack of interest in Bath's architecture meant that the fabric of the bridge was neglected.

By the 1980s, three out of four of the lodges were derelict and concerned at the neglect of this unique structure by its owners, Bath and North East Somerset Council, a group of local individuals formed a charity (the Bath Historical Buildings Trust) to take a very long lease on three of the lodges and to restore them so that they could once again become homes for people.

The 1929 reinforcements detract from the original appearance, but the impact is limited as there are NO PUBLIC PLACES from which to get a good view of this historic bridge.