Grace's Guide is the leading source of historical information on industry and manufacturing in Britain. This web publication contains 149,658 pages of information and 235,430 images on early companies, their products and the people who designed and built them. 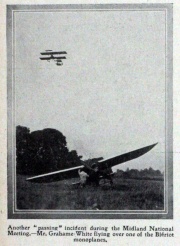 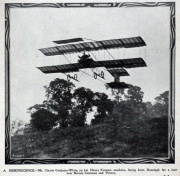 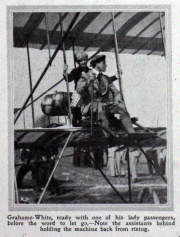 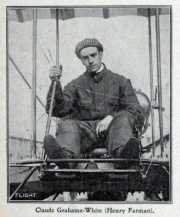 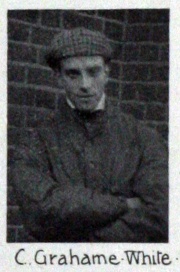 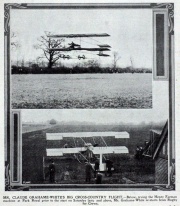 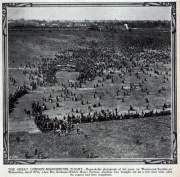 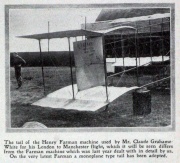 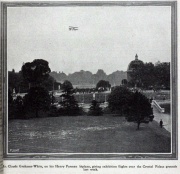 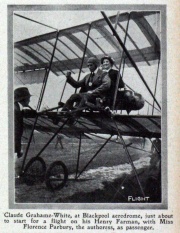 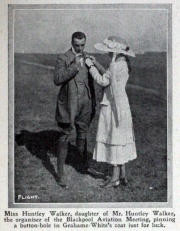 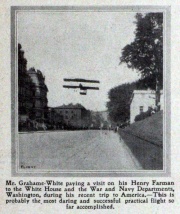 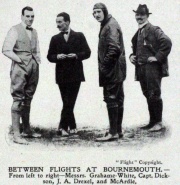 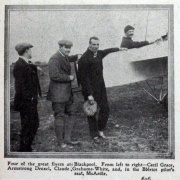 Claude Grahame-White (1879-1959) was an English pioneer of aviation, and the first to make a night flight, during the Daily Mail sponsored London to Manchester race in 1910.

1879 August 21st. Born at Bursledon Towers, Bursledon, Hampshire, the second son and the youngest of the three children of John Reginald White, a Cement Merchant and a keen yachtsman who later took the name Grahame-White, and his wife, Ada Beatrice, the daughter of Frederick Chinnock, a property agent, of London and Dinorbin Court, Hampshire.

He was educated at Crondall House School, Farnham, and Bedford grammar school

He was apprenticed to an engineering firm

Later he worked for his uncle, Francis Willey, a Yorkshire wool magnate, and it was the engineering side of the business that interested him. He persuaded his uncle to replace the firm's horse-drawn vans with motor lorries

He formed a company to service motor vehicles in Bradford, in competition with the steam trams.

1901 Claude G. White is living at 14 Hanover Square, Bradford (age 21 born Southampton), a Manager of Motor Works. Single. He is a boarder in the house of Clara Lobley. Note: In the census for Brighton his father has assumed the name John Graham White (and without the 'e' or the hyphen) [3]

c1907 He made a lengthy visit to South Africa, during which he hunted big game.

On his return to London he set up a motor-engineering business in Albemarle Street and traded as C. Grahame-White and Co

In 1909 he learned to fly in France, and became one of the first Englishmen to qualify as a pilot.

On July 2, 1910, Claude Grahame-White, in his Farman biplane, won the £1,000 first prize for Aggregate Duration in Flight (1 hr 23 min 20 secs) at the Midlands Aviation Meeting at Wolverhampton.

On October 14, 1910 while in Washington, D.C. Grahame-White flew his Farman biplane over the city and landed on Executive Avenue near the White House. Rather than being arrested Claude was celebrated for the feat by the newspapers. His noted achievements though were centred in the commercialisation of aeronautics. He was also involved in promoting the military application of air power before the First World War with a campaign called "Wake Up Britain", and experimented with fitting various weapons and bombs to planes. During the war itself he mounted the first aerial defence of a city.

1911 Established a teaching school at Hendon, which quickly became Hendon Aerodrome. The Aerodrome was lent to the Admiralty (1916), and eventually taken over by the RAF in 1919.

1911 Formed the Grahame-White Aviation Co to cover his aviation interests, including the aerodromes and developed some aircraft. One of the designers was John Dudley North who would become Boulton and Paul's chief designer.

1911 Organized the first official air-mail delivery, from Hendon to Windsor.

1914 Temporary appointment as Flight Commander in the Royal Naval Air Service[8]. He made the first night patrol over London, in search of a Zeppelin reported crossing the Essex coast.

1915 was involved in an ill-fated attack on Cuxhaven when was forced to ditch in the sea 5 miles from the Belgian coast.

1915 he resigned his commission to concentrate for the remainder of the war on government aircraft construction contracts. His company was mainly manufacturing the designs of others.

1917 Having borrowed heavily from both his uncle and the Admiralty to fund wartime expansion, Grahame-White faced mounting debts as his factory stood idle due to shortage of raw materials. In December he suffered a nervous breakdown and was hospitalized for six weeks.

He had some success with post-war plane designs, notably the Bantam single-seater biplane, but his efforts to take a lead in the development of civil aviation were frustrated by the legacy of the wartime DH-6 fiasco and the Air Ministry's refusal to return Hendon aerodrome, which the Admiralty had requisitioned in 1914.

1924 the Treasury appointed a receiver to the Grahame-White Aviation company to recover debts; Grahame-White countered with a legal action intended to recover his own wartime losses, as well as the purchase price for Hendon. Although he eventually won this case, the Treasury would not settle until Grahame-White threatened to expose the facts in the Daily Mail.

1925 Grahame White's aerodrome was purchased by the RAF, after a long and protracted legal struggle.

He gave up any active interest in flying and applied his capital to real estate in Britain and America, where several well-judged deals made him a fortune.

1959 August 19th. He died at a hospital in Nice while living at 33 Avenue Maeterlinck, Nice, France