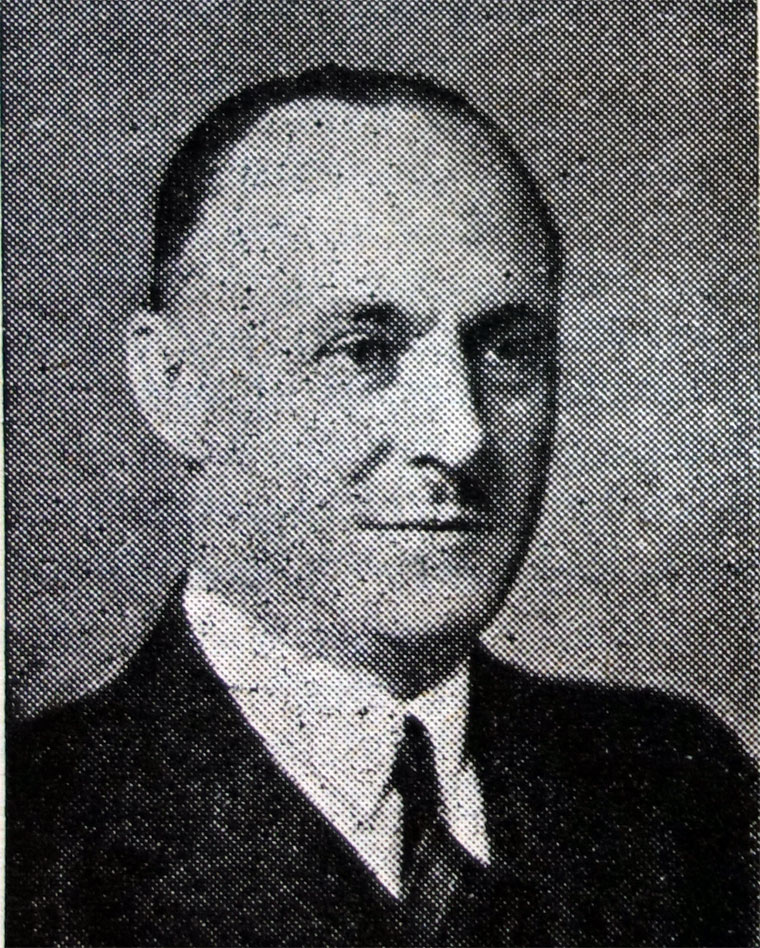 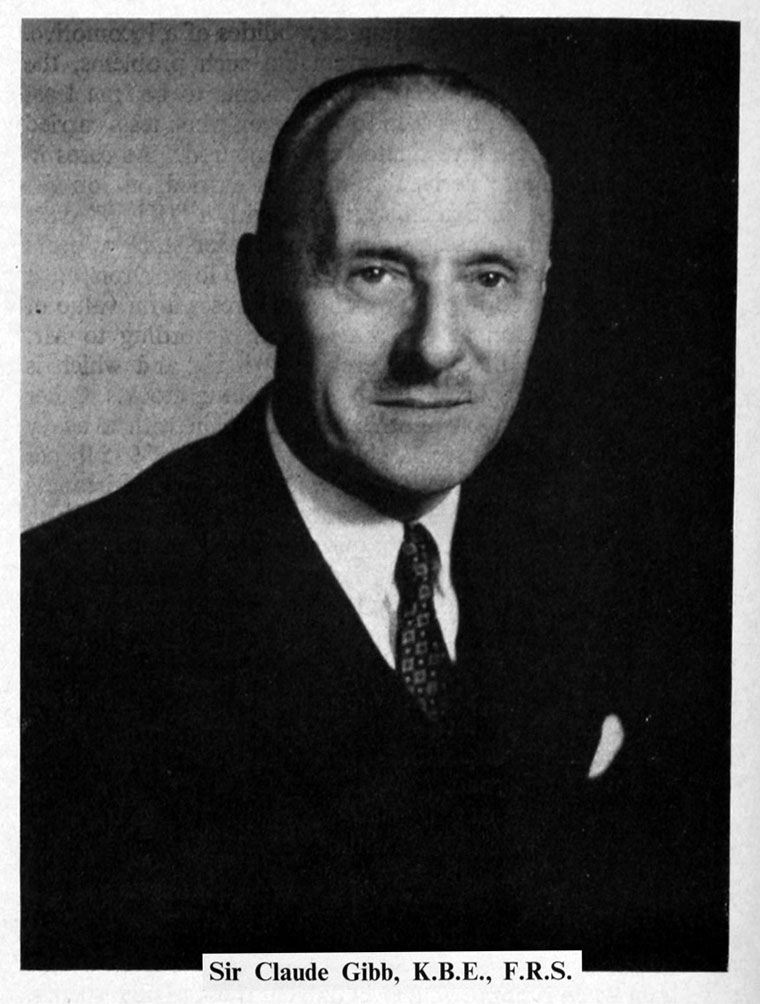 During the earlier part of the war of 1939-45, Sir Claude was Director-General of Weapon and Instrument Production, Ministry of Supply, and later became Director-General of Fighting Vehicles (Research and Development) and Chairman of the Tank Board.

He was awarded the Thomas Hawksley Gold Medal by the Institution in 1932 for his paper entitled "Post-War Land Turbine Development".

THIS country has lost one of its most distinguished engineers by the death of Sir Claude Dixon Gibb, which occurred suddenly at Newark Airport, New Jersey, on January 15. Sir Claude was on his way from Knoxville, Tennessee, to Toronto and had just left the aircraft during its brief stop at Newark when he collapsed.

Sir Claude, who was sixty, was chairman and managing director of C. A. Parsons and Co., Ltd., and chairman of the Nuclear Power Plant Company, Ltd., Anglo-Great Lakes Corporation, Ltd:, and the Parolle Electrical Plant Company, Ltd. He was also a director of A. Reyrolle and Co., Ltd., from the chairmanship of which company he had recently resigned owing to his many other commitments.

Sir Claude was born at Queenstown, South Australia, and studied at the South Australian School of Mines and Industries and at Adelaide University where he gained the degrees of Bachelor and Master in Engineering. After serving during the first world war as a pilot officer in the Australian Flying Corps, Sir Claude. spent three years or so as a research administrator and chief assistant to Sir Robert Chapman, professor of engineering at Adelaide University.

In order to extend his practical experience, Sir Claude came to th1s country early in 1924 and started work with C. A. Parsons and Co., Ltd., Newcastle upon Tyne. It marked the beginning of an outstanding period of service with the firm of which he subsequently became the head. Shortly after his arrival in this country, S1r Claude learned that he b=had secured the Angus engineering research scholarship, Australia's premier engineering award.

He spent a year as a fitter in the erecting shop at the Heaton works, moved on to a period in the design and drawing offices, and was next appointed to special duties on the company's outside erection staff. During that time he was engaged also in research problems concerned With turbine operation, an activity which led to his being appointed test house manager in February, 1927. In the succeeding months extensive re-organisation and re-equipment of the company's test plant were carried out under Sir Claude's supervision. Early in 1929, he became chief operating and test engineer and in May of that year the late Sir Charles Parsons appointed him technical director of the company.

Sir Claude's great service in those offices were recognised by the conferment of the C.B.E. in 1942 and of a knighthood in 1945. He was created a K.B.E. in 1956. At the end of the war, Sir Claude returned to C. A. Parsons and Co., Ltd., to take up the joint responsibilities of chairman and managing director. Under his wise leadership, the company embarked upon a period of considerable expansion. Extensions to the works were earned out; the output of generating plant rapidly increased as did the size of its products. As an example, it may be recalled that in 1945 the largest turbo-generator set on order was designed for an output of 52·5MW whilst last year the company received an order for a 550MW set.

It was characteristic of Sir Claude that he should have been one of the first British industrialists to take an active part in the development of power from nuclear reactors. He was prominent in the early discussions which centred around "PIPPA," a reactor project study which proved to be the forerunner of the Calder Hall nuclear power station. At Calder Hall his firm, C. A. Parsons and Co., Ltd., was responsible for supplying all the generating plant, gas circulators and ductwork. Similar plant was later installed at the Chapelcross nuclear power station.

Sir Claude was a prime mover in the formation of the Nuclear Power Plant Company, Ltd., a consortium of eight firms which collaborate in the construction of complete nuclear power stations. This company, under its founder chairman, Sir Claude, contracted to build one of the first three commercial nuclear power stations in this country, at Bradwell, Essex. The order for this 300MW station was placed in 1957, and commercial production of electricity is expected to begin in 1960-61.

In the meantime it had become apparent with the publication of the British nuclear power station programme in 1956 that progress, initially at any rate, depended on the use of graphite as the moderator in the reactor core. To increase the supplies of high density graphite Sir Claude was instrumental in forming a new company, the Anglo-Great Lakes Corporation, Ltd. Within seventeen months of starting work on the building of a factory on a site adjoining Stella North power station, samples of graphite were being made and the designed production capacity of this factory is 10,000 tons of nuclear graphite a year.

In the last few years of his life much of Sir Claude's energy was devoted to the export of nuclear reactors. He soon appreciated that the opportunities for complete "turnkey" contracts overseas were limited but that there was a good deal of scope for the export of "know-how" to countries that had enough technical ability to collaborate in the building of nuclear power stations. The first fruit of this concept was the conclusion of a long-term agreement, signed last year by Sir Claude as chairman of the Nuclear Power Plant Company, Ltd., and Sr. Enrico Mattei president of A.G.I.P. Nucleare, to collaborate in the building of nuclear power stations in Italy. In particular a contract was made to build the Latina power station near Rome - the first export contract for a nuclear power station anywhere in the world.

This record of Sir Claude's achievements in the fields of electrical and nuclear engineering emphasises the valuable contribution which he made to the work of hi company during his thirty-five years of service with it.

But his work was by no means limited to the affairs of his company. By his articles to the technical press - THE ENGINEER has had the privilege of printing a number of them - by papers and lectures to engineering institutions and other learned societies, and by his keen interest in technical education, Sir Claude has made a classic contribution to the advancement of scientific knowledge. His papers to learned societies in this country and overseas covered a variety of subjects including steam turbines, generators, gas turbines, fuel usage and nuclear power.

One of his earliest contributions to the proceedings of the Institution of Mechanical Engineers was a paper, in 1934, entitled "The Evolution of Design," and one of outstanding value was that, presented in 1955, on "The Failure of two lOOMW Turbo-Generators." This paper described in detail investigations which were made following the failure of two generators installed in the Richard L. Hearn station at Toronto. In presenting that paper, Sir Claude characteristically said that often "progress is made by solving the problems resulting from the making of progress." Another of Sir Claude's contribution to the "Mechanicals" was the Parsons Memorial Lecture in 1947 which he appropriately entitled "Parsons: The Man and His Work." Sir Claude was at all times ready to acknowledge the benefit that he had derived from the work and inspiration of others. Of himself and his philosophy he once said, for example, "I have had three heroes in my life. Professor Sir Robert Chapman, a great teacher; Sir Charles Parsons, a great engineer; Engineer Vice-Admiral Sir Harold Brown, my war boss, engineering chief of the Fleet and Director-General of Munitions Production, who built the superstructure of the rearmament drive, a great man. I was assistant to these three men and they all had a profound effect on my make-up and approach to life. The first taught me clarity of thought as a prime essential; the second taught me what engineering genius and hard work can do for mankind; the third taught me that leadership and loyalty to your staff are perhaps in the end the greatest contribution to life a man can make."

Sir Claude was elected a Fellow of the Royal Society in 1946, and a vice-president in 1957; he also received honorary degrees of Doctor of Science (Engineering) in the University of London, and Doctor of Science in the University of Durham. He became an Associate Member of the Institution of Mechanical Engineers in 1926 and was transferred to full membership in 1929. For twenty-two years, Sir Claude served on the Institution's council and for eight of them as a vice-president. But the pressure of his many duties prevented him from accepting nomination as president. We have already mentioned some of the papers which he presented to the "Mechanicals," and on two occasions, in 1932 and again in 1956, be was awarded the Thomas Hawksley gold medal.

It is tragic that so great a man as Sir Claude Gibb should have died at what must nowadays be regarded as a comparatively early age. Yet it could be foreseen that he would die comparatively young. For consistently over the years Sir Claude overworked. His intensely active and interested mind refused his body adequate rest; and he packed into a lifetime shorter than that of most other men far more experience than most men acquire. Sir Claude's was a forceful personality. But there was nothing unpleasant about his forcefulness. He knew his own mind; he had discovered by experience that his intelligence and his judgment were of very high quality; he had faith therefore in his own ideas and he was ready to fight hard (particularly with a persuasive tongue) to get them adopted. But he held in high regard courageous opponents and all who honestly held and boldly expressed opinions different from his own. Moreover he had the faculty of suggesting to almost all those he met that he liked them and wanted to talk with them. He could, indeed, talk easily with all and sundry. This charm of manner softened his forcefulness; in his later years it made him as admirable in negotiation as earlier he had been brilliant academically inspired practically and outstanding as a leader of men.

Britain and the Commonwealth by Sir Claude's death have lost suddenly a very great man. Yet those who knew Sir Claude, once they have got over the shock of learning of his sudden death, will we think realise that it was not surprising. For that his death should be sudden and relatively early was an almost inevitable outcome of his character. Nor would Sir Claude have had it otherwise. Indeed, we cannot believe that he would have tolerated with patience the growing physical weakness that comes with increasing age nor any suspicion that his intellectual ability might be failing him. Sir Claude would never, in fact, have fitted into the conception of a man enjoying a serene old age. It will be a particular satisfaction to everyone that he lived just long enough to have bestowed upon him the highest award that the Institution of Mechanical Engineers can confer, the James Watt International Medal. It was to have been actually presented to him to-night at a meeting of that Institution. Sadly he lived not quite long enough personally to receive it. Arrangements are being made for Lady Gibb to receive it.