May 1901. The Queen's Electric Carriage. 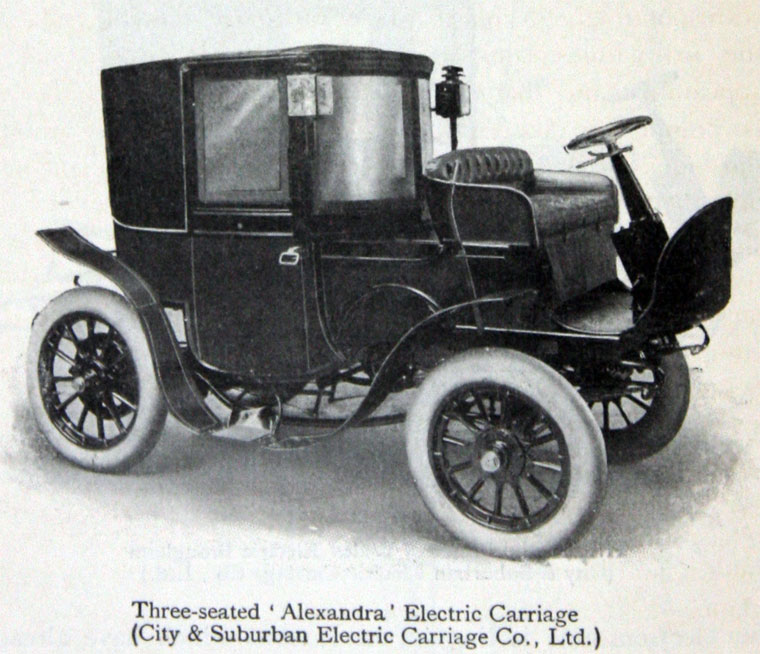 1901-1905 Produced electric vehicles based on the American Columbia

1904 Paris E. Singer was head of the company

The Queen's electric carriage is a victoriette seated for two persons. It is upholstered in dark green morocco, with folding hood of polished grain leather, lined with dark green cloth. The side panels are, as will be seen from the illustration, very gracefully curved, and the front dash is also curved, and of patent leather, as on the wings.

The colour of the car panelling is rose madder lake, the remainder of the body being black, picked out with deep red lines.

The carriage has 28in. bicycle pattern wheels, with 3in. pneumatics, and weighs, together with the battery, about 12 cwt.

The capacity of the battery is forty miles on the one charge, and a speed of twenty miles an hour can be attained.

We understand that Her Majesty is in the habit of driving the vehicle herself, and is delighted with the ease and simplicity of control and manipulation.

The carriage was supplied to H.M. by the City and Suburban Electric Carriage Co., of 6, Denman Street, Piccadilly Circus, who also have a number of orders in hand from members of the nobility of both sexes.

The depot of the company is very central, and consists of a new building of seven floors, having a total area of 19,000 square feet, with accommodation for over a hundred carriages. The firm not only supply the carriages, but undertake for a fixed sum per annum to keep them in full going order, charge batteries, and, if desired to do so, they also send out a driver with each car. All the owner has to do when he or she wants the electromobile is to telephone to Denman Street, and in a few minutes it will arrive ready for work in the charge of a competent driver.