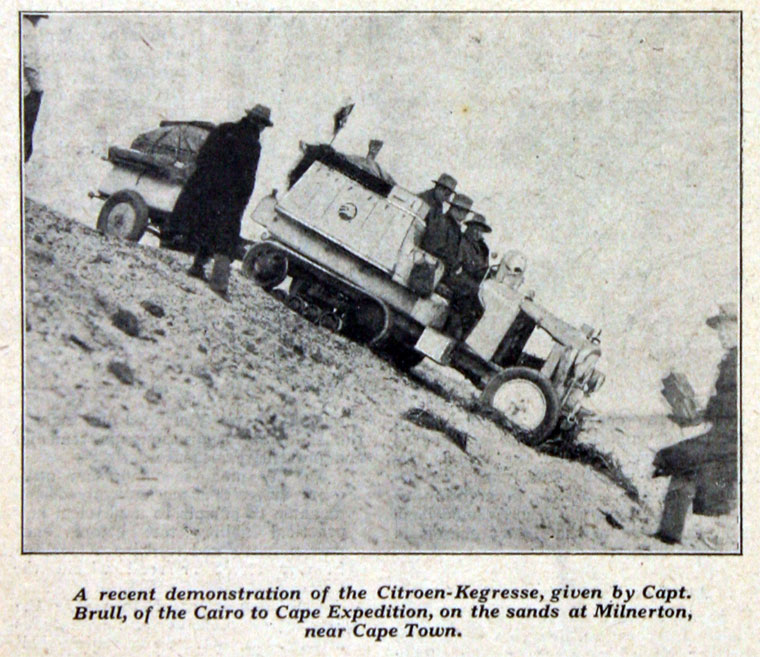 September 1925. A demo of the Kegresse tracks by Captain Brull.

1913 The Kegresse half-track system for vehicles was invented by a French engineer, Adolphe Kegresse, working for the Czar in Russia as a means of propelling vehicles in snowy conditions[1]

1920 The Kegresse system was shown to Andre Citroen who immediately obtained sole rights and made facilities available to the inventor. Citroen then developed light half-track cars

Presumably the Citroen-Kegresse Company was established as a British subsidiary

1923 The Citroen-Kegresse Company carried out preliminary experiments on behalf of the Royal National Lifeboat Institution with one of its special 10HP cars. The company at this point intended to continue its experiments in hope that the Kegresse track, which was fitted to these cars can be made suitable for launching heavy lifeboats off the different kinds of beach around the coasts.[2]

Late 1920s: the U.S. Army purchased several Citroën-Kégresse vehicles for evaluation followed by a licence to produce them. This resulted in the Army Ordnance Department building a prototype in 1939.

1940 September: The US Army vehicle went into production as the M2 and M3 half-track versions. The United States eventually produced more than 41,000 vehicles in over 70 versions between 1940 and 1944.[3]