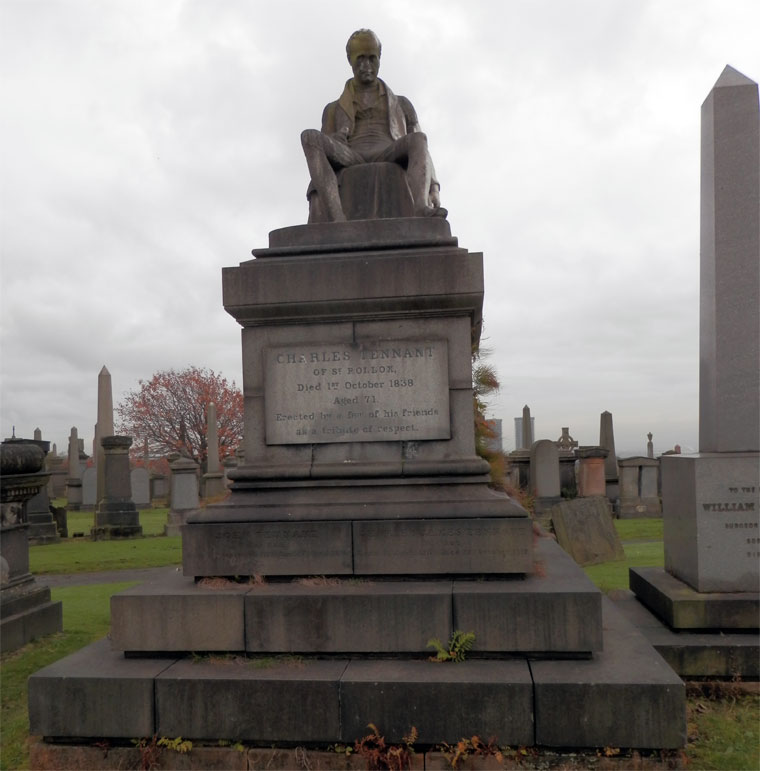 1768 May 3rd. Born at Laigh Corton, Alloway, Ayrshire to John Tennant (1725-1810) and his second wife Margaret McClure (1738-1784). They moved to Glenconner, Ochiltree, Ayrshire, shortly afterwards and Tennant attended Ochiltree parish school. After leaving school, he was apprenticed as a weaver.

An important aspect of the weaving industry was bleaching cloth. At that time this involved boiling the cloth in weak alkali (stale urine) and leaving the cloth exposed to sunlight for many months in, so called, bleaching fields. After completing his apprenticeship, and studying bleaching methods at Wellmeadow, he started his own bleach field at Darnley near Barrhead, Renfrewshire about 1788 with a friend from Paisley. These fields were adjacent to the family home of his future wife.

1788 he tried the use of milk of lime for bleaching in place of raw lime, which was too damaging to the cloth[1].

1795 Tennant married Margaret Wilson (1766-1843) the daughter of William Wilson and Margaret Penman. Margaret Wilson was from a prominent family from whom Tennant received assistance for his rapidly expanding business. Between 1796 and 1810 they had ten children, several of whom also became prominent figures including John Tennant (1796-1878), named after Charles's father.

1797 With 4 partners Tennant expanded his business by establishing a works at St Rollox, Glasgow. His partners were James Knox, Alexander Dunlop (a relative by marriage), Dr William Couper and Charles Macintosh. The chemical works at St. Rollox soon grew to be the largest chemical works in the world.

1798 Tennant took out a patent for a bleach liquor formed by passing chlorine gas into a mixture of lime and water. This product had the advantage of being cheaper than the one generally used at the time because it substituted lime for potash.

1799 Tennant's great discovery was bleaching powder (chloride of lime) for which he took out a patent in 1799. The process involved reacting chlorine gas and dry slaked lime to form bleaching powder, a mixture comprised of calcium hypochlorite and other derivatives. It seems Macintosh also played a significant role in this discovery and remained one of Tennant's associates for many years.

By 1800 Tennant secured financial control of the St Rollox works. Its principal product was bleaching powder, which was sold worldwide. The works had a tall chimney known as Tennant's Stalk that was a well-known landmark in Glasgow, not being demolished until the 1920s.

1802 Tennant took action against a Lancashire firm for infringement of his patent (presumably this was the first patent, on slaked lime) but the patent was declared void as lime had been used for bleaching prior to his patenting[2].

1806 Charles Tennant was one of the founders of the Glasgow Water Works.

1811 Charles Tennant and Co of St Rollox established an associated company, C. Tennant Sons and Co Ltd, in Upper Thames St, London, as "bleaching powder manufacturers"; in 1815 the term "and drysalters" was added to the description. This business has continued operation to the present day.

By 1815 Charles Tennant and Co had expanded into other chemicals, metallurgy and explosives. The early rail network in Scotland and important mines in Spain were also areas in which it had interests.

1825 Started production of soda ash by the Leblanc process at St Rollox.

1830 Charles Tennant of St. Rollox, manufacturing chemist, became a member of the Institution of Civil Engineers.[3]

Between 1830-38, a works was established at Carnoustie for making sulphuric acid and "artificial manures".

1835 St Rollox was said to be the "the most important chemical works in the world"; it covered 100 acres.

He is buried in Glasgow Necropolis cemetery where his monument is in the form of a seated figure, the sculpture is by Patrick Park (1811-1855). The mighty business empire Tennant founded and the immense wealth generated allowed many of his descendants to marry into the British aristocracy, his grandson Charles Clow Tennant (1823-1906) becoming 1st baronet.

In 1890 the chemical business Charles Tennant and Partners Ltd was absorbed by United Alkali Co which also purchased the St Rollox works, and the Hebburn and Haverton Hill works. This company merged with others in 1926 to form the chemical giant ICI.

The Institution have to regret the loss, by death, of Mr. Charles Tennant of Glasgow, the eminent practical chemist.

Mr. Tennant was born at Glenconna in Ayrshire, in 1767, and commenced his career as an improver in the chemical arts before the end of the last century. The great revolution in the practice of bleaching, which then occurred, was carried out by the discoveries made by him, first of the Solution of Chloride of Lime, and afterwards of the dry Chloride of Lime, or bleaching powder - an inestimable gift to the arts with which the name of Mr. Tennant will always be associated.

The chemical works of St. Rollox near Glasgow, which now form so conspicuous a monument of his energy and success, were erected for the purpose of manufacturing this article, for which he held the patent.

The manufacture of Sulphuric Acid, and of Alkali from Salt, was also greatly improved at St. Rollox, and first conducted there on a scale commensurate with their national importance. The manufacturing interests of this country possess an advantage in the extraordinary cheapness of these and other chemical products, which they owe in a great degree to Mr. Tennant’s scientific talents and activity as a manufacturer.

The arts are deeply indebted to Mr. Tennant for other benefits, particularly for his exertions in removing the duty on salt. This he ultimately succeeded in accomplishing, after a struggle of many years with the Kelp proprietors. Few legislative enactments have been so beneficial to the country, as well attested by the rapid increase of alkali manufactories.

For some years past Mr. Tennant left the chief management of his manufacturing affairs to his Sons, and devoted a great portion of his energetic mind to the welfare of his fellow-citizens, among whom he was considered a leader in every philanthropic undertaking,

The success of railway undertakings occupied latterly much of his time and attention; the last great struggle in which he was engaged, was in favour of the Edinburgh and Glasgow line; the passing of the bill for which, he had the happiness to live to see.

He died at his house in Glasgow on the 1st of October, aged 71, and has left a name which will long continue to be extensively known and associated with practical science.