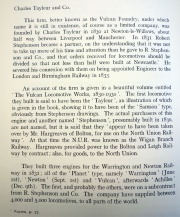 History of the business.

Charles Tayleur and Company of Vulcan Foundry near Warrington.

Charles Tayleur was a merchant in Liverpool with a counting house in Wolstenholm Square, Liverpool.

1830 Charles Tayleur established the Vulcan Works as a general engineering works to supply all the equipment required for a railway. Robert Stephenson was a member of the firm from an early date but retired (1835) on being appointed to the London and Birmingham Railway[1]

1832 The Foundry was opened as Charles Tayleur and Co to produce girders for bridges, switches and crossings, and other ironwork following the opening of the Liverpool and Manchester Railway - because of the distance from the locomotive works in Newcastle-upon-Tyne, it seemed preferable to build and support them locally. In 1832, Robert Stephenson became a partner for a few years.

The first two locomotives, 0-4-0 Tayleur and Stephenson, built for the North Union Railway, were similar to Stephenson's Samson design. The next locomotives were three 2-2-0s of a later Planet type for the Warrington and Newton Railway. Other early orders came from the Leicester and Swannington Railway and the Birmingham and Derby Junction Railway.

There were then some 4-2-0s for America which were possibly the first British bogie locomotives, though there is no record of how, or whether, these were pivoted.

From 1835 the company was selling to France, Austria and Russia, the beginnings of an export trade which was maintained throughout the life of the company. The company's locomotives had a strong Stephenson influence, many during the following decade being of the "long boiler" design.

1844 Expiry of the Partnership lately carried on at Liverpool, under the firm of C. Tayleur, Son, and Co. when Mr. Wm. H. Tayleur and Mr. F. Pennington retired. The debts due to and by the late partnership will be received and paid by the remaining partners, C. Tayleur, William Bates, Dennis Madden, who, in conjunction with Mr. Charles William Claude, will continue the business[6]

1847 George Samuel Sanderson entered into partnership with Charles and Edward Tayleur; they opened a foundry at Bank Quay, Warrington.[7]

1847 The company had become The Vulcan Foundry Company.

Historically the Vulcan Works at Newton-le-Willows is one of the most interesting of the group of locomotive building establishments in this country. The founder was Charles Tayleur, with whom was associated at some time or other men whose names have helped to make locomotive history. The first and most prominent among them was Robert Stephenson, who subsequently retired from the firm to take up the appointment of engineer-in-chief to the London and Birmingham Railway. There is some uncertainty about the exact date when the original works were erected, but it seems probable that building operations were begun in 1830 and that the works were completed in 1832. It was not very long before the senior Tayleur handed over the control of the establishment to his son, who was also named Charles, and when the latter’s health failed the management devolved upon a third member of the family – Mr Henry T. Tayleur.