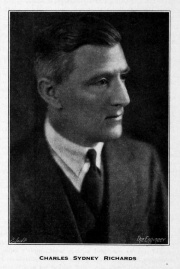 CHARLES SYDNEY RICHARDS died at Rio de Janeiro on January 28th, 1941. The cabled news tells us that he was drowned whilst bathing at Copacabana Beach. British foreign trade is thus deprived of the services of one of its more brilliant exponents and the country loses a man of outstanding ability and wide experience.

Richards was born in 1884 and joined the Metropolitan-Vickers Electrical Company (then the British Westinghouse Company) in 1902. He had studied at the Manchester School of Technology and had already taken a First Class Honours Science Degree in the University of Manchester. For thirty-eight years he served his company and took no small share in building it up to its present worldwide standing. During the 1914-1918 war he saw active service as Captain in the Army.

Richards' career is a record of pioneer work. He had a flair for opening up and making a success of new and often apparently unpromising export markets. His overseas experience began at the age of twenty-eight, when he first went to Russia, a visit repeated many times in subsequent years. He assisted in laying the foundations of British electrical export trade with that country before the last war, and in later years after the Russian Revolution he achieved conspicuous success in large-scale development of this trade. In matters dealing with the Russian market he was recognised as an expert. In 1922 he was appointed joint managing director of the Metropolitan-Vickers Export Company, and at this period, as a result of his visits to China and Japan, the Far East became an important territory for his company. His elevation to the board of the Metropolitan-Vickers Electrical Company in 1933 did not restrict his overseas activities. In more recent years he devoted much of his time to European and Near Eastern markets and was one of those mainly responsible for developing trade with Poland and Turkey. He was always convinced of the importance of the Latin American markets, and in October, 1940, was appointed to represent the electrical industry on Lord Willingdon's Mission to South America.

His systematic visits to export territories in which he was interested, provided a key to his expert knowledge of how to compete successfully with foreign industry and to put Britain "on the map" as an exporter of electrical machinerv. Richards' mind was always focused on the national aspect and his advice was always at the service of British industry on matters of export trade, in which he was a recognised expert.

He was a born diplomat and had the rare gift of never failing to understand and appreciate the views of others. This contributed in no small measure to his exceptional negotiating ability and helped to make a success of his dealings with men of all nations. Amongst Richards' many qualities it may have been his adventurous spirit and courageous outlook which earned for him the admiration of a very large circle of friends at home and abroad. His fine character, his personal charm, his cheery optimism and his unaffected manner endeared him to many who will long cherish the memory of his friendship. He will be greatly missed by his colleagues, who held him in deep respect and by his staff, to whom he showed unfailing kindness and whose warm affection for him will endure.