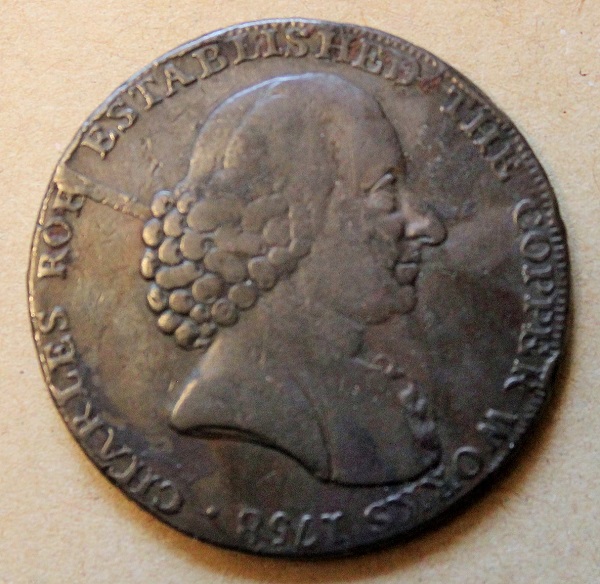 1723 On the death of his father, Roe moved to Stockport with his family.

At some time after his mother's death in November 1724 he appears to have settled in Macclesfield with his sister Mary and elder brother William, who was appointed curate of the parochial chapel there from that year.

Involved in the local button and twist trade.

1742 Became a freeman of Macclesfield

1756 Started mines at Coniston in the Lake District and at Alderley Edge, near Macclesfield. Traded as Charles Roe and Copper Co.

1758 Gained permission to build a copper smelter on Macclesfield Common

Entered into a lifelong partnership with Brian Hodgson, innkeeper of the Old Hall, Buxton, who held coal-mining interests at Disley.

The company was a great success, building rolling mills for copper sheets and a brass-wire mill at Havannah, in Eaton, near Congleton, in 1763, followed by brass battery and rolling mills at Bosley, south of Macclesfield, in 1766.

Large quantities of copper ores were initially bought from the duke of Devonshire's mine at Ecton Hill in Staffordshire, but mining operations were extended to Penrhyn-Du in north Wales during 1763 and Parys Mountain on Anglesey in 1764.

1764 he withdrew from the silk trade because of his increasing involvement with the copper trade.

1765 Started to buy ore from Cornwall

1767 Supported by John Walker of Liverpool, he built a copper smelter on Liverpool's south shore.

1774 a new partnership with the additional name the Macclesfield Copper Company was created, comprising Roe, Brian Hodgson, and thirteen other partners.

1781 Roe died at his home in Macclesfield.