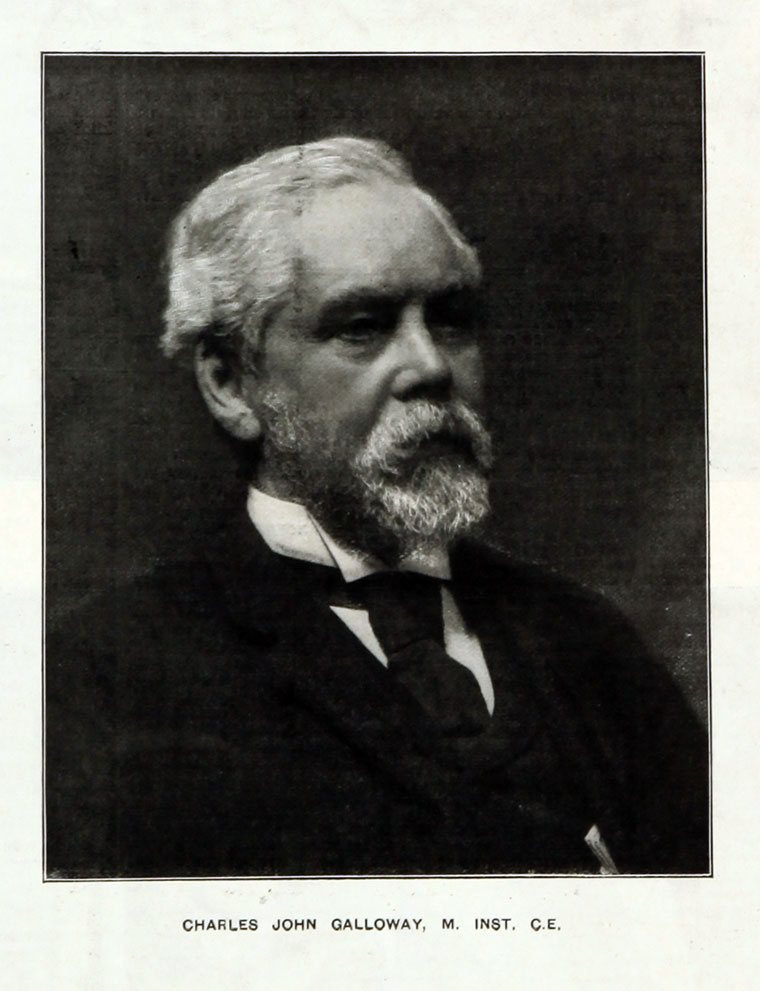 1863 Director of the Blackpool Land, Building and Hotel Co [1] and of Victoria Pier and Promenade Hotel Co, Southport [2]

1915 Death of his only surviving son Major Harold Bessemer Galloway who was killed in France.[5]

CHARLES JOHN GALLOWAY was born in Manchester on 25th April 1833.

He served his apprenticeship from 1846 to 1851 with his father and uncle, Messrs. W. and J. Galloway, of Knott Mill Iron Works, Manchester; and became a partner in the firm in 1856.

On its conversion into a company in 1889 he was elected chairman, a position which he occupied up to the time of his death.

During his career he superintended the erection of the Furness Railway Viaduct over the Ulverston Sands, also the erection of Southport Pier, and devoted much time and attention to the development and improvement of the Galloway boiler.

He took great interest in the International Exhibition of Paris in 1878, and for his services in connection therewith he was made a Chevalier of the Legion of Honour; and on the occasion of the Exhibition in 1889 he was promoted to the rank of Officer of the same Order. He was also vice-chairman of the 1887 Manchester Jubilee Exhibition.

He held numerous directorships in various industrial companies, including that of the Manchester Ship Canal, and he was chairman of the Vulcan Insurance Co.

He was a Justice of the Peace for the City of Manchester, and for the County of Cheshire.

His death took place suddenly at his residence in Knutsford, on 13th March 1904, in his seventy-first year.

He became a Member of this Institution in 1866.

On the formation of the firm into a limited company in 1889 he was appointed Chairman, which position he occupied up to the time of his death. Mr. Galloway was also Chairman of the Vulcan Boiler Insurance Co, a Director of Brunner, Mond and Co, the Carnforth Iron Co and the Manchester Ship Canal Company, and a member of the Manchester Board of the Commercial Union Assurance Co and of the Mond Nickel Co.

At the commencement of the volunteer movement he took an active interest in it, eventually retiring with the rank of Captain in the 40th Lancashire (3rd Manchester) Rifle Volunteers, now the 4th Volunteer Battalion Manchester Regiment.

He was Vice-chairman of the Manchester Jubilee Exhibition in 1887.

Mr. Galloway had a collection of valuable pictures, including fine examples of G. F. Watts, R.A., E. J. Gregory, R.A., G. Clausen, and other artists. He was a Magistrate for the City of Manchester and for the County of Chester.

He died at his residence, Thorneyholme, Knutsford, Cheshire, on the 14th March, 1904, in his seventy-first year.

Mr. Galloway was elected a Member of the Institution on the 2nd March, 1886.

"...death of Mr. Charles John Galloway, who for over half a century not only occupied a prominent position in the engineering trades of Lancashire, but who was well known and highly appreciated throughout the engineering profession both in England and on the Continent. Mr. Galloway, who was born in 1833, was, on leaving school, apprenticed to his father and uncle, who carried on the business of engineers in the name of Messrs. W. and J. Galloway. He became a partner in 1856, and subsequently was associated with all the great undertakings of the firm. Mr. Galloway had considerable experience..."[More].

CHARLES JOHN GALLOWAY died on March 14, 1904, at Knutsford, aged . seventy-one. He was for many years an active member of Galloways, Limited, boilermakers and engineers of Manchester. He had the entire superintendence of the construction of the viaduct carrying the Furness Railway across Ulverston Sands, which at the time was considered an engineering feat of magnitude and daring. He took great interest in various international exhibitions, and was consulted by Sir Philip Cunliffe Owen about the arrangement of machinery in the British section of the Paris Exhibition of 1878. In recognition of his services he was made a Knight of the Legion of Honour. After the Paris Exhibition of 1899, with which he was also connected, he became an officer of that Order. He took part in the origination and management of the Manchester Royal Jubilee Exhibition of 1887. In the preceding year he joined the ship-canal movement, and shortly afterwards became a director of the company, retaining that position until his death. He was chairman of the Vulcan Boiler and General Insurance Co., Ltd., and a director of Brunner, Mond, & Co., Ltd., the Carnforth Haematite Iron Co., Ltd., the Commercial Union Co., Ltd., and the Mond Nickel Co., Ltd. He was possessed of great artistic taste, and was a liberal patron of the fine arts. He was a Justice of the Peace for Manchester and for the county of Chester.