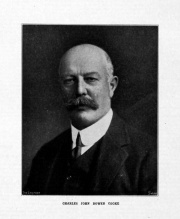 CHARLES JOHN BOWEN COOKE, C.B.E., was born near Peterborough, on 11th January 1859, and was educated at the Preparatory School, Cheltenham, and King's College School, London, and later on the Continent.

Mr. Cooke was responsible for the introduction of mechanical coaling and ash-handling plants on British Railways; also of 4-cylinder simple locomotives on the L. and N. W. Railway, and many new classes of engines, of which probably the most famous is the "Sir Gilbert Claughton" class, brought out in 1913.

At Crewe a type of tractor was developed out of a Ford car, armoured trains were built, a great deal of forged and other work turned out in addition to small material, overhead cranes, rails, etc. He served on several Committees connected with the Railway Executive Committee, the Ministry of Munitions, and Ministry of Transport. He paid several visits to France during the War in connexion with the working of the military railways, and visited America in 1917 to purchase material for British Railways.

Besides numerous articles on railway engineering subjects, he wrote several books on locomotives which were accepted as standard works, and played an important part in the training of students. He was Mayor of Crewe during 1918-19, and served on the Cheshire County Council. He was also a Justice of the Peace, and Major in the Engineer and Railway Staff Corps, R.E. (T.F.). Early in 1918 the King conferred upon Mr. Cooke the Commandership of the British Empire in recognition of his services to the country.

His death took place at Falmouth on 18th October 1920, in his sixty-second year.