Grace's Guide is the leading source of historical information on industry and manufacturing in Britain. This web publication contains 142,981 pages of information and 229,147 images on early companies, their products and the people who designed and built them. 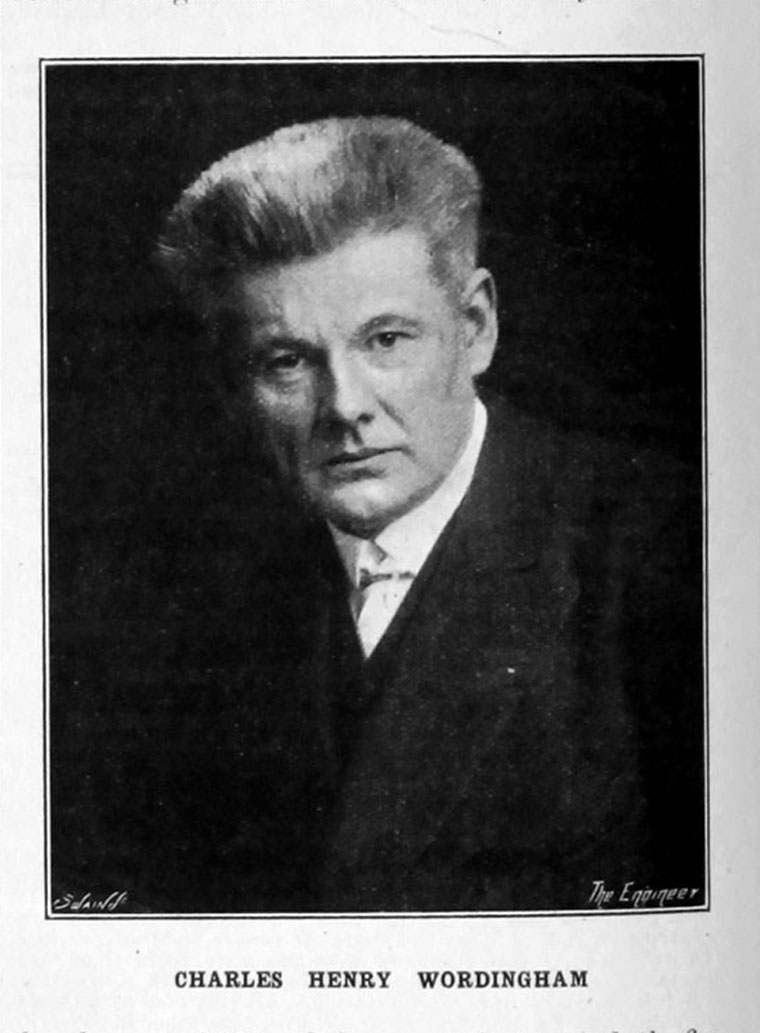 CHARLES HENRY WORDINGHAM, C.B.E., was born on 14th April 1866, and received his education in King's College School, London, followed by three years, 1882-5, in the Engineering and Applied Sciences department of King's College.

On leaving college he was articled to Dr. John Hopkinson, F.R.S., and then, after spending a year or more with the United Telephone Co., he was appointed in 1889 Assistant Engineer at the Grosvenor Gallery generating station of the London Electric Supply Corporation, and subsequently became chief of their standardizing department and engineer in charge of their distributing sub-stations.

Two years later he went to the Admiralty, as head of the Naval Electrical Department, to become responsible for the electrical equipment of all His Majesty's ships and for advising on electric light and power questions in the dockyards and other naval shore establishments, including Rosyth and the naval air stations. On his retirement from this position soon after the Armistice in 1918, he was awarded the C.B.E., and he resumed his consulting practice, becoming interested in large power supply schemes for Greater London and the Midlands.

Mr. Wordingham was a keen supporter of his old college (King's College, London), becoming an Associate, Fellow, and Member of its Council and Delegacy, and also for several years he acted as President of its Old Students' Association. He was a member of the Main Committee of the British Engineering Standards Association, besides being Chairman of the Electrical Section Committee and one of the British representatives on the International Electro-Technical Commission.

Mr. Wordingham died on 28th January 1925, at Redhill, in the fifty-ninth year of his age.

His friends in the Institution who had for some time taken a grave view of his illness, and the electrical world who were taken by surprise, heard with the deepest sorrow that Wordingham, a household name to all, had passed away.

Born at Twickenham on the 14th April, 1866, his father being a medical man, he was educated at King's College School, and in 1882 entered the Engineering Department of King's College, London. Here he distinguished himself, being, as he always was, an indefatigable worker and throwing himself into not only the class- room and laboratory work, but also the social activities of the College. He was at one time secretary, and later president, of the King's College Engineering Society. He never lost his interest in "King's," and at the time of his death was on the council and delegacy of the College and president of the Old Students' Association.

On leaving King's College he was articled to the late Dr. John Hopkinson, F.R.S., and subsequently was with the United Telephone Co.; but in 1889 he may be considered to have made his entry into the branch of the profession in which his future career was to lie, for in that year he became third engineer at the Grosvenor Gallery generating station of the London Electric Supply Corporation, in charge of the standardization department and the distribution substations. Perhaps it was here that his mind turned to standardization, a subject in which he eventually took so prominent a part.

In 1892 he joined Dr. John Hopkinson as assistant, and it was in this capacity that he was engaged on the first lighting station of the Manchester Corporation. On the completion of the contract in 1894 he became the first City Electrical Engineer to the Manchester Corporation, a post which he held until 1901, during which time great developments took place. Before he left, his plan for a new combined tramway, and lighting station with high-tension distribution was completed and was subsequently carried out by the Corporation.

In 1901 he left the Manchester Corporation and became a consulting engineer, carrying out certain Parliamentary work and work connected with company and municipal power and lighting schemes.

In 1903 he was appointed Head of the Electrical Engineering Department of the Admiralty, in which capacity he reorganized the electrical equipment of the Navy. It was no doubt his experience gained in electrical distribution on land that led him to adopt lead-covered paper-insulated cables for the principal mains on the larger ships. He introduced many entirely new features into the equipment and, no doubt, in some cases met with considerable opposition to his strong views.

Two matters outside his direct professional work were always in his mind. Standardization in the electrical world may almost be said to be his work. He was the driving force behind nearly every section of this work, and as a collateral activity was chairman of the Ship Electrical Equipment Committee of the Institution, and at the time of his death was also chairman of its Wiring Rules Committee. Another project at which he worked with great energy, arising from a need he had felt when he was with the Manchester Corporation, was a scheme for a Proving House to which appliances and material could be submitted to be tested as to their compliance with specified requirements. This scheme has not yet matured.

His connection, with the Institution was a long one: he became an Associate in 1887, and a Member in 1894. He worked actively during the time he was in Manchester to strengthen the Institution in the provincial centres, and was Chairman, of the Manchester Local Section, now the North-Western Centre, in 1901. He served on the Council from 1897 to 1902, from 1905 to 1908, and from 1909 to 1912; became Vice-President in 1914, was elected President in 1917 during the war period, and was re-elected President in 1918. His Presidential Address in, 1917 outlined a scheme for the organization of the whole electrical profession and industry, and much that he then advocated has since been carried out. It was during this period that in the year 1918 he was created C.B.E., when he retired from the Admiralty and again became a consulting engineer, and he was still in practice at the time of his death.

He married in 1912 Emily Anne, daughter of the late Charles John West, J.P., of Queensland, and his wife and five children survive him.

His work at the institution can be fully appreciated only by those on the Council and Committees of that body. No task was too great for the Institution he loved so well, and much of the great Great success and prosperity of the Institution of later years may be traced to his work. He advocated and prepared the way for the granting of the Charter by H.M. the King in 1921. Of the man much might be written. In intellectual qualities he won through by sheer hard work rather than by brilliance; he studied every side of a question, and so prepared, for himself the elements of every problem, and then logically developed the result that would follow, thus giving himself that clearness of prevision and foresight which he showed to such purpose. Once having made up his own mind he became an enthusiast to convert every opponent, every waverer. He found it difficult to see other people's point of view - a strength and yet a weakness. Those who worked with him in committee know how much time he spent in trying - often successfully - to convert a whole committee to his view. He occupied his mind little with abstruse questions of science or philosophy; essentially simple in his method of life, intensely practical in organization and management, satisfied with the religious faith of his forefathers, an ardent friend, a helper of younger men, he endeared himself to all. Many will remember his tender affection for his mother, who for many years accompanied him at the functions which he attended. About two years before his death he had a serious breakdown, but he was ill before this happened. The first sign to his friends who knew him well was when, at a dinner of an Association, he made a speech in which he practically despaired of the completion of the work of the Wiring Rules Committee, the first' time he had ever been known to waver on a matter upon which he had set his heart. Possibly the work he undertook during the war had already overtaxed him. After the recovery from this breakdown he returned to his accustomed tasks, but he had lost power and was evidently working under difficulties; his holiday did not refresh him, a second breakdown followed, a long illness borne bravely and hopefully ended more suddenly than anyone expected, leaving to the Institution and his friends a memory that will long shine as an example and an inspiration.