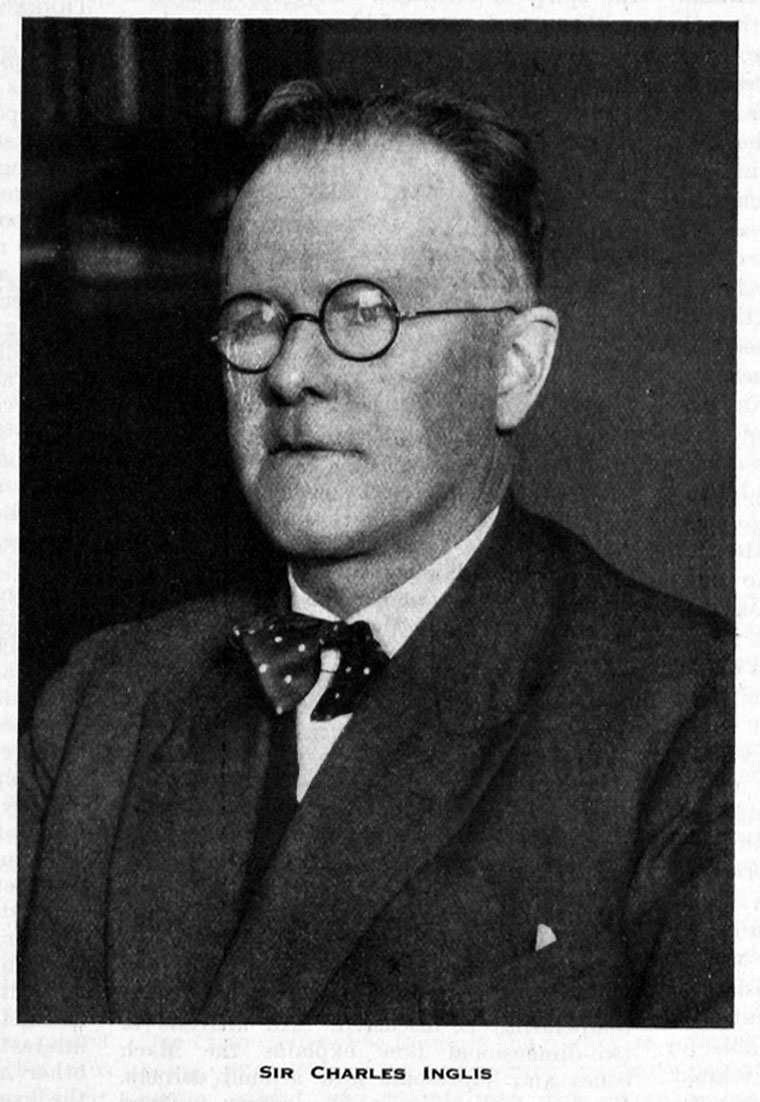 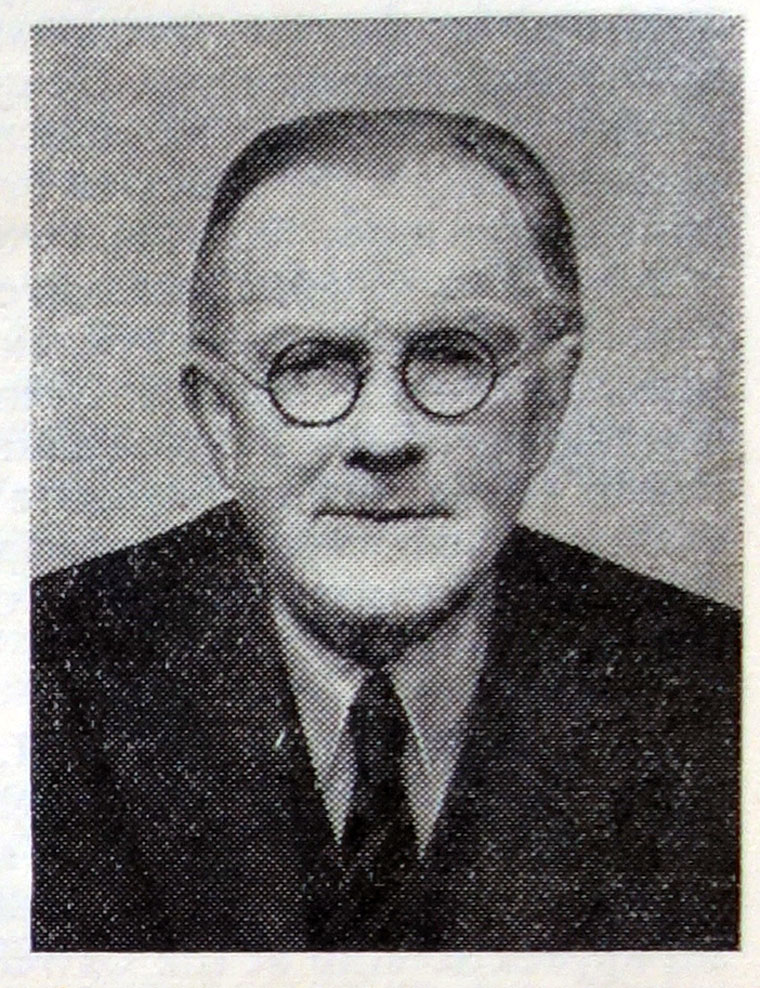 Charles Inglis was the second son of Dr. Alexander Inglis (a general practitioner in Worcester) and his first wife, Florence, the daughter of newspaper proprietor John Frederick Feeney

Knighted in 1945, he spent his later years developing his theories on the education of engineers and wrote a textbook on applied mechanics. He has been described as the greatest teacher of engineering of his time and has a building named in his honour at Cambridge University.

IT is with deep regret that we record the death of Sir Charles Inglis, of 10, Latham Road, Cambridge, which occurred suddenly at Southwold on Saturday last, April 19th.

Sir Charles, who was seventy-six, held a distinguished place in engineering education. He was, for twenty-five years, Professor of Mechanical Sciences at Cambridge University, where he began his teaching career under the late Sir. J. Alfred Ewing in 1901.

Charles Edward Inglis, who was the son of a Doctor of Medicine, was born at Worcester on July 31, 1875.

Ho was educated at Cheltenham College and at King's College, Cambridge, whore he gained a first-class mechanical science tripos in 1898. In the same year he began a pupilage with the late Sir John Wolfe Barry, spending one year in the drawing-office and two years on railway and dock construction work.

During his pupilage Sir Charles took up the study of mechanical vibration, a subject to which he devoted much attention throughout his career. He was awarded a Fellowship of King's College, Cambridge, for a treatise on "Balancing Engines," and in 1901 joined the teaching staff of the University Engineering Department, of which Sir Alfred Ewing was then the head. That was the beginning of an active teaching career that extended over more than forty years. Shortly after his appointment, Sir Charles became university demonstrator and lecturer in mechanical engineering.

Upon the outbreak of the first world war in 1914, Sir Charles took a commission in the Royal Engineers and was for some time engaged as a lecturer at the School of Military Engineering, Chatham. But as the war proceeded he was appointed to take charge of a department of the War Office concerned with the design and supply of military bridges necessary for operations overseas. He was responsible for the invention of the Inglis portable tubular bridge, which was accepted as a standard of sapper equipment, and his work at the War Office included also the design of other structures, such as forts and observation towers. In recognition of his war services, Sir Charles was awarded the O.B.E.

Sir Charles returned to Cambridge University in 1919 and in April of that year was appointed Professor of Engineering or Professor of Mechanical Sciences, as he was later known - a position in which he served until his retirement twenty-five years later. His occupancy of the Chair of Engineering at Cambridge undoubtedly represented the most important part of Sir Charles's work. His first main talk was the reorganisation of the engineering department consequent upon the building of new laboratories and lecture rooms. Instruction in engineering had begun at Cambridge University round about 1890, and although the question of new premises to accommodate the increasing number of students had been seriously considered in 1914, the war put a stop to development.

In 1920, however - a year after Sir Charles's appointment as Professor - work was started on the construction of the buildings now occupied. The now laboratories, which were built on a site extending over 4 acres, were described in detail in THE ENGINEER of October 24, 1924. Inspired by the high standard set by Sir Alfred Ewing, Professor Inglis saw to it that engineering education at Cambridge progressed along sound lines. Some of his ideas and ideals wore conveyed in an address which he delivered to the Institution of Mechanical Engineers on the occasion of its summer meeting in Cambridge in July, 1931. In the course of that address Sir Charles urged that in a university course of engineering, instruction should primarily concentrate on teaching those essentials which, if not acquired at that stage, never would be acquired! Technicalities which would automatically be picked up in a student's subsequent career were useful, he claimed, as stimulating interest, but, apart from that, they were of secondary importance. Education, Sir Charles suggested, did not consist in the memorisation of a number of facts and formulae, useful as they might be when leavened with intelligence. Education at its best, he said, should aim at something much deeper and more lasting, and the good of education was the power of reasoning, and the habit of mind which remained, when all efforts of memorisation had faded into oblivion.

Although his work at Cambridge University always took first place, Sir Charles found time to render valuable service in many other spheres. His wide experience and expert knowledge were called upon by various Government and other public committees of inquiry. He served, for instance, on the committee set up by the Secretary of State for Air to investigate the crash of the airship "R101" in 1930, and, much more recently, he presided over the Railway (London Plan) Committee, which presented a report to the Minister of Transport in 1946, setting out a scheme of railway development best suited to the future needs of the London area.

Valuable contributions to the work of many learned societies were made by Sir Charles. He became an associate member of the Institution of Civil Engineers in 1901 and a full member in 1922. In 1924 he was awarded a Telford Gold Medal by that Institution for a paper on "The Theory of Transverse Oscillations in Girders and its Relation to Liveload and Impact Allowances," and in 1941 - in one of the most difficult periods of the second world war - Sir Charles was elected president of the "Civils." His presidential address, delivered in November, 1941, dealt with "The Education of Engineers."

Another outstanding contribution which Sir Charles made to the Proceedings of the Institution of Civil Engineers was the Trevithick Memorial Lecture, delivered at the bicentenary commemoration of Trevithick's death in April, 1933.

In 1944 - just after his retirement from the Chair of Mechanical Sciences - Sir Charles gave the fiftieth James Forrest Lecture to the Institution of Civil Engineers, which dealt with the cause and prevention of mechanical vibrations. In this lecture Sir Charles presented an excellent survey based on his long experience of the principles involved. The examples discussed included the vibration of turbine blades, the seismograph, torsional oscillations in crankshafts, oscillations induced in railway vehicles by the sleepers and rail joints, vibrations in railway bridge, and oscillations of a non-isochronous spring.

Sir Charles was elected to membership of the Institution of Mechanical Engineers in 1921, and in 1943 was its Thomas Hawksley lecturer, taking as his subject "Gyroscopic Principles and Applications." Honorary membership of the Institution was conferred upon him in that year, and when, in 1947, the Institution celebrated its centenary, it invited Sir Charles to contribute to its programme of special lectures. He spoke then on "Solid Body Mechanics in Relation to Mechanical Engineering."

From 1943 to 1946 Sir Charles was Vice-Provost of King's College, Cambridge, and after his retirement from the Engineering Department at the beginning of 1944 continued with consulting work. His great services to the cause of engineering education were recognised by the Knighthood which he received in the Birthday Honours of 1945.

"Professor SIR CHARLES EDWARD INGLIS, O.B.E., M.A., LL.D.,F.R.S., was born in 1875. He was educated at Cheltenham College, and was latterly a member of the College Council. In 1894 he proceeded with a mathematical scholarship to King's College, Cambridge, and in 1897 was classed twenty-second Wrangler. He was attracted to the engineering school, then developing under Ewing, and obtained first-class honours in the Mechanical Sciences Tripos in the following year. A pupilage under Sir John Wolfe Barry occupied the next three years, partly in the office but also on docks and railway construction. He then returned to Cambridge and became a lecturer in the engineering department under Professor Hopkinson, and a Fellow of King's College, his dissertation "Balancing of Engines" revealing his interests at that time. Sir Charles Inglis has been described as essentially a mathematician but he was much more than that; he was a meticulously neat and ingenious draughtsman for which quality no doubt he owed something to his training under Wolfe Barry. He personally drew out every detail, even of his later bridges in the 1939-45 war. While his own methods were models of elegance, in his later years he never tired of urging the use of mathematics as a tool only, and deplored the introduction of unnecessary elaboration. He found time to continue his professional activities and contributed papers to the Institution of Naval Architects, later being elected to the Council.

From 1914 to 1919 he was commissioned in the Royal Engineers and, doubtless as the consequence of previous development work on portable bridges with the University Officers Training Corps, was placed in charge of the design and supply of military bridges, much of the work being his personal contribution, particularly the jointing of tubular types and the devices for launching : this was a definite incursion into the field of mechanical engineering and was described at the annual meeting of the British Association for the Advancement of Science in 1919. He attained the rank of major and was appointed O.B.E. In 1919 he returned to Cambridge prepared to continue his work as a lecturer, but was persuaded to allow his name to go forward for the chair of Mechanical Sciences, which had become vacant through the death of Professor Hopkinson, and was elected to the post, which he was to occupy for a quarter of a century. The large numbers of post-war students, and a change of site for the whole department, gave scope for his organizing abilities and with the substitution of a steady growth for the initial spate, the engineering school settled down into a form for which Sir Charles Inglis is entitled to the credit, comprising some 600700 students, forty teaching staff, and as many laboratory and workshop assistants. He was soon called upon to use his abilities in a wider sphere, firstly on the Bridge Stress Committee (D.S:I.R.) 1923, and then the inquiry into the loss of the airship "R101", and later, as Chairman of the Railway (London Plan) Committee which issued a very striking report in 1946. His writings during this period were mainly on the subjects of vibrations and the education of engineers. He was also a polished lecturer in much demand on more general matters such as the Trevithick Centenary, the aesthetics of bridges, and so on. Curiously, or perhaps appropriately, his other contributions to this Institution were on applied mechanics. At the outbreak of war in 1939, although on the point of retiring, he continued with even greater responsibilities due to special courses and once again took up the design and construction of bridges, sufficiently large now for tanks or, in certain combinations, even railways : they were ordered in large quantities until superseded. He served on the Council of the Institution of Civil Engineers for many years, and in 1941 was elected President. He was an Hon. LL.D., Edinburgh, elected a Fellow of The Royal Society in 1930, President of the British Waterworks Association 1935, Hon. Member of the Institution in 1943, and in 1945 received the honour of knighthood. He had retired in 1944 and was elected Vice-Provost of King's College, but remained active in consulting and analytical work, even publishing a book in 1951 embodying many of his lecture notes. He died on 19th April 1052. A. L. Bird, M.A.,1Vh.Sc., M.I.Mech.E."