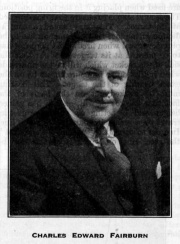 Born in Bradford in 1887, Fairburn won a scholarship to Brasenose College, Oxford University, in 1905, gaining first class honours and being the first graduate to graduate from Oxford's new Engineering School. He then served two years under the tutelage of Henry Fowler at the Midland Railway.

In 1912 Fairburn joined the Siemens Brothers Dynamo Works of Stafford, as a researcher. Between 1913 and 1916 he was assistant to the Resident Engineer on the Shildon-Newport electrification of the North Eastern Railway, being responsible for the design of overhead line electrification equipment and electric locomotives.

Fairburn served as an Experimental Officer in the Royal Flying Corps in the First World War. Afterwards, he joined English Electric Co as head of their railway electrification department.

By 1931 he had risen to Chief Engineering Manager of the Traction Department of EE and had been involved in electrification schemes in forty-nine countries and helped the development of diesel locomotives.

In 1934 Fairburn joined the London, Midland and Scottish Railway (LMS) as Chief Electrical Engineer. In 1938 he was appointed Deputy Chief Mechanical Engineer (CME) under William Stanier. Fairburn was made Acting CME when Stanier was called away on war work in 1942 and was officially made CME on Stanier's retirement in 1944.

During war-time, production of new locomotives was to the proven designs of Stanier, The only locomotive of his brief reign to emerge being that of the LMS Fairburn 2-6-4T, a modified version of the LMS Stanier 2-6-4T.

Fairburn died of a heart attack aged 58 on 12 October 1945. He was succeeded by Henry George Ivatt, another candidate for the job Robert Riddles being promoted to Vice-President at about the same time.

CHARLES EDWARD FAIRBURN, M.A., whose death occurred on 12th October 1945, was the chief mechanical and electrical engineer of the London, Midland and Scottish Railway, and one of the outstanding engineers of his time. During the war of 1939-45 he successfully adapted certain of the company's shops to aircraft construction and repair; some thousands of pairs of fighter aeroplane wings were turned out and hundreds of damaged aircraft were rendered battle-worthy. Moreover, his co-ordination of the shops, leading to the codification of their standard practices, earned him the special thanks of the Board.

He was born in Bradford, in 1887, and received his general education at Bradford Grammar School and at Oxford University, where he had a brilliant academic career. Winning a mathematical scholarship at Brasenose in 1905, he took first classes both in Mathematical Moderations and in the Final Honour School. He was elected to a senior Hulme Exhibition in 1908, and was the first candidate for the new School of Engineering examination, in which he obtained another first class.

After serving three years as a premium pupil, under the late Sir Henry Fowler at the Derby locomotive works, he joined the railway department of Messrs. Siemens dynamo works, and was subsequently appointed assistant to the resident engineer, for whom he was engaged on the erection of the first 1,500 volt overhead line in this country—that between Newport and Shildon, of the North Eastern Railway.

In 1916 he joined the Royal Flying Corps as an experimental officer. Rapidly becoming a skilful pilot, he commanded an experimental squadron and did valuable work in the development of formation and night flying. From 1919 to 1926 he was occupied in organizing a heavy traction department of the English Electric Company, to deal with railway electrification. He then became general manager of the company's Dick Kerr works at Preston, and in the following year took over, in addition, the duties of general manager of the English Electric Company's works at Stafford.

From 1929 to 1931 he was a member of the executive committee of the English Electric Company. In the latter year he was appointed chief engineer. During the above period, Mr. Fairburn was in charge of all the traction engineering of the firm, and was directly concerned with the electrification of forty-nine different railways. His advice was also extensively sought by foreign governments. In 1934 he became chief electrical engineer of the London, Midland and Scottish Railway and four years later was made deputy chief mechanical engineer, with special responsibility for the locomotive and carriage shops. He acted as chief mechanical and electrical engineer from 1942, and his appointment was confirmed in 1944.