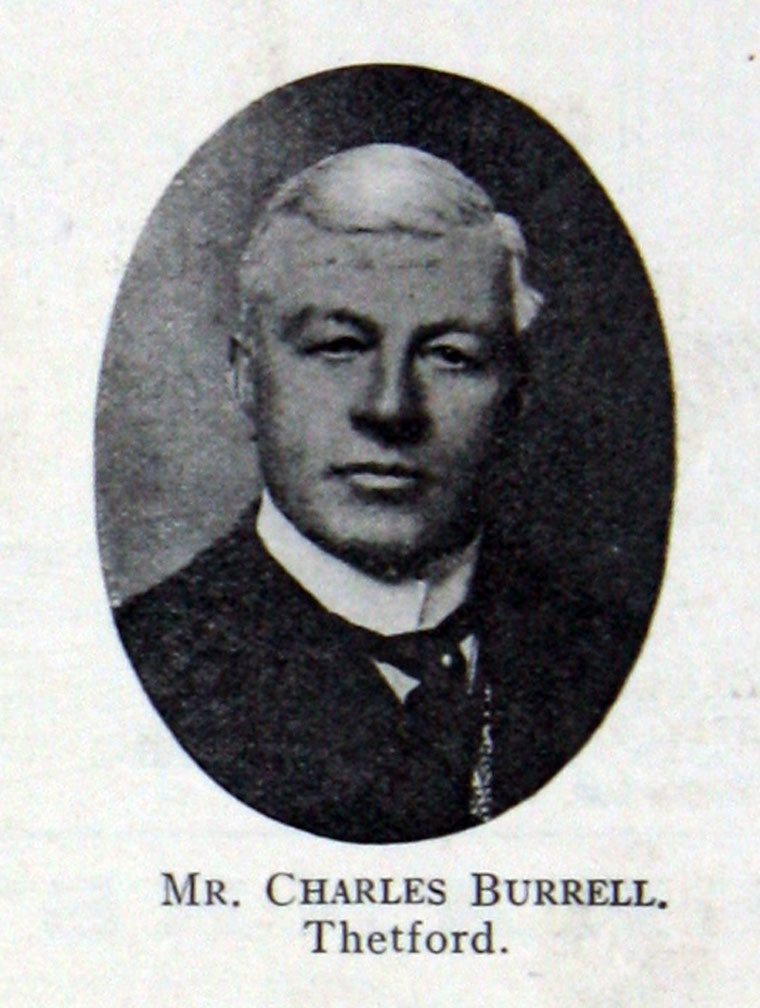 1871 Patent. '3105. To Charles Burrell, of Saint Nicholas Works, Thetford, in the county of Norfolk, and George John Fowell, of the same place, for the invention of "improvements in elastic wheel tyres."'[4]

In 1884 the family business was incorporated as Charles Burrell and Sons. Charles Burrell remained as chairman, though by now he was not so actively engaged in day-to-day management.

1904 He retired completely and was succeeded as chairman of the company in 1904 by his eldest son, Charles Burrell (Junior)

We have to record with regret the death of Mr. Charles Burrell, of Thetford, Norfolk, on June 28th, at the age of eighty-nine years.

The business in which he succeeded his father when he was only nineteen years of age had been founded in 1770, and consisted chiefly or the manufacture of agricultural implements, but under the enterprise of Mr. Burrell it was soon extended to the manufacture of other classes of machinery.

Mr. Burrell may be considered as one of the pioneers of the introduction of thrashing machinery, he having in the year 1848 produced the first successful combined thrashing and dressing machine. It was exhibited at the Royal Agricultural Society's Show at York in that year. At the same time he commenced the manufacture of portable engines.

About the year 1857 Mr. Burrell became interested in self-moving engines, and in the following year he commenced the manufacture of the Boydell traction engine, of which many successful examples were built. These were used not only for ordinary road transport, but also for ploughing and cultivating by direct traction.

Later on, in 1870, he took up the manufacture of the Thompson road steamer, and, in the course of some years' successful experience with it, built engines for many countries.

During all this time the design of traction engines generally had been going through a period of transition, but after this period it seems to have settled into a type which was practically the basis of that now in use. and the firm of Charles Burrell and Sons, which Mr. Burrell founded, has been intimately associated with the production and development of tho modern traction in all its applications.

Mr. Burrell, for some years prior to bis death, had practically retired from the business of his firm, which had been converted into a limited company, and the management of it has been in the hands of his sons.

He was a magistrate of his native town, and in private life he was held in the highest esteem by a very large circle of friends and acquaintances.