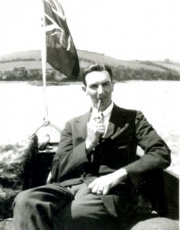 1893 Born in Catford, London, the son of John Calvin Plimpton, an American subject who traded as J. C. Plimpton and Co and his wife Caroline Bird Plimpton

1911 Living at 76 Penkett Road, Liscard, Cheshire with his parents and two siblings [1]

1911-13 He was educated at Liverpool College, after which he attended Birmingham University but failed to graduate.

1933 Applied for a patent for 'An Improved Constructional Building Toy'.

1948 A patent was granted which covered the post war flat roofs, gable roof and a modular roofing system that was never produced.

Lived at 39, Hamilton Road, Wallasey, Cheshire, with his wife and two daughters, Anne and Jean.

"BAYKO" ORIGINATOR. It is with deep regret that we have to record the passing of Mr. C.B. Plimpton, originator of the Bayko plastic building sets. He crossed the border on December 29th last year after a long illness.

The late Mr. Plimpton was the proprietor of the Plimpton Engineering Co. and was one of the first members of the toy trade to use plastics in toy production.

We learnt that arrangements are in hand for the formation of a new company with effect from April 1st, the title of which will be the Plimpton Engineering Co. Ltd. Mrs. Plimpton, to whom we offer our sincere condolences, will be the governing director and the manager of the company. R. J. Cowell will be the managing director.

The new directors will endeavour to continue the known desires of the late Mr. Plimpton in regard to "Bayko," whose keenness for this product was so well known to all who had contact with him.