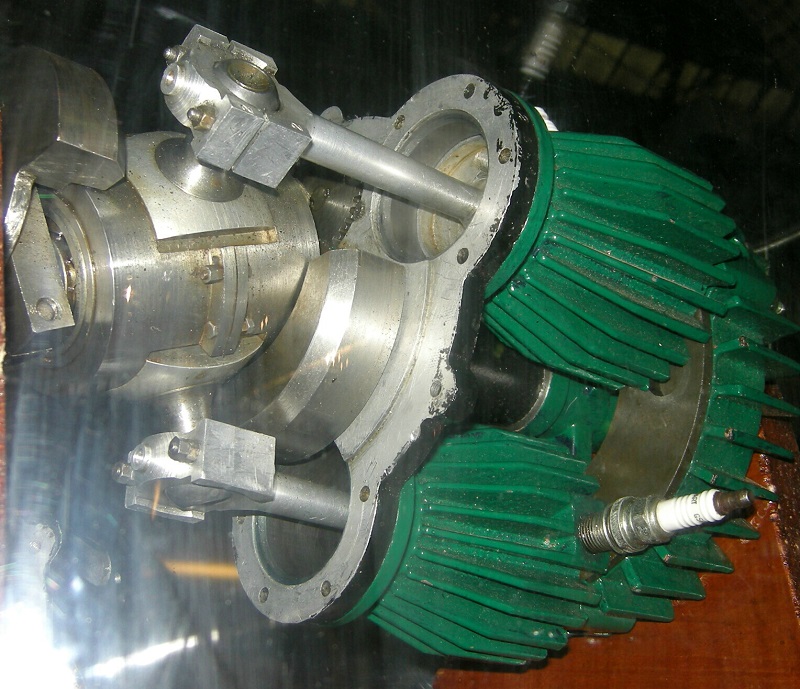 1946 Redrup 'wobble-plate' motorcycle engine. 3 cylinders, 309cc. The design was originally patented by Redrup in 1917. On display at Manchester's Museum of Science and Industry (MoSI) 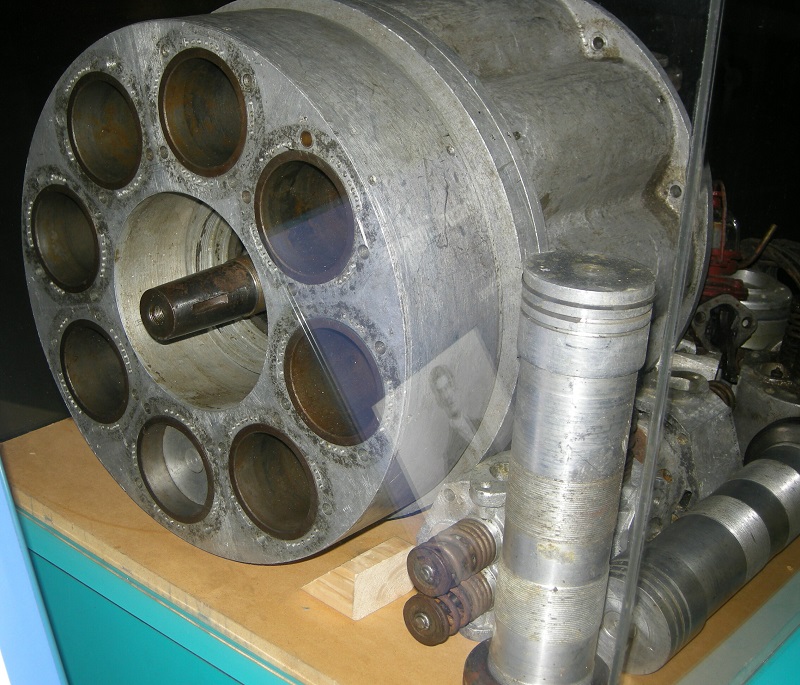 1953 Redrup axial cam aircraft engine, intended to develop 1000 HP. The engine was not completed. On display at MoSI 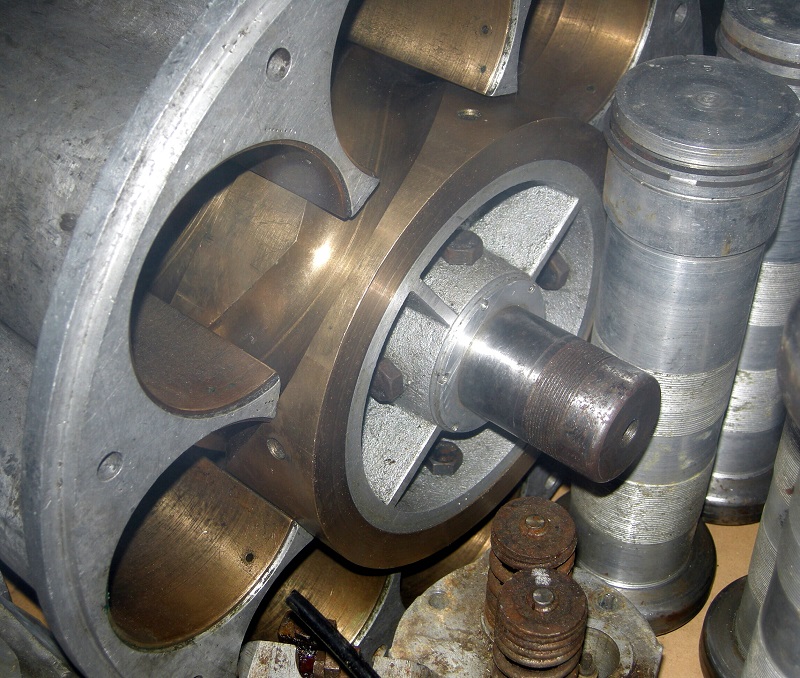 1878 Redrup was born in Newport, Wales, his father moving to Barry, Vale of Glamorgan, shortly afterwards. He was interested in engineering from an early age and his father paid for him to take an apprenticeship with the Great Western Railway company, which he completed in 1897.

Redrup tried his hand in the engine room of a merchant ship on a round trip from Cardiff to the USA, but the rough outbound trip persuaded him against a life at sea.

Connected with R. Stephens, Sons and Co of Clevedon.

He returned to Barry, and entered into a partnership with Alban Richards, the son of a Barry blacksmith, and set up the Barry Motor Co

1904 The 'Barry Engine' first appeared in when it was exhibited at the 1904 Motor Show (Stanley). Designed by Redrup, the engine was a two-cylinder opposed-piston supercharged rotary engine. The engine was incorporated in the unusual "Barry" motorcycle, which retained the pedals of a conventional cycle, with the engine rotating on the forward frame tube between the driver's knees. It was exhibited in London in 1905, attracting a large amount of interest and being reviewed by a number of journals at the time.

Later models of the motorcycle dispensed with the pedals, and the engine was lowered to improve the centre of gravity. No known models of the engine exist but a 5-cylinder Redrup 1912 rotary aircraft engine is in the Manchester's Museum of Science and Industry, while later radial engines designed and built by Redrup are still in existence.

1911 Patent. '...the International Rotary Motors Limited and William Alban Richards have made application for the restoration of the patent granted to Charles Benjamin Redrup and William Alban Richards for "Improvements in and relating to internal combustion engines," numbered 18193 of 1904, and bearing date the 22nd day of August, 1904, which expired on the 22nd day of August, 1909, owing to the non-payment of the prescribed renewal fee....'[3]

1911 Working with the Gyroscopic Syndicate on rotary engines.

In early 1913 Redrup left the Gyroscopic Syndicate and moved to Leeds to form the Hart Engine Co, a partnership of brothers Charles and Alfred Redrup, John Boyle (from the Gyroscopic Syndicate) and his son Walter, and financier Major Arthur Bray, with the intention of producing Redrup's rotary 'Reactionless' aero engines' in a factory in Hunslet. Engines were tested by Vickers in late 1914, and subsequently Vickers agreed to undertake production of the engines in Kent. The project ended in failure, having been badly mismanaged by Vickers.

In 1918 Charles and Alfred Redrup and John and Walter Boyle rejoined forces, establishing Boyle and Redrup to produce radial engines in Leeds.

In 1919 a 3-cylinder 309 cc radial engine for motorcycles was produced. One of the first adopters was Leeds motorcycle builder H. C. M. (Monty) Beaumont. The engine was also sold for industrial use. The "Redrup Radial", as the motorcycle was known, was built from 1919 to 1922 though actual numbers are unclear and probably less than 150. The magazine 'The Motor Cycle' tested the engine and found little to criticize.

1921 Partnership dissolved. '...the Partnership heretofore subsisting between us, the undersigned, John Boyle, of 56, Accommodation-road, Leeds, and Charles Benjamin Redrup, of 8, Roseville terrace, Leeds, carrying on business as Engineers, at 10, St. Stephen's-road, Burmantofts, Leeds, under the style or firm of Boyle and Redrup, has been dissolved by mutual consent...'[4]

Charles Redrup started his own company, the British Radial Co, with an office in the King's Road, Chelsea.

During WWI Redrup had become interested in axial piston engines, and in 1917 he patented an engine having a wobble plate (rather than a swash plate). He built his first example in 1922, a two stroke, having six cylinders with inertia valves in the piston crowns. A marine version was built in 1924 and fitted to a boat, the Redrup 1, which was demonstrated to the Motor Boat magazine, wheo were impressed by the performance and low noise and vibration.

Crossley Motors became interested in Redrup's 'wobble-plate' axial piston engines, and commissioned him to design a 5-cylinder engine based on the marine engine. This was eventually installed in 1927.

In 1925 A. V. Roe, perhaps through their involvement with Crossley's as sub-contractors for car bodies, came to learn about Redrup's axial piston engines and invited him to join them as an engine designer. The Redrup family moved to Heaton Chapel, where Charles set up his home and workshop at 7, Milwain Drive.

A variant of the wobble-plate engine flew in a Simmonds Spartan aircraft in 1929, and was exhibited at the Olympia Air Show in July of that year.

As a result of his engine shown at the Olympia Air Show he was engaged by the Bristol Tramways and Carriage Co to design an engine for them, and moved to Bristol where he designed the Bristol Axial Engine. It was a 7 litre, 9 cylinder, axial piston, wobble-plate type engine. It was originally conceived as a power unit for buses, possibly because its compact format would allow it to be installed beneath the vehicle's floor. The engine had a single rotary valve to control induction and exhaust. Several variants were trialled in Bristol buses during the 1930s, the engine going through several versions from RR1 to RR4, which had a power output of 145 hp at 2900 rpm. After several thousand miles of testing, development was halted in 1936 following a change of management at the Bristol company (The Thomas Tilling Group had bought a controlling interest in the Bristol Tramways and Darriage Co).

The RR3 bus engine described in 'The Engineer' in 1935. Redrup was appalled to find that his boss, Christopher George Nevatt was given all the credit for the engine.

During World War II Redrup worked on secret armaments projects for the Avro Lancaster and other aircraft, including the hydraulic drive for the Vickers Type 464 bouncing bomb which was used in Operation Chastise in 1943.

After the war he designed more motor-cycle engines, including an axial engine, and large 1,000 and 2,000 hp axial piston aircraft engines. A 3-cylinder Redrup 1948 Radial Motorcycle is preserved in the Sammy Miller Museum - it uses a smaller 250 cc version of his radial engine mounted horizontally in a Royal Enfield motorcycle frame, and was assembled by him and his son.

A detailed biography of C. B. Redrup was written by Professor William Fairney in 2006 [5]. This is the source of much of the above information.