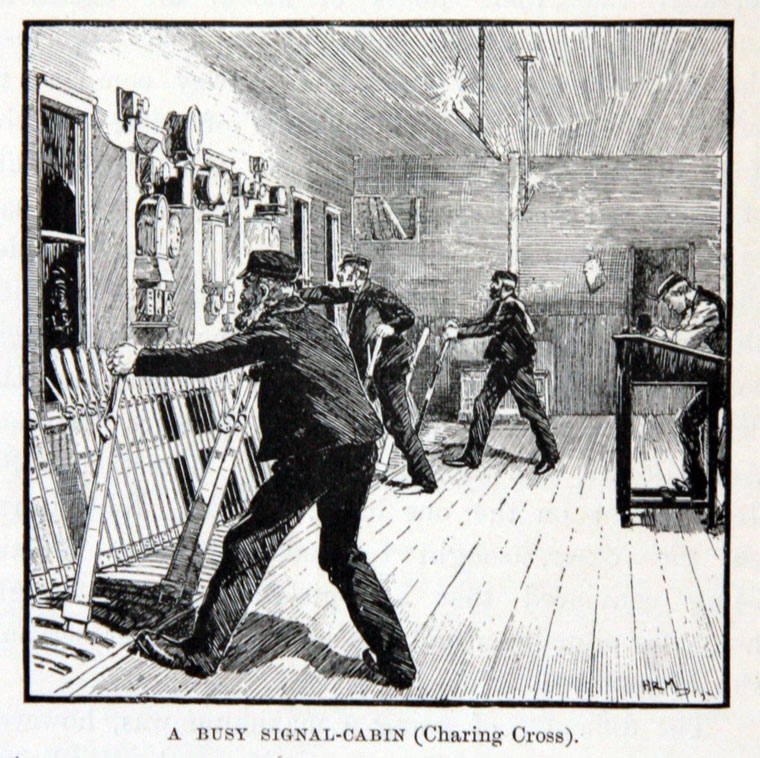 The original station building was built on the site of the Hungerford Market by the South Eastern Railway and opened on 11 January 1864.

The station was designed by Sir John Hawkshaw, with a single span wrought iron roof arching over the six platforms on its relatively cramped site. The curve of the original roof design can still be seen on the interior brickwork.

A year later the Charing Cross Hotel, designed by Edward Middleton Barry, opened on 15 May 1865 and gave the station an ornate frontage in the French Renaissance style. At the same time, a replica of the Eleanor Cross was erected in the station forecourt, based on the original 13th century Whitehall Cross that had been demolished in 1647.

1870 The Metropolitan District Railway built an underground station nearby; John Fowler was the engineer and the contractors for this were Messrs Kelk, Waring Brothers and Lucas.[1]

The elegant original roof structure collapsed on 5 December 1905. By great fortune, only six lives were lost (two workmen on the roof, a bookstall vendor and three passers-by in the street, where most of the girders fell) as the collapse happened outside the rush hour and was sufficiently gradual for the station platforms to be evacuated. An enormous travelling timber gantry had to be constructed to take the remainder of the station roof down safely. The roof was replaced by a utilitarian post and girder structure supporting a ridge and furrow roof.

Following bomb damage in World War II, the elaborate Mansard roof of the upper floors of the hotel was rebuilt in a plain neo-Georgian white brick