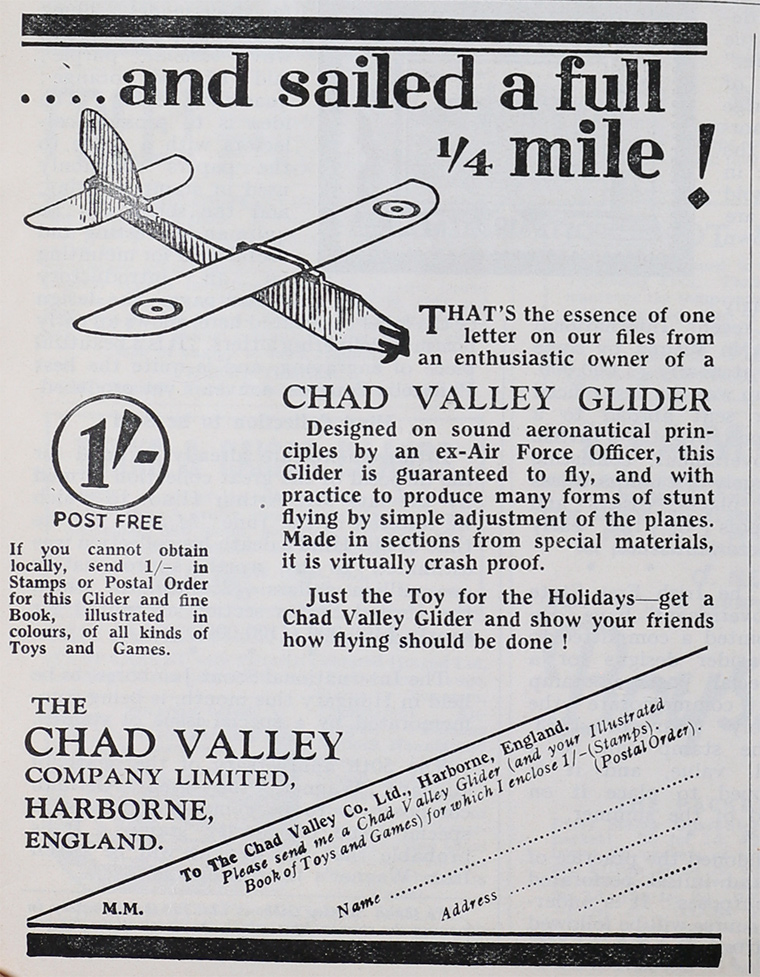 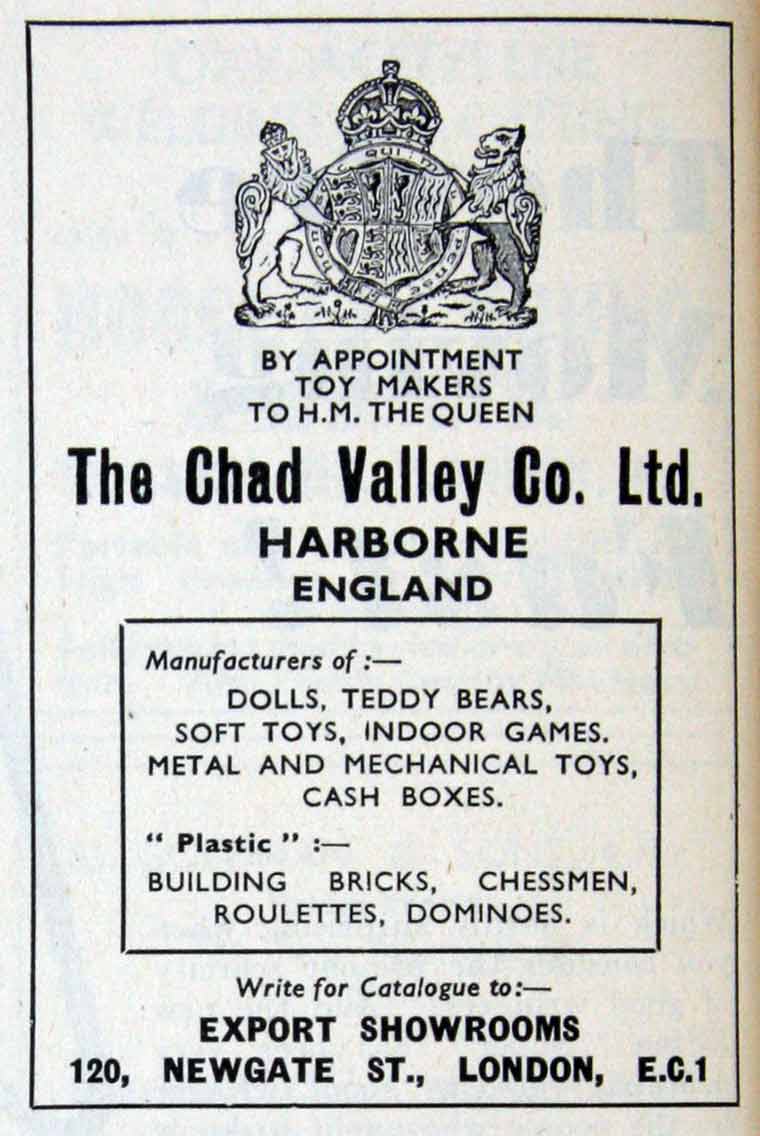 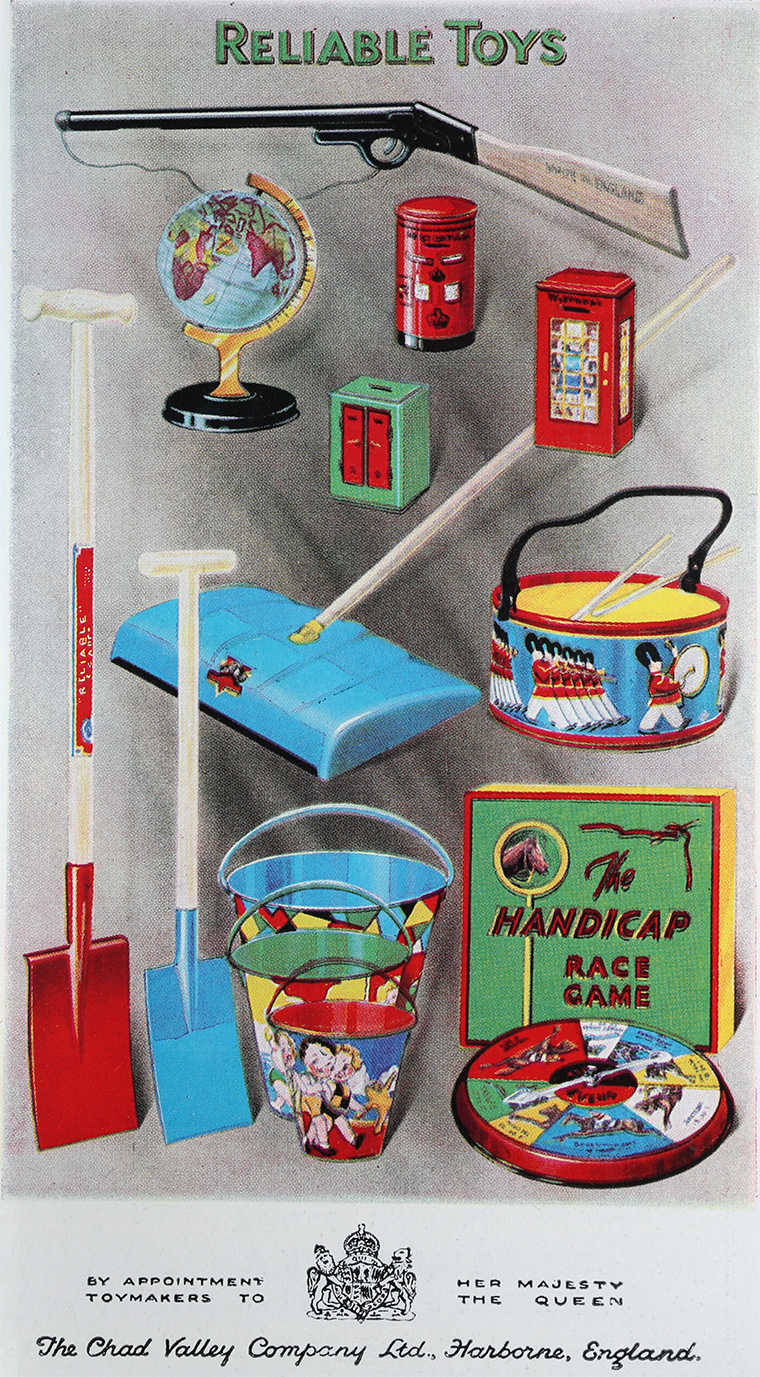 1820 The early history of this company is unknown, but it is thought to have been in business, in Birmingham, by 1820. Set up by Anthony Bunn Johnson, the company was originally a printing and bookbinding business.

1897 The company moved to Harbourne and became Johnson Brothers (Harbourne) Ltd. The new factory, known as The Chad Valley Works, was named after a stream nearby. They later took the name of Chad Valley as their registered trademark. As well as selling stationery, the company also started to produce cardboard games and toys, the range of which was gradually increased. Johnson Brothers may have made brass postal scales as well.

WWI. When the First World War began in 1914, toys and games were no longer imported. Johnson Brothers then began to expand and used the opportunity to increase its range of products.

1915 The company's first soft toys were produced. This was a range of traditional, plush Teddy Bears with jointed limbs.

1916 The company patented a machine for stuffing soft toys.

1919 Post-war expansion was so great that the company acquired the Harbourne Village Institute which was used as a printing works, producing box covers and labels for toys and games.

1920 The soft toy business relocated to Wellington, Shropshire, and a new factory called The Wrekin Toy Works. The firm known as The Chad Valley Co Ltd came about when the three factories were merged into one.

1920s Both the Wellington and Harbourne works were extended as business increased.

1923 The Aerolite, registered ad the company also took over Isaac and Co.

1938 Granted a Royal Warrant as 'Toymakers to Her Majesty the Queen'.

WWII. During the War, the Chad Valley factories concentrated on the war effort, with very limited production of soft toys. Instead, the company manufactured small wooden instrument cases as well as cases used on the barrels of anti-aircraft guns. Other products included: hospital tables, electrical coils and starters, children's clothing, tent poles, charts and auto pilots, .

1950 The company continued its programme of expansion and became a public limited company.

1951 The company acquired the metal toy manufacturing firm of Hall and Lane.

1954 The family business of Roberts Brothers trading as Glevum Toys was acquired.

1967 The company acquired the Chiltern Toys company of H. G. Stone and Co.

By 1960 the company operated seven factories with more than 1,000 employees.

1970s Cuts were made in staff and production.

After 1975, only two factories remained.

The manufacture of soft toys was relocated to Pontypool in South Wales.

1978 The firm was taken over by Palitoy, of Leicester.

1988 The trade name of Chad Valley was acquired by Woolworth's.

2009 The trade name of Chad Valley was acquired by Home Retail Group for approximately £5 million.