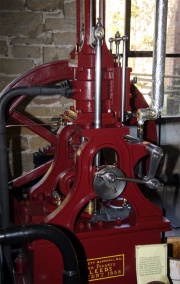 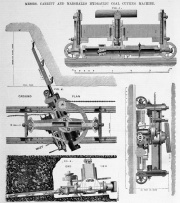 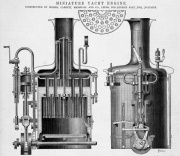 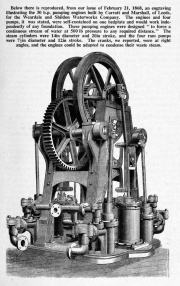 1868. Pumping engines for the Weardale and Shildon Waterworks Co. 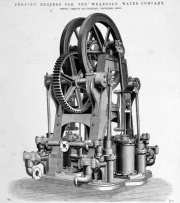 1853 June. The Sun Foundry, Leeds occupied by Carrett and Marshall [1]

1858 This company took over from Shepherd and Todd.

Mr. W. O. Carrett, of the firm of Carrett, Marshall, and Co., Sun Foundry, Leeds, made a noted steam pleasure carriage for Mr. George Salt, of Saltaire, which was exhibited at the Royal Show held in Leeds, 1861, and likewise at the London Exhibition, 1862 (see Fig. 57).

It had two steam cylinders, 6in. diameter and 8in. stroke. The boiler was of the locomotive multitubular type, made of Low Moor iron. The joints were flanged and welded. It had a copper firebox, and there were 58 copper tubes, 2in. diameter. The boiler was 2ft 6in. diameter, and 5ft. 3in. long, giving 100ft. of heating surface, and intended for a working pressure of 150lb. per square inch, the test pressure being 300lb. Clark's steam jet for preventing smoke was adopted.

The locomotive was mounted upon three wheels, provided with springs. The two driving wheels behind were 4ft. diameter, made of steel, with cast-iron bosses. The leading wheel was 3ft. diameter. We shall refer to the steering gear and special method of attachment to the front wheel presently. The boiler was fed by an injector, as shown, as well as an engine pump. There were seats on the carriage for nine persons, including the steerer and the stoker. The travelling speed was 15 miles an hour; and the weight of the carriage, fully loaded, was 5 tons, about four-fifths of which was carried by the two driving wheels, and one-fifth on the steering wheel.

Motion was communicated from the crank shaft to the driving axle through spur gearing in the proportion of five to one. The driving wheels were loose on the main axle, and each was secured upon a hollow shaft revolving upon the main central one; the latter was driven by gearing from the first motion, and carried a pair of central revolving bevel couplings on the inner end of the pipe shaft. The bevel couplings, being free to revolve, became bevel wheels only when there was any differential velocity required to the driving wheels; and thus with both wheels free and always driven, the carriage could turn about in all directions.

Mr. W. O. Carrett, after giving the clear description of the compensating gear used on his little locomotive, acknowledged Mr. R. Roberts, of Manchester, as the inventor.

There was one point respecting the steering gear worthy of note. The leading wheel, besides being held in its place, says Mr Yarrow, "by a vertical forked spindle, which passed through guides, had a parallel motion which transmitted any strains taken by the wheel and given out at the axle to a fixed pin or fulcrum on the frame." Thus the brunt of obstacles on the road was taken quite independently, and the steering was left free from any injurious strain.

Fig. 58 shows the usual method of connecting the front wheel. The wheel is held in position by a forked spindle, which passes through the guide at the top, which was firmly fixed to the frame ; above the guide were the spring and guiding lever. Any obstruction to the forward motion of the carriage had a tendency to break the fork spindle at A B.

Figs. 59 and 60 show the improved method referred to. The wheel in this case is held in position between a forked spindle, but the axle on which the steering wheel revolves is extended on each side, to the ends of which are coupled two links, which connect the front axle and a lever together.

This lever moves on a pin fixed firmly to the framing of the carriage. It will be seen that the wheel can be turned to the right or to the left on the fork spindle as a centre, quite unaffected by the links, which maintain the distance between the axle and the lever under all circumstances the same, and thus the front upright fork spindle is relieved from the injurious strain which we have seen in the former case had a tendency to break the fork at A B.

The following appeared in Engineering 8th June, 1866: "This steam carriage, made by Carrett, Marshall, and Co. (see Fig. 57), was probably the most remarkable locomotive ever made. True, it did little good for itself as a steam carriage, and its owner at last made a present of it — much as an Eastern prince might send a friend a white elephant — to that enthusiastic amateur, Mr. Frederick Hodges, who christened it the Fly-by-Night, and who did fly, and no mistake, through the Kentish villages when most honest people were in their beds. Its enterprising owner was repeatedly pulled up and fined, and to this day his exploits are remembered against him."

Hodges ran the engine 800 miles; he had six summonses in six weeks, and one was for running the engine thirty miles an hour. It was afterwards converted into a self-moving fire engine. But the Fly-by-Night was a good job, and deserved a worthier career.