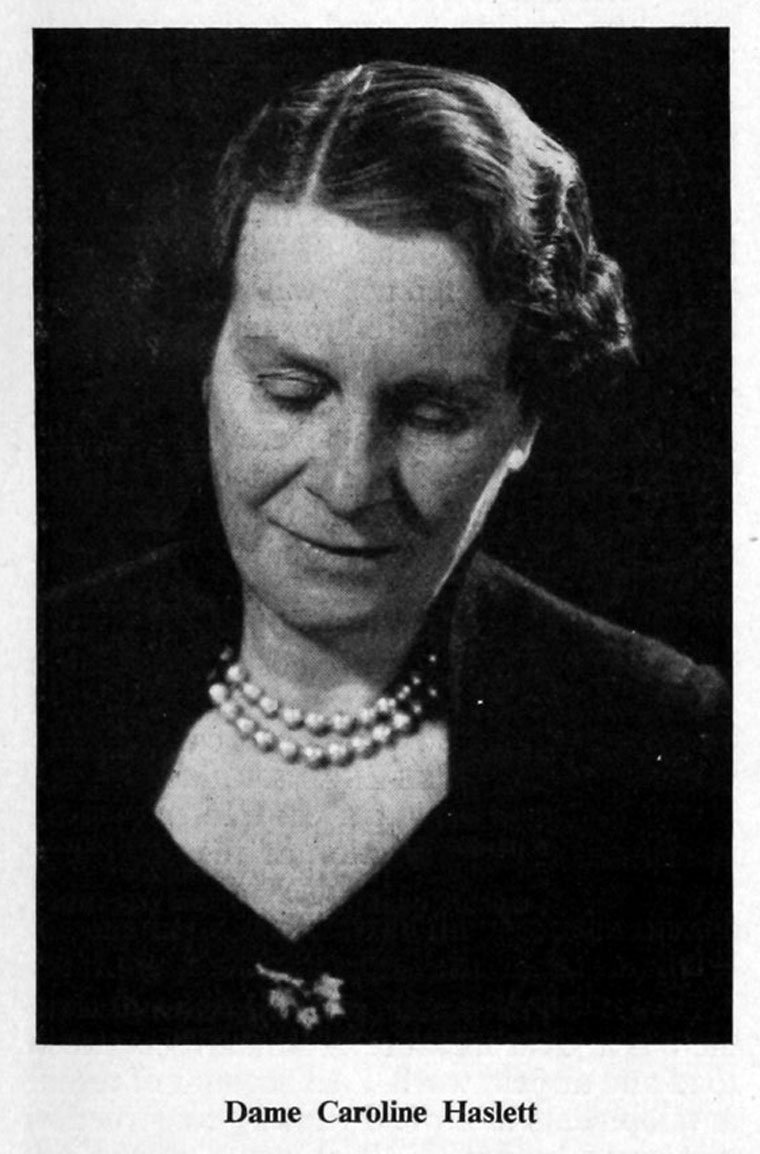 She was the first secretary of the Women's Engineering Society, and the founder and editor of its journal, The Woman Engineer. She was co-founder and first director of the Electrical Association for Women, which pioneered such 'wonders', as they were described in contemporary magazines, as the "All-Electric House" in Bristol in 1935.

1895 August 17th. Born at Worth, Sussex, the eldest daughter of Robert Haslett, a railway signal fitter and activist for the co-operative movement.

After school in Haywards Heath, Haslett joined the Cochran Boiler Company as a secretary. Managing to transfer to the works during the war, she acquired a basic engineering training in London and Annan from 1914 to 1918

In 1919 she became first secretary of the Women's Engineering Society (WES) and was President in 1941.

In November 1924 she co-founded and became the first director of the Electrical Association for Women. She was Chair of the Council of Scientific Management in the Home and presented papers on home management in various countries.

In 1932 the National "Safety First" Association (the forerunner of RoSPA) extended its activities to Home Safety, and Caroline Haslett was appointed as chair of the Home Safety Committee, a post she held until 1936. She became the first woman vice president of the association in 1937.

From 1946 to 1954 Haslett was the only woman member of the Council of the British Institute of Management, and the first woman Chairman (from 1953 to 1954) of the British Electrical Development Association. She edited the Electrical Handbook for Women and Household Electricity.

During the Second World War she was the only woman member of the 20 person committee convened by the IEE to examine the requirements for electrical installations in post-war Britain, part of a larger scheme of Post-War Building Studies. An important part of those recommendations was a new plug and socket standard, the first requirement for which was to ensure the safety of young children it is of considerable importance that the contacts of the socket-outlet should be protected by shutters or other like means, or by the inherent design of the socket outlet. The result was BS 1363.

She undertook several missions at the request of the British and United States Governments and was appointed chairman of the Hosiery Working Party and Honorary Advisor on Women's Training to the Labour Ministry.

In the spring of 1954 she began to show signs of ill health. Following several coronary thromboses she retired to live in the Bungay home of her sister (and biographer) Rosalind Messenger

1958 The Caroline Haslett Memorial Trust was established, to continue the work of the Caroline Haslett Trust (est 1945) to support women working in the electrical industry, and also to provide educational opportunities for women in science, engineering, technology and technical fields other than electrical[1][2]

SINCE the time of the first world war Dame Caroline Haslett has been closely associated with many activities of the engineering and electnc1ty industries of this country. She was well known to a large number of people engaged in those industries, and was known also to numerous others by the prominent part she took in public affairs. All will deeply regret Dame Caroline's death, which occurred after many months of illness, on Friday, January 4.

Caroline Haslett was a native of Worth Sussex, and was educated at Hayward Heath High School. Her association with the engineering industry started during the first world war, when she joined the office staff of Cochran and Co., Annan, Ltd. During her service with that company she asked to be transferred to the works, and undoubtedly the experience thus gained deepened her appreciation of the part that women could well take in technical matters. The work accomplished by women in the engineering industry during the 1914-18 war led to the formation, in 1919, of the Women's Engineering Society, and it was most appropriate that Caroline Haslett should be invited to become its first secretary. As the work of that society progressed, the development of the domestic uses of electricity became more and more marked, and in 1924, Dame Caroline was among those who felt that there was a place for the Electrical Association for Women which was founded in that year.

Dame Caroline was appointed director of the Association, an office in which she continued until her failing health compelled her to resign at the beginning of last year. Her years of energetic work with the Association will be long remembered ; she was convinced that through the wise use of electricity in the home, there could be achieved greater ease and efficiency. Under Dame Caroline's able direction, the Electrical Association for Women has undoubtedly rendered - and continues to perform - a useful service to the community.

Although Dame Caroline's work with the E.A.W. occupied, for over twenty years, so much of her time, there were many services which she ably gave in other spheres. She had the distinction of being the only woman member of the British Electricity Authority when it was formed in 1947, she was at one time chairman of the British Electrical Development Association, a member of the councils of the British Institute of Management and the Industrial Welfare Society, and a member of the Crawley Development Corporation. These were but a few of the public offices that Dame Caroline held; there were many others.

She was a Companion of the Institution of Electrical Engineers, and a Justice of the Peace. The value of her work was deservedly recognised by the award of the C.B.E. in 1937 and of the D.B.E. in 1947.