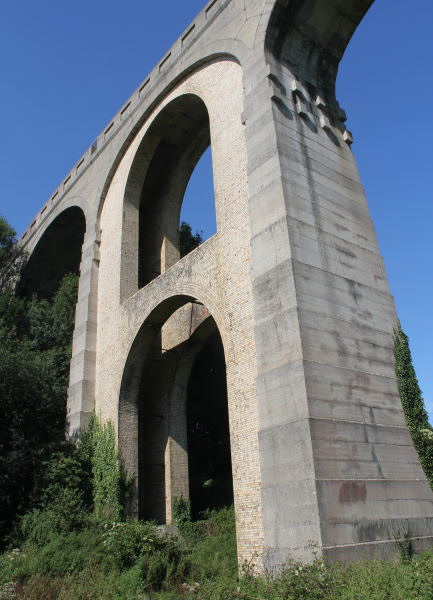 Showing the brick-builtsupport. Also, note that each step of the concrete piers took three pours of concrete 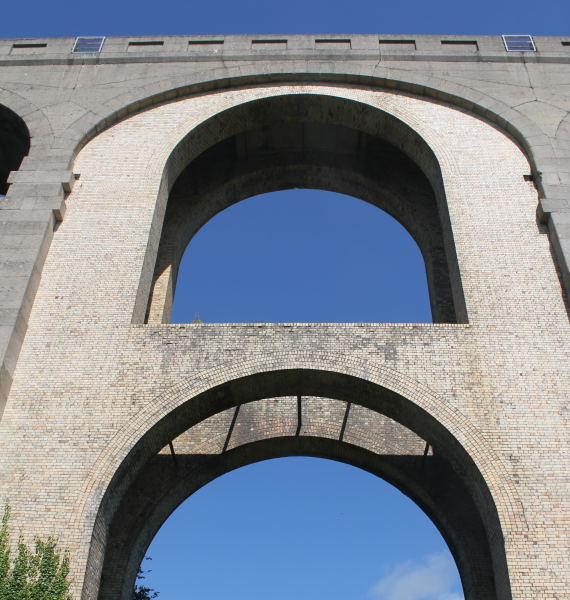 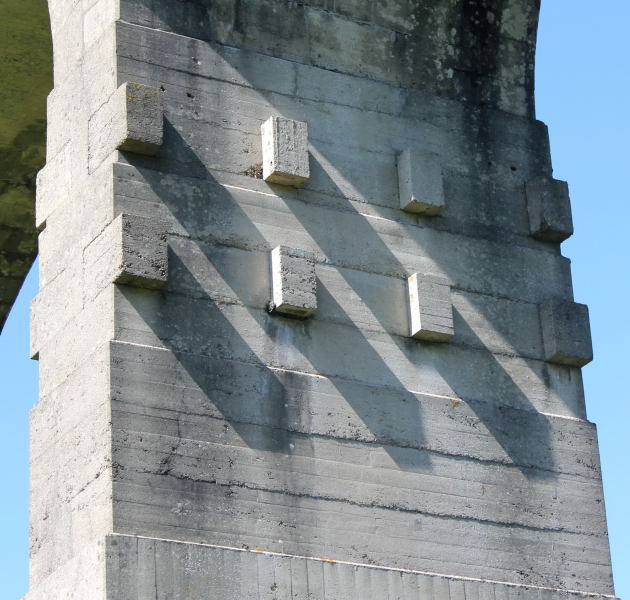 The corbels - protruding pre-cast blocks - would have supported the wooden centring when constructing the arches.

An early concrete railway viaduct constructed in 1901 - 1903 for the railway line between Lyme Regis and Axminster, now disused.

Ten arches, 50 ft span. The voussoirs and corbels are pre-cast, while the rest is mass concrete.

Lime mortar was used for the expansion joints. One pier settled after construction, so the third arch (Axminster end) had to be supported by a brick arch[1] (see photo).

'The engineer is Mr. Arthur C. Pain, of London, and the contractors are Messrs. Baldry and Yerburgh, of Westminster. .......So much has been said from first to last, with regard to the Cannington Viaduct, and so much interest has been evinced in it locally, that some details regarding its method of construction will, no doubt, be welcome. It consists of ten spans of 50 feet each, built entirely of concrete. Another example of such a structure may be seen at Holsworthy on the L. and S. W. Railway. Cannington Viaduct differs, however in some respects from the one at Holsworthy, because it is almost entirety built of mass concrete. The method of working, in brief, has been as follows:—

'After foundations had been put in, short "lifts" were built above the ramp, so that all the piers should start on the same level. Each lift was six feet high, the concrete being put in, in three layers, a reduction of three inches at each end, and one-and-a-half inches at each side being made for the lifts. This was done in order to obtain the tapering necessary for such work. The latter was done entirely without scaffolding from the ground, and this was effected by building in corbels, upon which the rakers of the centres were butted. As the rail level is 90 ft. at the deepest above the bottom of the valley, it will be readily understood what an immense saving was made by this mode of construction. At the commencement of work, the Blondin Cableway was erected across the valley.

'The stones from the tipping of the embankment were picked out and crushed to the required size by a steam-driven crusher, these crushed stones were then mixed with Portland cement concrete, and water to make the concrete. The latter, thus having been made, was loaded into the "skip," hoisted by the cable way and carried to every pier, into which it was about to be built. Before the arch was turned, the centring was put position, the centres being supported by the rakers butting on the corbels, as before described. Laggings were placed upon the centring. Blocks of concrete which had been moulded in specially prepared boxes, and lain for two months, so that they might thoroughly solidify, were picked up by the cable way and placed round each edge the arch. Between these blocks, mass concrete was filled in. Shuttering was then erected for the piers and mass concrete put in to form the haunches. At the present time, the parapets are being built. The work of the cable way has been a source of considerable interest to visitors as well as the natives the place. During the summer months of last year, large numbers of people made a journey to the Cannington Viaduct on purpose to see the work going on. For some time past the viaduct has been the Sunday "show place" of Lyme.' [2]

'AXMINSTER AND LYME REGIS LIGHT RAILWAY,
To the Editor of Western Times.
Sir, —As many unfounded rumours have been spread about the damage done to the Cannington Valley Viaduct on this line by the recent heavy rains, I should feel much obliged if through the medium of the Western Times you would contradict them. The facts of this case are that the recent heavy rains caused a subsidence of the hill on which the two last western piers the viaduct stand.
No material damage has been caused, but steps are being taken to strengthen the structure in case of further movement. The opening the line will probably not be delayed beyond a fortnight or so. Thanking you in anticipation of your courtesy.
Yours truly, CLAUDE PAIN. Spring Cottage, Lyme Regis, Dorset.'[3]