Grace's Guide is the leading source of historical information on industry and manufacturing in Britain. This web publication contains 148,376 pages of information and 233,850 images on early companies, their products and the people who designed and built them.

Train on fire at Abingdon. Picture published in 1894. 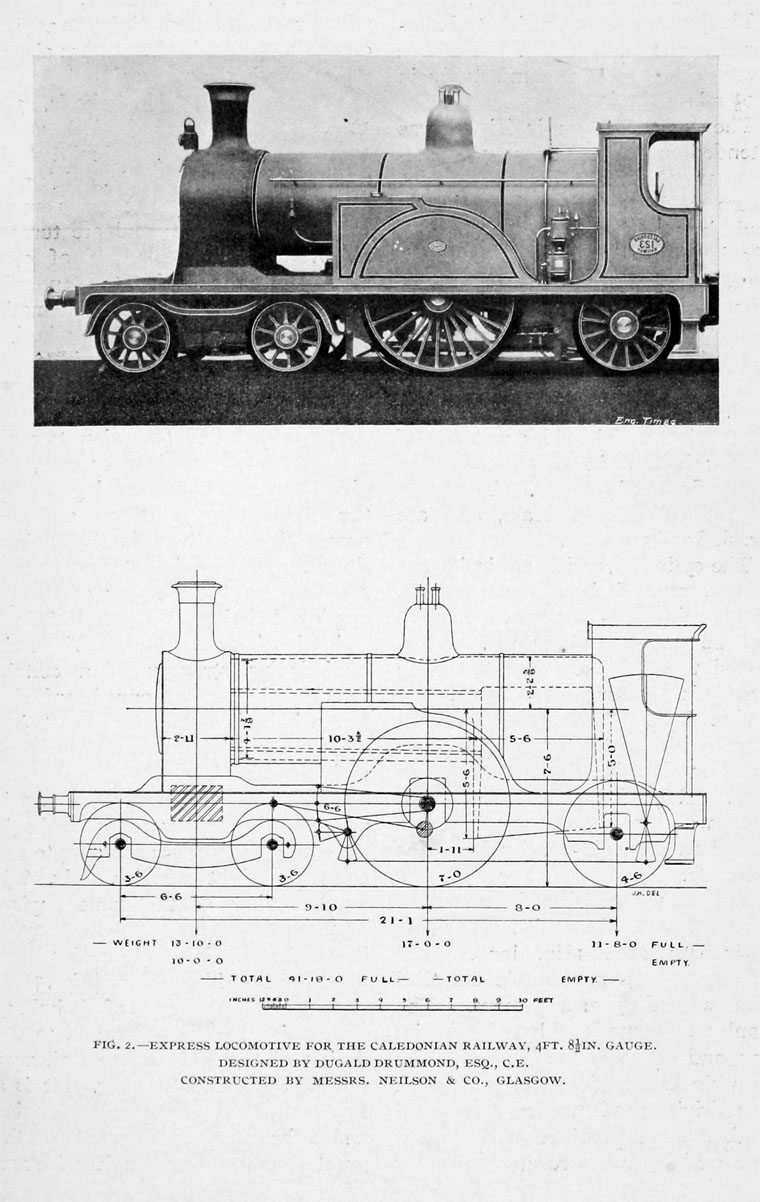 The Caledonian Railway was a major Scottish railway company operating in Scotland. [1]

It was formed in the early 19th century and it was absorbed almost a century later into the London, Midland and Scottish Railway, in the 1923 railway grouping, by means of the Railways Act 1921. Due to legal complications this did not take place on 1 January 1923 when the majority of the amalgamations took place, but was delayed until 1 July 1923 (along with the North Staffordshire Railway).

The company was well supported by Glasgow and Edinburgh shareholders, however more than half of its shares were held in England. It was an integrated railway company, in that it built and owned both the railway lines and the trains. It had a locomotive works, St. Rollox Works, in Springburn, Glasgow, which became part of British Rail and is currently still in use, as a railway maintenance depot.

A railway link from London to the north of England was developed in piecemeal fashion. From about 1838 the London and Birmingham Railway had linked those two destinations; the Grand Junction Railway linked Birmingham to Warrington; the North Union Railway was projected to reach Preston; and the Grand Junction Railway intended to extend the line to both Glasgow and Edinburgh. They got their engineer Joseph Locke to survey a route from Carlisle. The obvious way was to follow Thomas Telford's coach road through Annandale and Clydesdale

The company was formed in the 1830s to link local railways around Glasgow and Edinburgh to the railway network in England, at Carlisle. It sought to open the only cross-border main line (it was thought that only one main line was needed). Its empire was then extended to cover the triangle: Glasgow, Stirling and Edinburgh; and later reached out to serve Oban, Ballachulish, Dundee, Perth and Aberdeen.

1847 Line integrated in the Caledonian opened as follows;-[2]

'The manner in which the pieces of rock, after being blasted or quarried out of their obdurate bed, are conveyed out of the way, is one of the most curious parts of the operations. Two inclined planes of planks, at a slope very little removed from the perpendicular, run from the top the bottom of the cutting. Above are ponderous frames over which ropes pass, one end fastened to a wheel barrow, the other secured to a couple of horses. When a barrowful of stuff is ready a navy fixes the rope firmly to the borrow, secures the load from falling by an extra board, and grasping the handles of his barrow in vice fashion, allows himself, barrow and all, to be drawn up by the horses above; emptying it of its contents, he descends in a similar way, running his barrow down, the horses pulling back and preventing undue acceleration in the hazardous descent. On the lower part of the cutting there are eight machines drilling holes for blasting purposes. These are each worked by nine men, eight of whom turn the driving wheel, while the ninth attends generally to the machine, and keeps the drilling rod at a low temperatare by plentiful supply of water. This drilling machine, invented in America by an Englishman, consists of a ponderous rod sharpened at the lower end, but so shaped that it forms a round hole in the solid rock; the rod alternately raised and depressed by means of the wheel; and, coming down with great force, cuts out a shave of rock at every fall. In the evening, when the holes have been finished, they are charged with gunpowder, the machines removed, and general blasting takes place. The introduction these machines has facilitated operations very much. Beyond the upper portion of the heavy cutting, a hugh [huge] iron tank, open of course at each end, has been laid down, over which it is intended to bring the Evan water, as the level of the line is below that of the stream.'

The reference to the 'iron tank' is interesting, because Snell described it as an aqueduct combined with a road bridge made from wrought iron plates, making it a very early example of such a bridge. The designer was Isaac Dodds.[4]. Note: Evan Water is more commonly known as Elvan Water'

Glasgow passengers passed over the Garnkirk line to Glebe-street until November, 1849, when a line from Milton Junction to Buchanan-street Station was opened.

In the Scottish Lowlands it competed against both the Glasgow and South Western Railway (G&SWR) and the North British Railway but, in the case of the G&SWR, not north of the River Clyde. There was little or no competition north of Oban, Ballachulish, Dundee, Perth and Aberdeen; this area was served mainly by the Highland Railway.

1914-23 William Pickersgill was Chief Mechanical Engineer of the Caledonian Railway.

1923 Incorporated in the London, Midland and Scottish Railway