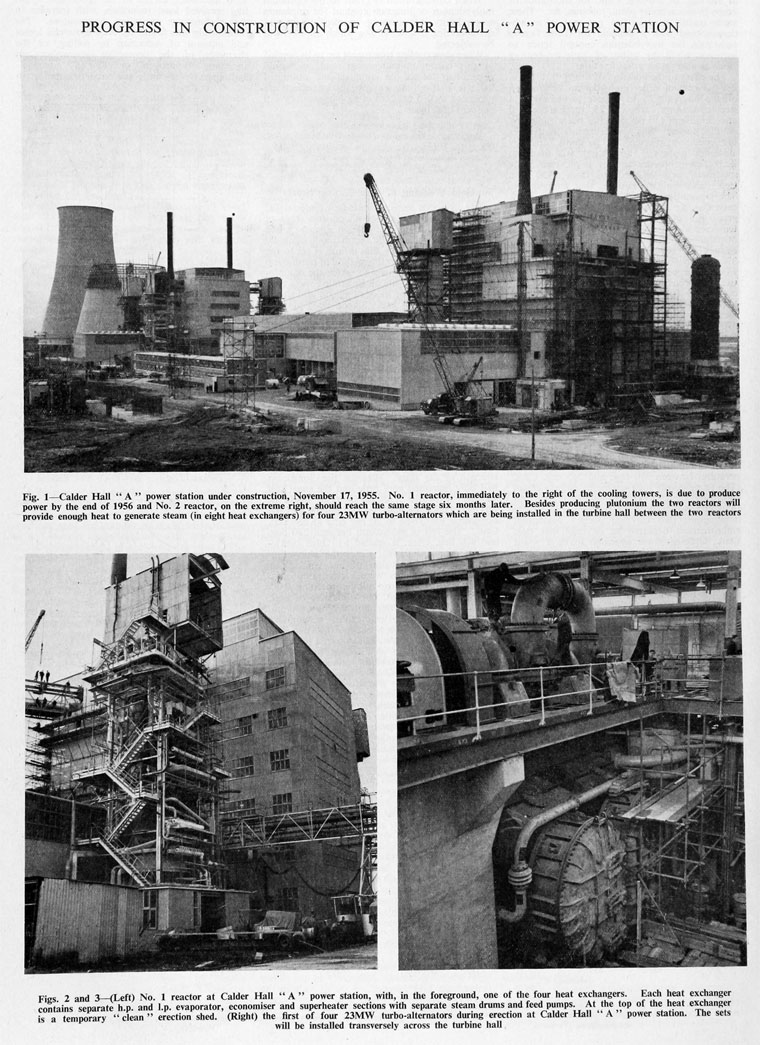 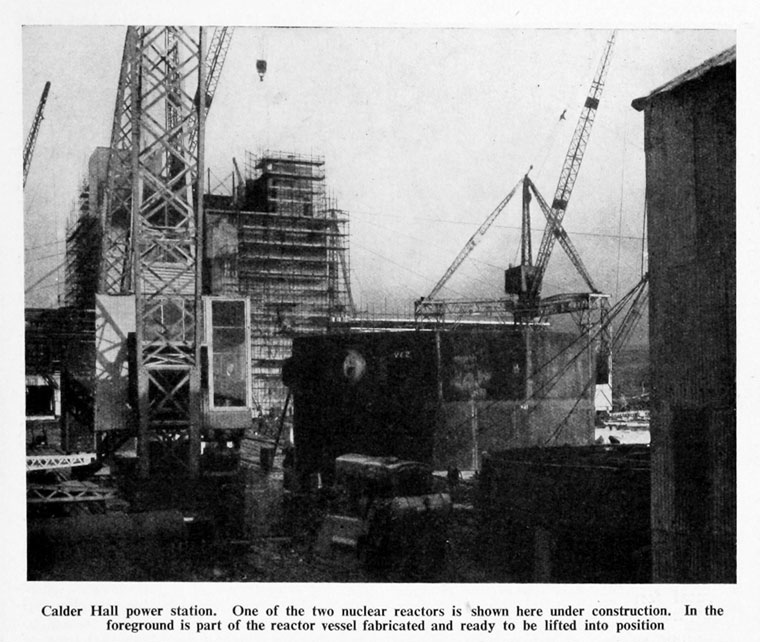 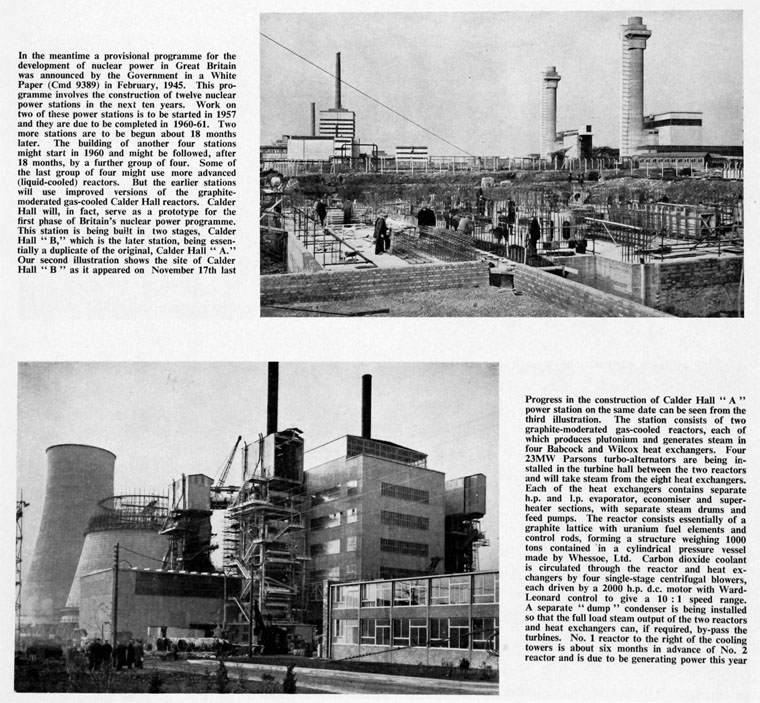 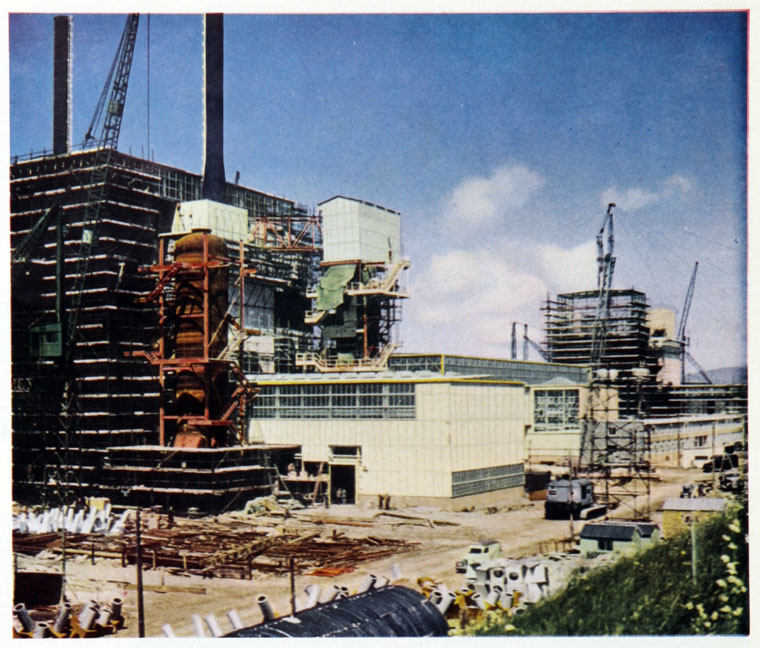 1956. At a fairly early stage in its construction.

The first nuclear reactor to supply electricity to a public power system was at Obninsk in the USSR, in 1954. Its output was about 5 MWe.

Calder Hall was the world's first large scale commercial nuclear power station. It was designed to produce plutonium for nuclear weapons and to generate electricity on an industrial scale. The initial output was to be about 90 MWe from two reactors, to be doubled with three years with the addition of two more reactors. In fact it would be later uprated to a higher output.

The background to the project was the intention of the Ministry of Supply in late 1951 to develop a small pilot plant at Harwell, named PIPPA (Pressurised Pile for Producing Power and Plutonium). In 1952 this idea was abandoned in favour of the full scale plant Calder Hall, and this inherited the named PIPPA. In 1952 input was enlisted from other bodies and contractors, including the British Electricity Authority (later the Central Electricity Authority), C. A. Parsons, Babcock and Wilcox and Whessoe. During the design stage, the emphasis was changed to optimise the production of plutonium over electric power. This resulted in a reduction in heat input available to generate steam. However, the designers opted to specify larger boilers and turbines, at increased capital cost, to maximise electrical output.

Although the output of the turbines was quite small, even by the standards of the day, they were relatively large physically, in consequence of the low steam conditions with which they were supplied. They were mixed pressure turbines, the high pressure steam being supplied at just 200 psia, 595F, and the low pressure at 52.7 psi, 340F. The control system was quite complex, being required to modulate the HP & LP admission valves and the HP & LP dump valves.[1]

C. A. Parsons were also responsible for the CO2 gas circuits and the variable speed gas circulating blowers. The blowers were driven by DC motos controlled by the Ward-Leonard system.

The heat exchangers were produced by Babcock & Wilcox. The shells of the vessels were each fabricated in ten section in Renfrew and transported by road for site assembly. One of the parameters dictating the dimensions was that the components had to pass through the narrowest part of Egremont village!

Construction started on 1 August 1953. Remarkably, given the pioneering nature of the plant, the first reactor went critical less than 3 years later, on 1 May 1956. The first grid connection was on 27 August 1956.[2]. The achievement is remarkable, especially given the hurdles to be faced in selecting suitable materials and parameters for everything from the reactor core material, cooling media, fuel canister material, etc, all against the background of limited knowledge about the effects of irradiation on materials.

Each of the reactor buildings contained a gas-cooled Magnox type reactor, consisting of a graphite core enclosed by a cylindrical steel pressure vessel which, in turn, was surrounded by a concrete biological shield 8 ft thick. It was attached via the primary cooling circuit ductwork to four heat exchange towers. In the Turbine Hall the steam from each of reactor's heat exchangers was converted to electricity by two C. A. Parsons steam turbines which each had an original rating of 23 MWe, later uprated to 30MWe. Although the gross electrical output per reactor was 60 MWe, 11 MW of this was required for works power.

There were two cooling towers, each 300 ft high, and cooling water was obtained from the River Calder.

The size of the steel pressure vessel dictated fabrication on site using components formed and prefabricated in Whessoe's works. On completion, the entire vessel was stress-relieved at 600 degC using 1500 kW of electrical heat.

The first of the four Calder Hall reactors was commissioned in 1956.

1958 The second reactor at Calder Hall was commissioned[3].

By April 1959 a total of four reactors had been commissioned, supplying steam to eight turbine generators.

Calder Hall had the first Magnox reactors in the world, a design which was later adopted both in Britain (e.g. Chapelcross and Berkeley) and abroad.

Generation ceased in 2003. The longest-serving reactor operated for 47 years, a tribute to all concerned, especially given the range of novel problems that had to be addressed at the outset.

There was a sister plant at Chapelcross, Dumfriesshire.