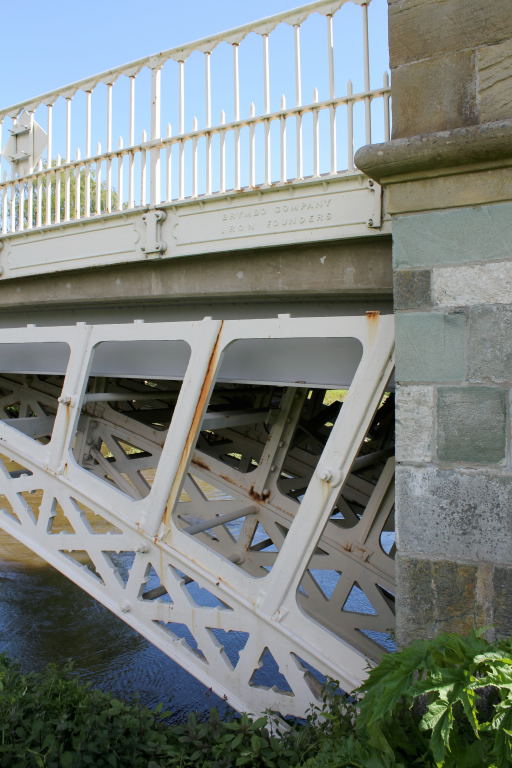 This shows how the original deck has been replaced by steel beams and reinforced concrete, raising the road level relative to the original iron structure

This iron arched bridge carries the B4385 over the River Severn to join the A483, west of Montgomery and south of Welshpool, Powys, mid-Wales

It was designed by Thomas Penson, and the ironwork was produced by Brymbo Ironworks in 1858.

It is one of three of Penson's large cast iron bridges in the locality, the others being Llandinam Bridge and Abermule Bridge. However, this bridge has been extensively altered to increase its capacity. The modifications have been cleverly done so as not to spoil the historic character of the bridge.

See here and here for more information about the bridge and its location.

The appearance of the spans bears a superficial resemblance to that at Llandinam Bridge. However, the design has moved away from the 1846 bridge, which was strongly influenced by those constructed by Telford and Hazledine 20 - 30 years earlier.

The arch ribs are broadly similar, except for the provision of flanges at the intrados and extrados (and for the elimination of the ornamental 'thorns' on the diagonal members. Unlike Llandinam, there are no transverse 'lattice cross plates. The biggest difference lies in the spandrels, which have simple castings having radial members between the upper and lower members, rather than the slender 'lattice' arrangement used at Llandinam. Dovetails provided the connection between the spandrel castings and the arch ribs, and the spandrel castings and the deck plates.