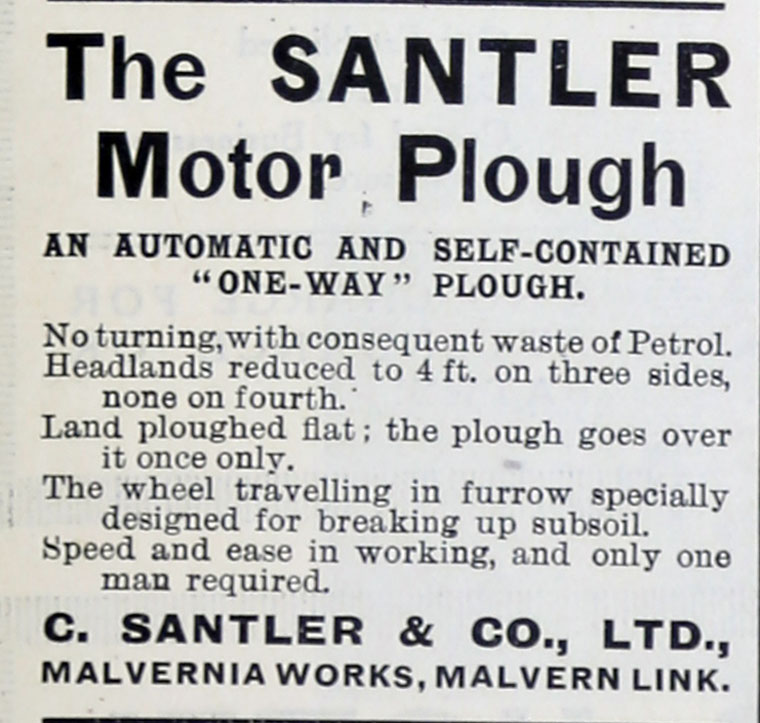 Santler was a motorcycle produced in 1897 by Charles Santler and his brother Walter Santler in Malvern, Worcestershire.

1887 They moved into the bicycle business and designed a small steam engine which they had running in 1889 and installed in a four wheeled chassis. All of this was being done in their spare time while the business moved on to electrical installation with small generators run by steam or gas engines or water turbines.

They then combined the bicycle with the generating set, with the engine mounted above the front wheel, which it drove by belt. The idea was not taken any further.

1889 Exhibited at the 1889 Sanitary Congress and Exhibition in Worcester. 'Messrs. Santler and Co., of Malvern Link, show a "Malvern Safety" bicycle with rubber non-vibrating handles, and partly nickelled. The machine weighs only 35 lbs., and is capable of carrying a man of 12 stone weight. They show two small horizontal engines fitted with the latest improvements. The larger of the two is fitted with expansion gear and the smaller with link motion'[1]

One of their clients was the mother of pioneering motorist Evelyn Ellis. Using the expertise gained with small engines, Charles adapted one of the gas engines to replace the steam engine in their experimental car. The fuel was compressed town gas stored in a tank under the chassis, but this was heavy and gave the car a limited range.

Around 1894 the engine was replaced again by a single-cylinder petrol one. There has been some controversy over the exact date this was done but in 1986 it was confirmed by the dating committee of the Veteran Car Club of Great Britain. The car still exists but not with the original engine.

1897 A new and improved car was built, but again the work from their main business kept vehicle production as a spare-time activity. They may also have made some motorised bicycles.

1897 August 'The entrance avenue was illuminated at night by electricity by Messrs. Santler and Co, of Malvern Link.'[5]

1901 A further car, a two-seater, was made but still with a single-cylinder engine, now mounted at the front, with belt drive to a central gearbox and chain to the rear wheels. It was subsequently converted to four seats.

A larger four-seater followed in 1907 followed by another gap until a new model appeared in 1913 with a four-cylinder Dorman engine. This was the first Santler to be advertised for sale, with a two-seater at £175 and four-seater at £190. There was also a van. It is not known how many were made.

WWI The First World War stopped further developments, and the factory was turned over to military work.

After the war the brothers tried to sell a motor plough they had developed from 1910 onwards, but this was not a success.

A lone experimenter who produced a primitive car during the 1880s was Charles Santler of Malvern Link, Worcestershire, who claimed to have helped Karl Benz build his first car in Germany in 1885-86. After his return to England, Santler began developing a steam car, but fitted it with a petrol engine in the early 1890s. Since he had no intentions of building cars for sale, to the public, Santler carried out many of his trials on the private estate roads of nearby Madresfield Court to escape attention. [7]