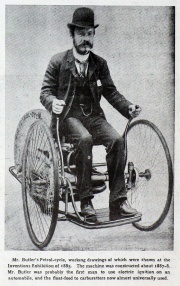 Butler were motorcycles first designed in 1884 and produced until 1897.

1884 The world's first petrol-engined tricycle was patented by Edward Butler (this was a year ahead of Gottlieb Daimler in Germany). It had a single rear wheel, a single seat between the front wheels and a horizontal twin-cylinder engine operating on a Clerk two-stroke engine with pump compression running at around 100rpm. Its cylinders went either side of the rear wheel, directly coupled to it by curved connecting rods. That design was never built.

1888 A revised version, named the Petrol-Cycle ran. It had a four-stroke engine and a reduction gear to allow it to run at 600rpm. It was water-cooled with coil ignition and a jet carburettor supplied by a float chamber. Mr Charles T. Crowden who was connected with Mr Butler in its manufacture, stated the machine worked fairly satisfactorily. He states its particulars below:-

"The machine has two steering wheels in front and one driving wheel behind. On each side of the driving wheel are mounted two power cylinders, driving direct without intervention of gearing by means of two connecting rods and the cranks. Between the steering wheels is fixed a seat for the rider, and on each side are fitted two handles for the rider to steady himself at high speed, and at the same time manipulating the steering wheels. Each steering wheel is fitted with a powerful band brake actuated by a foot lever. Another foot lever was also provided for raising the driving wheel from the ground to start the motor running, and by taking the pressure of the foot slowly off the lever the driving wheel was lowered to the ground of raised as required. The mudguard over the driving wheel was in the form of a water tank and was used for supplying water to the jackets if the power cylinders. Petroleum was carried in a small vessel under the sea, from which it passed through a novel form of vapourise, and thence to the cylinders, as required. To ignite the explosive mixture a small Wimshurst machine was tried, and this was soon abandoned for a Rhumkorf coil and battery, The direct driving was also given up and a fly wheel was fitted on the driving wheel axle, driving the road wheel by means of an ingenious gearing which allowed the more to run at an increased number of revolutions.

The motor possesses some very novel features and at the time the machine was made there were scarcely any oil motors known. I might say that the Butler oil engine is now being made by a larger firm in this country. Had Mr. Butler and his friends constructed an oil engine before the tricycle, which after it was made could not be used in this country, there is no doubt that the Butler oil motors would have been the best known oil engines of today. - The Autocar 1895-1896 Volume 1.

1889 It was first used and called an Inspirator by its designer.

1890-1897 The original design could only carry one person, so a later version was designed to carry three people - two at the front, between the twin wheels, and the driver at the rear. This is thought to have been a Bollee built by Humber and fitted with the Butler engine. At that time, British legislation was very restrictive and although the clever design was advanced for the era, its backers moved on to other fields. The patents were bought by Lawson Co but never progressed any further.

Butler is credited with inventing or developing the spark plug and coil ignition, magneto and the spray jet carburettor, as well as the word 'petrol'. His Petrol-Cycle was broken up for scrap in 1896, the few remaining pictures of this first British motorcycle are in the Science Museum in London.