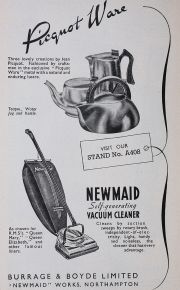 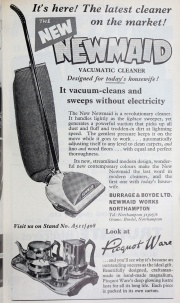 1932 Burrage and Boyd was a company formed in 1932, which produced Non-Electric Vacuum Cleaners. The main components were of cast aluminium. The company was based in Northampton where they had an aluminium foundry.

The success of this venture made the owners look for additional products that could be made with the technology they had, namely casting, machining and finishing. After market research they decided to manufacture a range of high-class tableware, starting with a 3-pint kettle made from one casting and fitted with wooden handles. After consulting metallurgists they found that by adding magnesium to the aluminium, a “silver like” look could be obtained after polishing.

1939 The K3 Kettle was ready to be launched at the British Industries Fair in Birmingham. Unfortunately the outbreak of the Second World War war stopped these plans and the whole factory went over to ammunition production.

Mid-1945 The Ministry of Production allowed development work to begin on non-warwork, in order to prepare for peace.

1946/7 Jigs and tools were made for the kettle and this was finally released at the B.I.F. in 1946-47, under the trade name “Newmaid”. The kettle was well received by consumers and the factory was soon producing over 1000 per week.

The success of the kettle led to the introduction of a six-cup teapot in 1947-48; followed by a hot water jug, cream jug and sugar bowl - all in 1949. The serving tray, also introduced in 1949, was originally made to display the four pieces in the shops but had to be put into production as the customers liked it and it sold well.

1951 The kettle was chosen for the “British Can Make It” Exhibition in London, and later chosen to be exhibited by the Design Centre. It was at this time that for marketing reasons the name was changed to Picquotware.

1952 The introduction of another range consisting of teapot, cream Jug and sugar bowl. Also in the 50s, the method of production was changed, leading to a slightly modified teapot.

1970 A coffee percolator was introduce. Unfortunately this was a manufacturing nightmare and the line was discontinued after only making about 300 units. Also in the 1970s, a griddle was made for a very short period.

In the last half of the '70s the company designed and started making a range of heavy duty saucepans.

1980 However, due to their bankers unexpectedly foreclosing on the loan, the company had to go into receivership. The Picquotware brand-name, together with the saucepan business, was sold to Metal Box PLC. The TB range was then manufactured under the trade name “Newmaid”.

1985 The Picquotware brand-name was bought back by the company the range continued to be sold as that.

Although many competitors were switching to plastic handles, Picquotware retained the distinctive sycamore wooden handle and lid lifters. It was felt that no plastic could imitate the grain of real wood.

1986 During 1986, WPP Group plc became the parent company of Picquotware.

1987 In November, a fire destroyed the Northampton factory, but some of the tools and dies were saved. Production re-started at another WPP group factory located at Burntwood in the West Midlands.

2004 In November, Wire and Plastic Products Ltd, part of the W.P.P. Group plc, closed the Burntwood factory and stopped manufacturing Picquotware. In December, all the assets, tools and intellectual property rights were acquired by Picquotware Ltd.